The Supreme Court is a disaster. Plain and simple. Packed with right-wing conservatives, it is redefining the meaning of religious freedom. The authors of the First Amendment to Constitution wrote a highly ambivalent section that contains the Establishment Clause and the Free Exercise Clause. The interpretation of these two clauses has been a subject of almost continuous debate since they were written.

The general interpretation of the Free Exercise Clause established over that time has been that people are free to do and say and think whatever they like about their religious beliefs, as long as those actions do not harm others. Recent decisions by the increasingly extremist Court have eroded that interpretation, affirming that discrimination against people on religious grounds is permitted. But the latest outrage triggered an editorial in Church & State magazine when the Court decided that churches could hold large gatherings of people during the pandemic, even though similar secular groups were prohibited from doing so. Rachel Laser, the President and CEO of Americans United for Separation of Church and State issued a statement decrying the decision. Here are some parts of it.

Once again the Supreme Court has misconstrued religious freedom to mean religious privilege and placed the health of the American people in jeopardy with an order that allows houses of worship to evade sensible public safety regulations curbing large gatherings during a pandemic. State orders restricting large gatherings, religious and secular, are for the common good. This is a time for shared sacrifice.

Tragically, the court’s embrace of a radical definition of religious freedom and its unwillingness to uphold public health officials’ common-sense rules are actively undercutting our national effort to keep everyone safe and healthy.

The Court’s rulings overturned laws in New York and California prohibiting such gatherings, while virus cases are overwhelming medical facilities. It is abundantly clear that such gatherings are exacerbating the problem. The principle of “exercise your religion, but do no harm to others” has not been redefined. It has been thrown on the trash heap. Religious freedom, as defined by these decisions, means religious privilege. That contradicts everything the founders of our nation advocated, but more importantly, it contradicts more than a century of precedent in the interpretation of those clauses in the Constitution.

I shudder to think what the “Gang of Six” on the Supreme Court will do next to undermine our secular nation and steer us toward theocracy.

February 6, 2021
GOP: Grift, Dictatorship and a Fundamental Lack of Principle.
Next Post 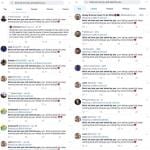 February 7, 2021 Political Bots Being Used to Sway Opinion
Recent Comments
0 | Leave a Comment
"you can always say that God should step in and prevent less pain & suffering, ..."
Carstonio Do We All Have “Sufficient” Evidence ..."
"My people survived the genocide against indigenous peoples carried out in North America. Can we ..."
AtticusOSullivan Right-Wing Bias in the MSM? Reporting ..."
"Ah, the beginnings of a pun thread. Camelbert sandwhiches?"
guerillasurgeon Debunking the Exodus I: Chronology
"Mind you, it must be dreadfully difficult for graduates of Bob Jones U. to be ..."
Luke Breuer Debunking the Exodus I: Chronology
Browse Our Archives
get the latest from
A Tippling Philosopher
Sign up for our newsletter
POPULAR AT PATHEOS Nonreligious
1

Nonreligious
Debunking the Exodus I: Chronology
A Tippling Philosopher

Nonreligious
Right-Wing Bias in the MSM? Reporting on the...
A Tippling Philosopher
TRENDING AT PATHEOS Nonreligious