There are three legs to the stool upon which public opinion over Trump and the impeachment sits: God, the GOP as a tribal entity, and conservative media in its incurably rabid form. Nothing exemplifies this more acutely than the letter that Adam Kinzinger, an Illinois Republican House Representative who voted to impeach Trump, received from his own family. It’s a pretty torrid and shameful affair.

Kinzinger voted with his conscience, he did the correct moral thing, and he has been disowned by his family and claimed to be possessed by the devil for doing so.

You have to read this: 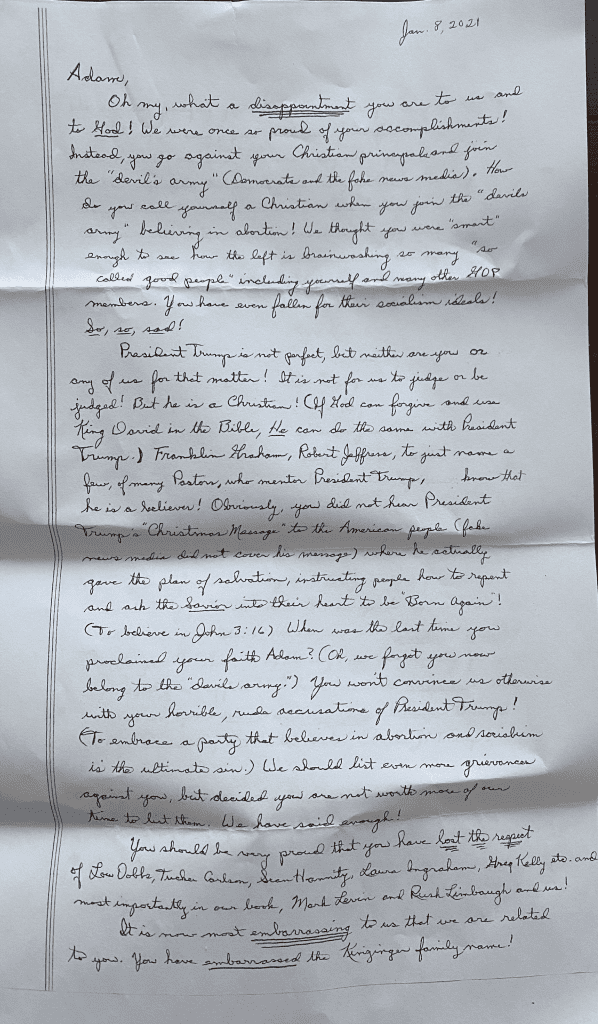 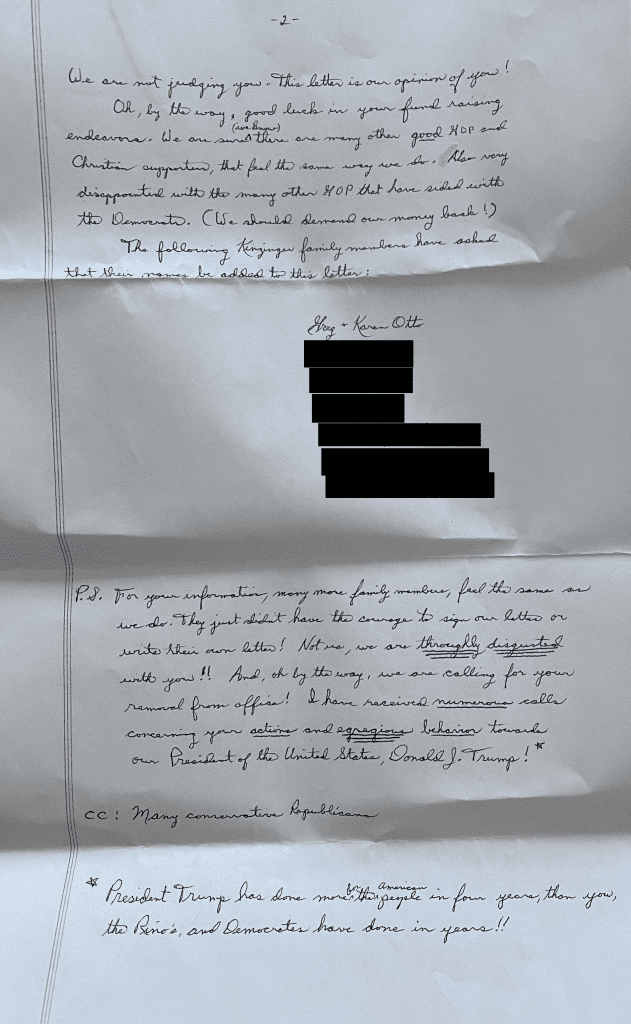 Kinzinger was on NBC’s “Meet the Press”, where the letter came to light:

Kinzinger was on the show promoting a new political action committee he launched to challenge the far-right takeover of the Republican party, which the congressman says “peddle[s] darkness and division.”

“Take a look at the last four years, how far we have come — in a bad way — how backward-looking we are, how much we peddle darkness and division,” Kinzinger said, “And that’s not the party I ever signed up for. And I think most Republicans didn’t sign up for that.”

In the two-page letter, Kinzinger’s family said he embarrassed their name by breaking with Trump, called Democrats the “devil’s army,” and rebuked him for losing the respect of several conservative talk show hosts. They also accused him of falling for the Democratic party’s alleged “socialism ideals.”

“Oh my, what a disappointment you are to us and to God!” the letter dated January 8 read. “We were once so proud of your accomplishments.”

“You should be very proud that you have lost the respect of Lou Dobbs, Tucker Carlson, Sean Hannity, Laura Ingraham, Greg Kelly, etc., and most importantly in our book, Mark Levin and Rush Limbaugh and us!” it continued. “We should list even more grievances against you, but decided you are not worth more of our time to list them.”

The letter also included a postscript, which noted that many other Kinzinger family members feel the same about him.

The letter is pretty much a comical attempt to put every talking point into play in way that is as offensive as possible given it is written to family member. He is well justified to jettison these loons as far from him as possible. What do you expect when you appear to receive your news and information from a bunch of race-baiting, culture wars-perpetuating, right-wing nutjobs?

Bu the thing that takes the biscuit is the claim that Trump is a Christian.

Let me remind you:

He can barely read and sure as hell hasn’t read the Bible, let alone ever shown any knowledge of it. But to then accuse Kinzinger himself of not publicly affirming his faith enough?

I would love to meet these unfortunate people, to sit down and have a long and utterly fruitless debate with them…

February 16, 2021
Surveying the Rubble of the Ruins Left after January 6th
Next Post