Surveying the Rubble of the Ruins Left after January 6th

The insurrection happened, the second impeachment happened. The vote happened, the fallout is happening. Many people are depressed about the state of democracy now in the US, and whether this ruling sets a precedent for a January Exception.

Let me throw in a little bit of my analysis, for what it’s worth.

Trump has been quiet. It’s been lovely.

Trump without Twitter has made for much calmer public discourse. It has been hugely beneficial for all concerned, and probably even Trump himself. He almost certainly would have put his foot in his mouth a number of times.

A Twitterless Trump is a much more acceptable Trump.

In other words, if we have to have Trump, let’s hope he’s silent.

An excuse as opposed to a reason

The vote was completely as to be expected. US politics is as divided, polarised and tribal as it ever has been. The House Managers thrashed the very poor defence team. Injury Lawyers ended up throwing as much excrement at the wall in the hope that anything would stick for the defence. None of it stuck, but there was enough of a smear for Republican lawmakers to point and shout.

The House Managers were excellent. They did what Democratic campaigns often do – attempt to sway the public (the lawmakers were not for swaying) with facts and rational argument.

There is no doubt that left-leaning voters will have been completely persuaded by the House Managers for they didn’t really need persuading. I would be interested to see if the centre was persuaded – they should have been. The right, on the other hand, needed an excuse to (support a) vote to acquit. This is an important distinction from a reason to acquit. They needed something, anything, to hang on to. This was post hoc rationalisation at its greatest.

All you needed to do to understand these approaches is to look at Trump lawyer van der Veen’s face and body language when delivering his angsty monologues.

McConnell, and no doubt many other GOP senators, voted to acquit based on constitutionality. This is odd since, and this is what Rep Richard Burr pointed out in why he switched from voting it as unconstitutional to voting to impeach, the Senate voted that it was constitutional and so that issue should have been discarded. The trial was constitutional, end of (whether you still believe otherwise), from a process point of view; therefore, the evidence should be evaluated solely in light of this.

McConnell, though, took a different view, and acquitted solely on the excuse of constitutionality. What was incredible was sitting there, watching his speech after the vote live. I was dumbfounded.

McConnell eviscerated Trump in a way no other Republican lawmaker has done.

It was amazing to watch.

A lot of anti-Trump commentators have decried him for this, accusing him of being spineless. Well, yeas, we knew this. His vote was no surprise. He was trying to have his cake and eat it, naturally. There is no moral backbone to members of the GOP, by and large (though I have been very impressed with Bill Cassidy’s responses). Given that McConnell was always going to acquit, the next best thing happened. He verbally destroyed Trump and laid the groundwork for a 9/11-style inquiry and criminal proceedings.

Trump’s jaw must have dropped to the floor listening to McConnell. He is the single most important member of the GOP outside of Trump in the present dynamics.

I’ll take that. I’ll take that because, despite his vote, he clearly outlined how Trump is completely morally and legally responsible for the insurrection, but that an impeachment trial was not the place to show this.

The turtle briefly came out of his shell.

Seven GOP senators voted to impeach making this the most bipartisan impeachment trial to date.

It’s a small sample – don’t get too excited.

However, this is somewhat pleasing. The problem is that the GOP, all over the country and at different levels, has become overwhelmingly Trumpist. Straight away, Bill Cassidy was censured.

So much for exclusively leftist cancel culture.

As mentioned, Cassidy has come across well. This is a worthy interview:

They will receive an awful lot of pushback. Of course, there were calculated decisions, no doubt, in whether senators would be up for re-election, confounding moral evaluations.

Democrats let them off with witnesses deal?

The shenanigans with whether to allow witnesses or not came and went and many detractors say that the Democrats let the Republicans off here. Maybe. And maybe it was all about getting home for Valentine’s Day, as senators love a good long recess. More realistically, they knew the outcome and were making calculations involving the public and perhaps even McConnell. I immediately thought that McConnell’s speech as part of a deal.

What next? Trials. A ton of trials. New York, Washington, Georgia. Trials.

Cyrus Vance will become a household name, mark my words.

I can’t see Trump ever running again. He will be so embroiled in court cases that he will be toxic. Yes, that core activist base might love him to the end, but he will not garner wide appeal. The sooner the GOP realise the short-termism of Trumpism, the better for them. He is divisive, and divisive simply doesn’t win elections.

I really do think that Trumpism’s heat (and no light) will slowly but consistently die down as the machinations of the party apparatus will come to the consensus realisation that a Trumpian route is not one back to power. In the meantime, though, things will be rocky for all involved in the GOP.

A bit of a sidebar here. With the outcome of the census meaning that Texas will now have 41 Electoral College votes, Texas will become the electoral battleground for the next four years. If the Democrats have any sense, they will be throwing money at grassroots Texas activism in the way they did for Georgia. If Texas goes blue, and it will at some point, the GOP are in serious, serious trouble. All those battleground states become far less important. 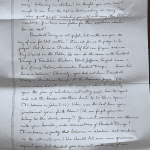