Ding Dong the Witch Is Dead!

So Rush Limbaugh has died. Not sure what to say that is appropriate. During his life, he was a truly horrible and dangerous human being. Or, as my friend said:

“I’m not sad about this at all. He was an awful human being whose pathological lying played a key role in the erosion of productive bipartisan discourse.”

Or as another friend (from a US minority background) said:

“Rush Limbaugbh was an evil human being who lived his life attempting to and succeeding at making life in America worse and more dangerous for minoritized people. He was a prolific, LEGENDARY spreader of hatred and bigotry and many, many, MANY people in the United States and beyond can trace the origins of their bigotry to him.

It’s not sad that he’s gone. It means he can no longer hurt people or downplay the suffering of others. He did forever change talk radio, for the worse.”

One question I could ask myself might be: “Is it right to be happy about the death of someone?”

I was unsure about how to react to his death, so I did my reaction by proxy and through the words of my friends. However, should I have been reticent to show my happiness at bin Laden? Or Sadam Hussein? Let’s bring in Hitler…?

Obviously, some people loved Hitler and bin Laden. I am not comparing Limbaugh directly with Hitler, but I don’t like him at all, and for good reason (some of which is below). He has arguably been the biggest influence on conservative thought amongst the populace in the last fifty years.

And that has been a thoroughly divisive influence. Talk radio in the US is incredibly right-wing, and he has consistently been at the vanguard.

I don’t like Rush Limbaugh. I don’t like him at all. I think he has been dangerous, spreading vast amounts of disinformation and morally repugnant propaganda, and sowing the seeds of hate and division.

In short, I am glad he has died. In the same way I was happy that bin Laden was killed, I show absolutely no remorse in the passing of Limbaugh. Is this right? I’m not sure it’s wrong and it’s certainly how I undoubtedly feel.

One can claim concern for the family and loved ones who cared for him and whom he perhaps cared for himself. I guess I would feel an obligation to do that but no real emotion involved there because I simply despise the man. yes, I can empathize in the abstracta with someone grieving over the loss of someone they love. But I genuinely have to start questioning the moral character of anyone who would love this man.

Some people will feel thoroughly aggrieved at my position here, people who like the man. They might ask ” how would you feel if I showed gladness at the death of someone like Alexandria Ocasio-Cortez?”  I would claim that this is a false equivalence because someone like AOC is  a demonstrably nice human being who strives for inclusivity and to make the lives of all people in her constituency and under her jurisdiction better.

The Rolling Stone reported his death as follows:

And that is what Limbaugh delivered, once again, for Republican America in the wake of the insurrection. It was a final command performance of its kind, especially given the host’s condition. But it’s what Limbaugh had done, while dying, for a whole year. This incredibly wealthy super-patriot used his life’s last energies to do his damnedest to recast a pandemic as a deadly, partisan culture war. To paint a lawless and lunatic president as a wronged and heroic savior of the republic, a symbol of all the myriad wrongs done to Team White America. To call the first woman of color nominated for vice president a “ho” and a “mattress,” to depict racial-justice protests as signs of a coming Armageddon, and to stir up hysteria about a Democratic plot to steal the election. And, ultimately, to lead the cheers and comfort the troops as Republicans turned against democracy itself.

In fact, the article is a fascinating biography of his life and how he got to where he did. It seems Obama brought about that final piece of the jigsaw for him to become he did:

The ascent of a black president gave Limbaugh his bite back. During the campaign, Limbaugh mostly took the old-school route, trotting out racial-stereotype “jokes” (“If Obama weren’t black, he’d be a tour guide in Hawaii”) and “parodies” (“Barack the Magic Negro”). But something snapped in Limbaugh, just as surely as in his listeners, when the black man won. Four days before the inauguration of the popular and historic new president, Limbaugh told his listeners that he’d been asked by The Wall Street Journal to join others in writing 400 words on their hopes for Obama’s next four years. Limbaugh said he only needed four: “I hope he fails.”

For all Limbaugh’s Democrat-demonizing and liberal-bashing over the years, this was something new. This was openly rooting for a president, and thus for the country, to bomb. Right in the middle of a devastating recession and two unwinnable wars. Not, he insisted, because Obama was black. “Doesn’t matter to me what his race is. He’s liberal, is what matters to me.” And it certainly wasn’t “unpatriotic” — just the opposite, in fact. As Limbaugh explained, “rooting for liberalism to fail is rooting for America to succeed.”

Right. The real threat of Obama was far more tribal than ideological, of course — and thus, right up Limbaugh’s alley. Here was a president capable, among other terrifying things, of normalizing non-white rule in America. But stopping Obama was “what I was born to do,” Limbaugh boasted. And thank goodness for that, because, as he reported in the fall of 2009, “In Obama’s America, the white kids now get beat up with the black kids cheering.” Limbaugh turned Obama-hating into a kind of litmus test for white pride — a way to show that you won’t be played by the liberals and their white-guilt trips. “If any race of people should not have guilt about slavery, it’s Caucasians,” he declared. “And yet white guilt is still one of the dominating factors in American politics. It’s exploited, it’s played upon, it is promoted, it is used, and it’s unnecessary.”

Limbaugh spun conspiracy theories that grew wilder, more menacing, more elaborate, and more violent (“Race riots are part of the plan that this regime has”). Obama was transformed into a symbol of the bleak future that white Americans might expect if they didn’t recognize the existential peril and rise to fight it. “We live in two universes,” Limbaugh was now telling his listeners. “One universe is a lie. One universe is an entire lie. Everything run, dominated, and controlled by the left here and around the world is a lie. The other universe is where we are, and that’s where reality reigns supreme and we deal with it.”

Fortunately, with Democratic fascism looming so close, white America still had one last thing going for it, one last flicker of hope. Limbaugh is routinely credited with “paving the way for a President Trump,” the same way he’s characterized as “helping move the Republican Party to the right.” But it went much deeper than that, on both counts. Limbaugh served as a sort of original model for Trump — the comic-blowhard authoritarian who provides endless entertainment, infallible-though-incredible wisdom, and marching orders for the tribe. And by 2015, he’d helped nudge and bully the party not toward some kind of hardcore conservatism, but in a radically nihilistic direction.

So on and so forth – most of you are probably all too aware of who he is and what damage he has done to bipartisan discourse.

A selection of the sort of thing he has said is as follows:

All of which leads me back to the idea that I feel the world is a better place without this man spreading his lies and hate. If that annoys you and makes you think less of me, you’re probably not the sort of person whose moral evaluations I care for at any rate.

February 19, 2021 Paine and Hume Regarding the Resurrection
Recent Comments
0 | Leave a Comment
"'State' has many meanings, one of which is similar to the meaning of 'nation', which ..."
Geralt_0f_Rivia Darwin Day:
"My reply is waiting to be approved, possibly because it has so many bible verses ..."
Greg G. The Trial of Jesus
"The evidence that the Bible is full of falsehoods is there because people who have ..."
Greg G. The Trial of Jesus
"If you haven't read Marx, you have no business criticising Marx. It's as simple as ..."
90Lew90 Darwin Day:
Browse Our Archives
get the latest from
A Tippling Philosopher
Sign up for our newsletter
POPULAR AT PATHEOS Nonreligious
1 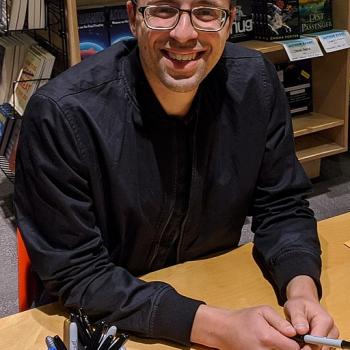 Nonreligious
Biden is Better, but…
A Tippling Philosopher
TRENDING AT PATHEOS Nonreligious