Biden is Better, but…

Twelve years ago when Barack Obama was the incoming President, he declared, “We are a nation of Christians, and Muslims, Jews and Hindus—and nonbelievers.” It was the first time any President had used his inaugural address to affirm that secular people were a welcome part of the nation. Since then, the secular part of our nation has grown substantially, especially the younger generations.

President Biden made no such declaration in his inaugural address. In fact, he did quite the opposite. He made repeated references to religion, particularly his own Catholic faith. A letter that I just received from The Center for Inquiry (CFI) gives a few discouraging statistics on his speech:

He even asked listeners to join him in a moment of silent prayer…and closed it with a heartfelt “amen.”

The only people who close prayers with “amen” are Christians, Jews and Muslims. What about all the rest of the people? The Hindus and Buddhist, the Satanists and secularists? They don’t seem to be as included or welcomed as they were by Obama.

“It is unfortunate that these messages of unity do not acknowledge nonreligious Americans. So many calls for prayer—and the presumption of religious belief—exclude us. There’s a distinction between expressions of personal faith and the weaponization of faith. We can presume the best of intentions from the new White House. But the best way to deal with religious faith at government ceremonies is to leave it out.”

In a way, Biden’s pandering to the religionists is understandable. He is taking a lot of heat for his pro-choice stance. Evangelicals have slammed him, and some Catholics are even calling for him to be excommunicated.  Still, I found it disheartening to hear all this religious inanity from our new leader.

So far, Biden’s actions as President are reassuring. Only one of his Executive Actions concerns me. It establishes a White House Office of Faith-Based and Neighborhood Partnerships to “coordinate providing community services in partnership with federal, state and local governments and with other private organizations.”

This sounds suspiciously like the funding of “faith based” charities that G.W. Bush established. Too often, such organizations end up proselytizing captive audiences of needy people at taxpayer expense. This is a bunch of worms in our government that should have been exterminated long ago.

Note: The words “under God” were added to the Pledge of Allegiance in 1954 when I was a Senior in high school. In our daily recitation of the Pledge, I refused to say those words. It was a silent protest, but even then, I knew those words had no place in a reference to our secular government. 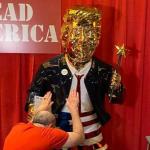 March 1, 2021 Christians Worship A False Idol
Recent Comments
0 | Leave a Comment
Browse Our Archives
get the latest from
A Tippling Philosopher
Sign up for our newsletter
POPULAR AT PATHEOS Nonreligious
1