I’m just finishing a book that I have previously declared as one of the most important books I have ever read, even though at the time I had not finished it! I still very much believe this. The book is Harari’s 21 Lessons for the 21st Century [UK] and it is that glorious intersection of philosophy with pragmatic reality such that it is a good example of applied philosophy. I love the scope of Harari’s writing as it winds its way from philosophy through politics to technology and futurism via religion and morality, and so on.

Today, I want to quote you a section of the book that talks about Islamic terrorism and martyrdom in the context of some suicide attacks in France from a few years ago.

Indeed, even suicide doesn’t prove an absolute commitment to a single story. On 13 November 2015, the Islamic State orchestrated several suicide attacks in Paris that killed 130 people. The extremist group explained that it did so in revenge for the bombing of Islamic State activists in Syria and Iraq by the French air force, and in the hope that France would be deterred from carrying out such bombardments in the future.18 In the same breath, the Islamic State also declared that all the Muslims killed by the French air force were martyrs, who now enjoy eternal bliss in heaven.

Something here doesn’t make sense. If indeed the martyrs killed by the French air force are now in heaven, why should anyone seek revenge for it? Revenge for what, exactly? For sending people to heaven? If you just heard that your beloved brother won a million dollars in the lottery, would you start blowing up lottery stalls in revenge? So why go rampaging in Paris just because the French air force gave a few of your brothers a one-way ticket to paradise? It would be even worse if you indeed managed to deter the French from carrying out further bombings in Syria. For in that case, fewer Muslims would get to heaven.

We might be tempted to conclude that Islamic State activists don’t really believe that martyrs go to heaven. That’s why they are angry when they are bombed and killed. But if so, why do some of them strap on explosive belts and willingly blow themselves to smithereens? In all likelihood, the answer is that they hold on to two contradictory stories, without thinking too much about the inconsistencies. As noted earlier, some neurons are just not on speaking terms with one another.

Eight centuries before the French air force bombed Islamic State strongholds in Syria and Iraq, another French army invaded the Middle East, in what is known to posterity as ‘the Seventh Crusade’. Led by the saintly King Louis IX, the crusaders hoped to conquer the Nile Valley and turn Egypt into a Christian bulwark. However, they were defeated at the Battle of Mansoura and most of the crusaders were taken captive. A crusader knight, Jean de Joinville, later wrote in his memoirs that when the battle was lost and they decided to surrender, one of his men said that ‘I cannot agree with this decision. What I advise is that we should all let ourselves be slain, for thus we shall go to paradise.’ Joinville comments dryly that ‘none of us heeded his advice’.19

Joinville does not explain why they refused. After all, these were men who left their comfortable chateaux in France for a long and perilous adventure in the Middle East largely because they believed the promise of eternal salvation. Why, then, when they were but a moment away from the everlasting bliss of paradise, did they prefer Muslim captivity instead? Apparently, though the crusaders fervently believed in salvation and paradise, at the moment of truth they opted to hedge their bets.

This is a bit of a two-horned dilemma that runs surprisingly close to Stephen Maitzen’s argument that theistic morality leads inexorably to moral paralysis (See “Ordinary Morality Presupposes Atheism, not God!“). If the terrorists truly believe in their claims of martyrdom, then they should celebrate what the French did. Rather than seeking revenge, they should celebrate the French actions. They should not stop the French from bombing their fellow Muslims because this would stop those people from accessing the paradise of martyrdom.

On the other hand, if they don’t believe in the claims that the people who died in the French government bombings were martyrs, then these deaths appear to be gratuitous and God isn’t omnibenevolent.

This is something of a problem. 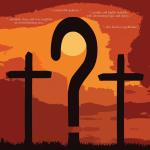 Nonreligious
Teacher suspended over depiction of Muhammad in Batley...
A Tippling Philosopher