The Left and Their Cancel Culture!

The Left and Their Cancel Culture! July 14, 2021 Jonathan MS Pearce

Goddamned lefties and their cancel culture, as the Boston Globe reports:

As the debate over the teaching of critical race theory in the classroom intensifies across the country, the firing of a Tennessee teacher last month emerged as a flashpoint in the discussion over the weekend.

Matthew Hawn, who had been a tenured teacher at the Sullivan County School District since 2008 and baseball coach at Central High School, was dismissed by the local board of education on June 8 in a 6-1 vote for two separate incidents where he taught about race, reported WJHL.com, a news outlet based in Johnson City, Tenn.

At issue was Hawn assigning the essay “The First White President” by Ta-Nehisi Coates to students in his Contemporary Issues class in February, and later in March, playing a video of “White Privilege,” a spoken word poem by Kyla Jenée Lacey to the same students….

“This really seems extreme and a harbinger of what is to come,” wrote Donald Moynihan, the inaugural McCourt Chair at the McCourt School of Public Policy at Georgetown University.

“As local school board elections become dominated by people driven by or responding to a moral panic, expect more teachers to be fired for engaging in any sort of critical speech,” Moynihan wrote. “What a disservice to their students.”

Hawn’s firing was precipitated by a parent who complained to the district that the essay conveyed a “somewhat angry, and hateful opinion towards President Trump” and contained words he believed should not be “introduced to our children by a high school teacher,” according to documents provided to WJHL.com.

According to the documents, Hawn said he was comfortable assigning the essay because “those were the words of the President and I thought the kids were mature enough to handle it.”

When asked what other reading materials he could have assigned to offer a differing viewpoint, Hawn replied: “There is no credible source for a differing point of view.”

Hawn was informed in May by David A. Cox, the director of schools, that the board would be moving forward with the charges of dismissal against him during the public meeting in June, and until then, he would remain on suspension without pay, according to the documents.

Cox wrote in a document outlining the charges of dismissal that Hawn should be let go as a tenured teacher with the district “based upon his insubordination and his repeated unprofessional conduct.”

He alleged that Hawn exhibited unprofessional conduct by demonstrating “questionable judgment” in assigning Coates’ essay “containing inappropriate terms” and for “unreasonably denying” students in his class “access to varying points of view in violation of the Teacher Code of Ethics.”

“Your job is not to teach one perspective. Your job is also not to ensure students simply adopt your own personal perspective,” the letter of reprimand to Hawn read. Hawn appealed the letter, but the board of education unanimously voted to uphold it. A month later, he showed his students the video, which the school deemed inappropriate for some of the language used….

Both in the letter of reprimand and in the charges of dismissal, school officials took issue with Hawn apparently not teaching a “conservative perspective,” and where Coates’ essay was concerned, not providing an opposing point of view to Trump having ascended to power in large part because of his standing as a white man.

“As noted with the prior letter of reprimand, Hawn remained more than welcome to offer and discuss appropriate materials with Contemporary Issues students which provided a more liberal perspective, assuming he would know that would also require offering and discussing appropriate materials which provided a more conservative perspective on the same subject matter,” Cox wrote.

He added: “This crucial — and ethical — standard was lost on Hawn in early 2021, and it appears that it is still lost on him now.”

Dozens of supporters showed up at the meeting last month to express their support for Hawn, and former students told News Channel 11 that “latent racism was ever-present” at Sullivan Central High School. One graduate who had previously taken Hawn’s class on contemporary issues told the outlet that “we talked about white privilege, and he was very open and fair and balanced on both sides of the argument.”

July 15, 2021 Matthew's Bloopers
Recent Comments
0 | Leave a Comment
"Might change it from "Collected Essays on the Philosophy of Religion" to "How to Rationally ..."
Jonathan MS Pearce Why I Am Atheist and Not ..."
"I think Jonathan could prove his "ontic existence" by banning you from this site. You ..."
Rick O'Shea Why I Am Atheist and Not ..."
"It was obvious. Lord Dude probably knows it too. I am sure he just likes ..."
Rick O'Shea Ontology, Essentialism, Faulty Foundations and, Well, ..."
"Suffering requires an idea of yourself extended into the future, and that is quite sophisticated. ..."
Phil Rimmer Humanists Urge Supreme Court to Protect ..."
Browse Our Archives
get the latest updates from
A Tippling Philosopher
and the Patheos
Nonreligious
Channel
POPULAR AT PATHEOS Nonreligious
1 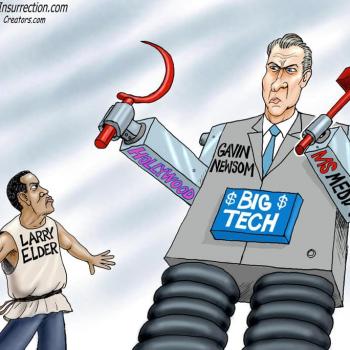