And the blame game starts.

But let’s look at what led up to this.

1) We (the US and its lackeys, the UK) went in there, arguably for very dubious reasons, using bad intelligence.

2) We were in for a long time, trying to fix something very broken, without much chance of succeeding.

3) We did a lot of good, making changes that often take decades to properly embed and make work.

4) We can’t police the world, certainly indefinitely (though there is the issue of going in there in the first place, so surely we should finish the job we started – but how long do you give it?).

5) It was costing money and lives (but how big a cost, since those troops would still be being housed somewhere – be careful as to how some people calculate such costs).

6) Trump wanted us out on May 1st – Biden extended. If you are going to criticise Biden, criticise Trump even more. Trump made it a central pledge and now many of the defenders of this pledge are criticising Biden for fulfilling it. There is a huge amount of hypocrisy and political capital being exploited here.

7) Intelligence, again. Are the US intelligence gatherers good enough? How we went in and how we left appears to have been based on very bad intelligence. “The Taliban won’t threaten Kabul for a month”. Oh, less than a week later…

Here is an excellent video well worth watching:

Now FOX News idiots and other right-wingers are sounding the immigration klaxons.

My view is this. There are no right or wrong answers here. There is no clear best decision because it depends what the metrics of evaluating the decisions and their consequences would be. Should we have pulled out when we did? Well, hindsight is always 20-20. Decisions were made based on the available information and intelligence. There should be serious questions about this. Did we put enough thought into this eventuality? No. There appears to have been nothing in place. The whole crux of the issue here seems to be the speed with which the government collapsed and the Taliban took hold.

So I really do think it all comes down to the quality of the intelligence and the strategic planning based off of it.

I know it’s easy to say that the buck stops with Biden and in many senses it does. But he’s no Afghanistan or military expert. He is working on advice from a whole bunch of experts. And if there is fragility in the foundations of his decisions, then his decisions might appear to be very bad.

It’s rather like Blair going into Iraq. If he really thought there were weapons of mass destruction there, then his decision is somewhat more justified. But that belief is based on intelligence, and if that intelligence is poor or faulty, then the decision looks terrible.

I’m not excusing Biden, though this decision has been long in the making and is firmly and openly rooted in the previous administration (such that Biden even delayed it). What I am saying is that these things are nuanced. I certainly think far more contingency plans should have been constructed, but as for what we should be doing with Afghanistan in the bigger picture, going forward from now or continuing as we were, I just don’t know what the answers are.

As with everything moral, it comes down to goals – goal-oriented morality. What do you want the world to look like? The whole world? What’s the best way of getting there?

The other problem is Afghanistan itself. It is at the bottom of every meaningful league table, albeit with some good improvements under the Western policing. However, it is not an economically sustainable country. Sadly, how you “sort countries out” is through economics and money – education, standards of life, healthcare, focussing on women etc. – all take money, and this needs to eventually come from within the target country in a way that the country becomes self-sufficient.

The issue with this graveyard of empires (that is, Afghanistan) is that it has nothing other than, just about, opium and heroin manufacture as natural resources. There is no economic strategy that can allow Afghanistan to lift itself up by its bootstraps. Without economic sustainability, the country is doomed to the vagaries of nefarious forces and ideologies that find such infertile land thoroughly fertile. Poverty and a lack of security breed religious fervour as the only vehicle for hope for desperate people.

The government forces understandably scarpered at the first sign of potential death. They are fighting for a meagre paycheck. The forces against which they are fighting are doing so for eternity in heaven with 72 virgins as religious and political martyrs. This is not an existential level playing field.

So I really don’t see a way out of this political, religious, societal, existential quagmire.

August 25, 2021
Check out the First in the MythVision Interview Series
Next Post 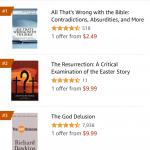 August 26, 2021 Take that Dawkins!
Recent Comments
0 | Leave a Comment
"The best counter-example here is the Galileo's Ship thought experiment."
epeeist Real Deconversion
"“ ..i had a huge impact on that explosion about 30 years ago..”Like other commenters ..."
Geoff Benson Real Deconversion
"He seems a bit keen on young men wrestling."
Philip Buczko Outright Misogyny: The Worst Speech in ..."
"Once again, the “bubble” is evident as the believer is constantly warned of the danger ..."
Jim E Jones Beyond an Absence of Faith
Browse Our Archives
get the latest updates from
A Tippling Philosopher
and the Patheos
Nonreligious
Channel
POPULAR AT PATHEOS Nonreligious
1