Skydivephil (Phil Halper) has produced some amazing videos over the years, and this is no exception. It’s a real privilege to be able to see two of the biggest hitters in cosmology in conversation together. It’s a discussion between the father of inflationary cosmology, Alan Guth and 2020 Nobel Prize Winner in Physics Sir Roger Penrose. The debate is mostly cosmological but what should be of interest to the atheist community is that both quite clearly state that they don’t think the constants of nature are fine-tuned for life and both almost laugh at theologian William Lane Craig’s suggestion that infinity should be ruled out for the cosmos; they both agree the universe could be past eternal.

As Craig quotes both of these scientists to back up his views, I think it’s extremely interesting to see that not only do they not agree with him, but they don’t even think his ideas should be taken seriously. The relevant sections can be found here to those last few points: fine-tuning, multiverse: 59 mins infinity – 1 hour 24 mins. Also, about 11 mins – 12 mins.

Phil Halper does a great job of mediating the conversation. Good stuff. 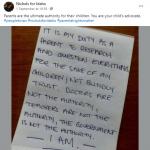 September 3, 2021
Texas: "The Pro-Life Movement Is Winning"
Next Post

John King's Admission on CNN
This meant a lot to me, not just because I really like...
view all Nonreligious blogs
What Are Your Thoughts?leave a comment
Copyright 2008-2021, Patheos. All rights reserved.