I recently wrote an important piece explaining the foundations to my entire worldview. Go read it. I’ll remind you of the impressive infographics I got my design department to put together: 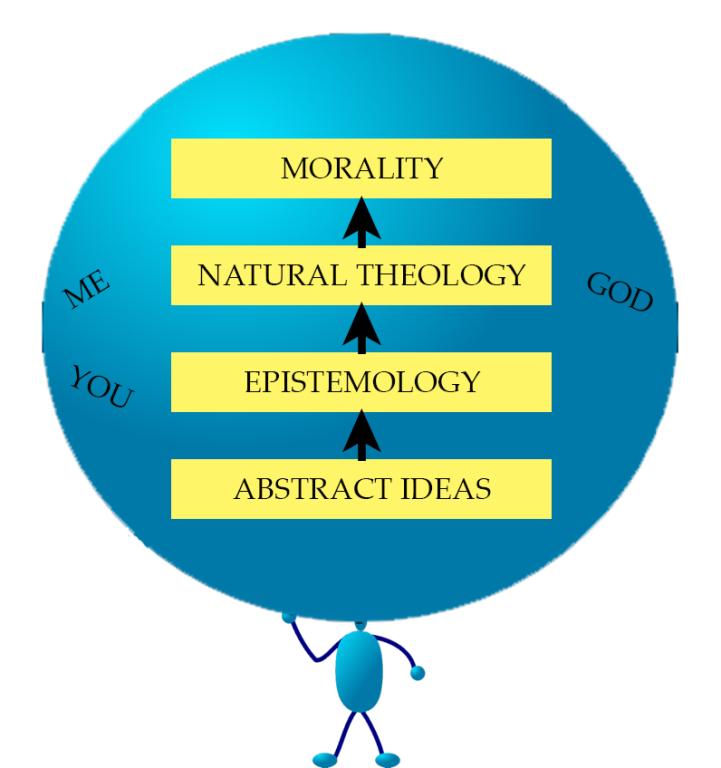 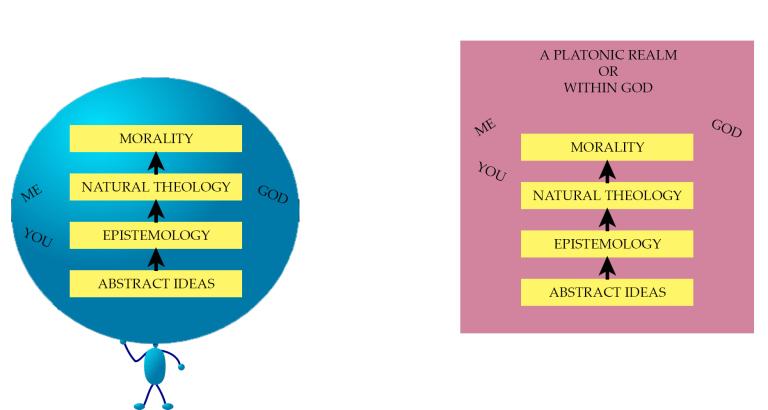 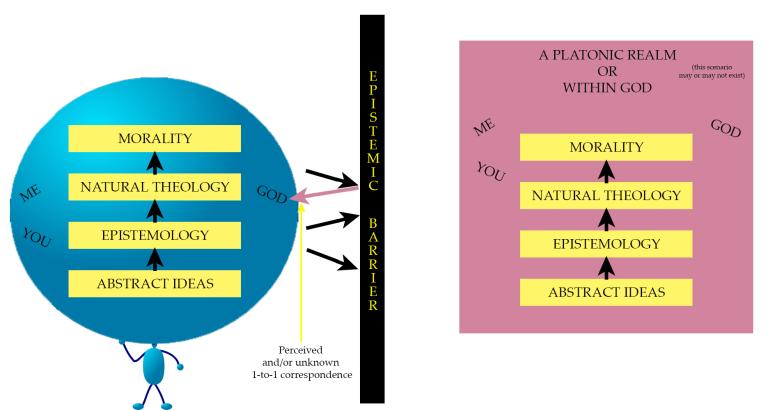 The last one illustrates how, when being moral or thinking something about the character or attributes of God, it is impossible to know whether your beliefs have a 1-to-1 correspondence or close resemblance to the source (God or some Platonic realm). I was expecting a reply similar to that which Luke Breuer provided on the last piece:

Where are the biggest gains to be had, in ordering one’s abstracta and epistemology and such in the way you think it should all be done? I’m guessing you are doing a little bit more than just asserting fallibilism?

This is a great comment. So let me expand.

It’s ALL about epistemology.

When my idea of morality is different to Luke’s, I can know this almost definitely because we communicate, and our communication is validated and verified by others, and by our own data and analyses. I say X, Luke says Y. We disagree. There is effectively no barrier (past the Descartes’ Evil Daemon or The Matrix scenario) because I can simply reply to him or email him. Or, heck, even go and see him or Zoom call him if we so desired. I can get first-hand confirmation, and also confirmation of everyone else on Earth if they have access to the internet.

So what’s the difference between this scenario and interacting with God.

Well, all the usual ones. If God is revealed in a 2000-year-old book, then we don’t have epistemic warrant for believing it. I have set this out in several books and my next one (Why I Am Atheist and Not a Theist). And one religion and its claims has to compete with all others, and offer a resounding epistemic win in order to be thoroughly warranted.

I don’t think any religion even comes close.

What other revelations are there, where revelation means some kind of interaction with the source material?

Well, there are artefacts, like a holy book. Perhaps books, perhaps a stele here or an inscription there.

Still, nothing on Earth that has come up with the goods. And even if, say, an ancient inscription did, or an ancient holy book did really come from a particular divine truth, we still can’t really know that. Such claims are still not believable in the present world as we know it.

Essentially, personal witness, experience of revelation from any source is highly problematic:

I could go on and on about epistemology here – it’ll all be detailed in my book. The fact that there are 42,000 different denominations is evidence that the Christian God hasn’t clearly communicated or interacted with humanity. We have 42,000 denominations of Christians, each with their own personal interpretations of God and God’s desires and commands (and that’s not to mention the myriad other religions and their multitudinous denominations and sects, and all of their individual interpreters), all claiming that they have it right, that their beliefs have the closest correspondence.

Of course, to do this, you need to…

There are all the obvious epistemological problems with this, some detailed earlier and in the previous article. I just don’t know how you can know, with any level of certitude, that you are aligning, short of God coming down and verifying this in person and in a way that you were confident actually happened.

But on a day-to-day basis, you are still using ordinary morality, morality that doesn’t require God or gods. You are hopefully knowing that rape is bad. Not from divine revelation – after all, rape is countenanced often in the Old Testament. As is slavery and many other moral ills. “But God wouldn’t countenance rape – those Bible verses are poorly interpreted!”

But how would you know this without already knowing, through moral reasoning, that rape or slavery is bad, and that God wouldn’t countenance them?

No, morality is based on reasoning, and the abstracts and reasoning exist in because they are constructed by our subjective minds.

Now the second part to Luke’s comment is also very interesting. But that can wait till tomorrow – it deserves a post of its own.

Please support by sharing or donating, or both! Thanks for all of the help you give me – it’s absolutely crucial. You can buy me a cuppa. Or buy some of my awesome ATP merchandise! Please… It justifies my continuing to do this!

September 10, 2021
The Sad Reality of (Right-Wing) Disinformation
Next Post

Nonreligious
On Refusing Epistemic Interaction: Dealing with People Who...
A Tippling Philosopher
TRENDING AT PATHEOS Nonreligious