Why I Am Atheist – Out Now!

My latest book is now through the distribution channels – whoop! Here it is on my counter, so it must be true! Why I Am Atheist and Not a Theist: How To Do Knowledge, Meaning, and Morality in a Godless World [UK]. 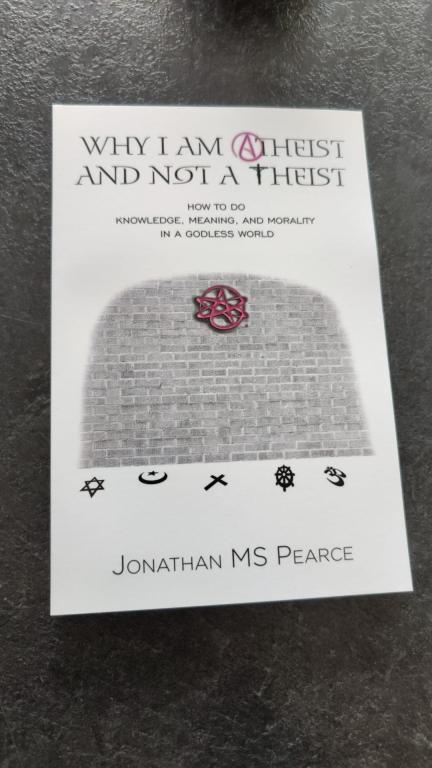 Anywho, here is the description:

While Jonathan MS Pearce has written a whole suite of books that have produced a barrage against theism, in this book, he pulls a number of threads together that build up a case for his own entire worldview. This book is not just about why atheism is a more rational position than its counterparts, but it also builds the foundations for a sound epistemology (theories about knowledge and truth) and morality from the bottom up. Pearce’s account for reality has far-reaching consequences that cover many bases, from God to guns, personhood and abortion to racism, and why he thinks his positions on these subjects are rational.

In Why I am Atheist and Not a Theist, Pearce tackles all of reality in an accessible manner, presenting a cogent case for why he concludes as he does, and why you should too.

“Pearce’s clear writing and charming wit allow even those unfamiliar with philosophy to enjoy this deep dive into a non-theistic worldview. He lays out a humanistic, naturalistic philosophy that is not only epistemologically sound and logically coherent, but enjoyable to read. This book serves as a wonderful introduction to the philosophy of irreligion, where one’s ideology is not just defined by an absence of beliefs, but instead by the presence of better beliefs.”

– Dr Caleb Lack, author of Critical Thinking, Science, and Pseudoscience: Why We Can’t Trust Our Brains

“This collection of essays is the best introduction to the debate between atheists and theists in the market today. With both gentle humor and admirable rigor, Pearce makes technical philosophical terminology clearly understandable to the uninitiated reader, and then persuasively lays out a very convincing case for his clearly defined concept of naturalism. A must for anyone just starting to engage with the philosophy of religion!”

“Pearce has written an engrossing treatment of some of the most compelling questions of human existence. This book skillfully builds a worldview that is based on scientific naturalism in a way that is highly accessible to the non-philosopher. Virtually every page will make you think.”

Further details on the ideas in the book can be found here. Please help out the cause, and obviously for you own intellectual edification, and grab a copy! The ebook will be released in a month or so.

October 13, 2021 Protectors or Infectors?
Recent Comments
0 | Leave a Comment
Browse Our Archives
get the latest updates from
A Tippling Philosopher
and the Patheos
Nonreligious
Channel
POPULAR AT PATHEOS Nonreligious
1

Nonreligious
WWRD - What Would Republicans Do?
A Tippling Philosopher
TRENDING AT PATHEOS Nonreligious