Vouchers Are Not Free Exercise

School vouchers allow parents to choose the school their children attend…including schools that explicitly “teach” religion.  I put “teach” in quotes, because religious belief is not an academic subject. Teaching religious belief is really indoctrination and reinforcement of faith-based ideas. So why is it taught in schools? Shouldn’t it be taught at home or at church services? Government has an interest in educating students, but not in indoctrinating them with religious belief. It is a subject that should not be offered in schools that are funded by the government. If some people want their kids to get religious classes in school, let them establish, and pay for, their own schools, but those schools must meet all the academic standards of the public school system.

This seems to me to be the crux of the voucher controversy. Most people accept the principle of the Establishment Clause…that government should not show favoritism toward any religion, or to religion in general over nonbelief. Nobody that I know of openly advocates government payments to churches. But voucher advocates want government payment for religious education in schools.

Politicians violate the Establishment Clause often…how about “Prayer Breakfasts” by political leaders? Sure, it’s just expression of their personal faith, but political leaders cannot completely divorce themselves from their official position of authority. Sadly, most of our politicians often pander to Christianity, whether they are believers or not…and that leads to things like school vouchers, a subsidy to religious education. Tax exemptions for churches are an even larger subsidy. Most church activities are not charitable programs, so they cannot claim that as justification for the subsidy. Instead they invoke the Free Exercise Clause. The word “exercise” is vastly misused by religious advocates. Everyone should be…and is…free to practice any faith they like…or no faith. Does “exercise” mean that they can collect tax-deductible donations from their members to build churches and operate those churches without paying taxes like any other property owner? Does free exercise mean a free ride, paid for by everyone who is not a church member? Is this what the Constitution means by Free Exercise?

There is an ancient maxim: “A tax exemption is a tax on everybody who does not get the exemption.” Government needs a certain amount of money to operate. Tax exemptions shift that financial burden. A smaller base of taxpayers means those taxpayers will each have to pay more to meet the government’s needs. Remove the exemption, and tax rates can go down.

Back to vouchers.  The attempt to use my taxes to fund religious indoctrination by conflating it with academic curricula is outrageous. It violates the Establishment Clause and has nothing to do with Free Exercise of religion. Take religion out of publicly-funded school curricula, and vouchers are okay.

October 17, 2021 Analysing the Basis for Heaven and Hell
Recent Comments
0 | Leave a Comment
"HA HA HA!! We all deal with that @!!*&%!!&**/?!!@#!! auto-correct."
Rick O'Shea Christmas Is Almost Here, and…
"https://uploads.disquscdn.c..."
Boreal Christmas Is Almost Here, and…
"A story about what happened to a friend of a friend last year whose window ..."
BlueSurgeon The Swoon Theory: Did Jesus Really ..."
"Smallbore's ability to ingore reality is quite breathtaking."
democommiescrazierbrother Comment Scorecard
Browse Our Archives
get the latest updates from
A Tippling Philosopher
and the Patheos
Nonreligious
Channel
POPULAR AT PATHEOS Nonreligious
1 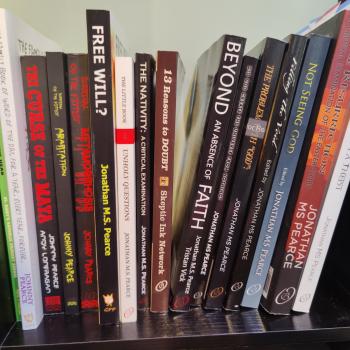