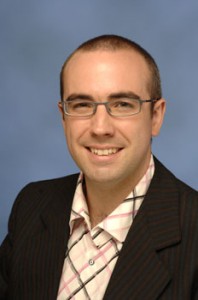 I’m in the final stages of writing the book of the Token Skeptic podcast – so here’s an interview from the archives that you might enjoy. I interviewed Julian Morrow of the Chaser, who featured at the Saturday night dinner at the Global Atheist convention in 2010. Don’t forget that the tickets for the dinner (and the event itself) for the Global Atheist Convention in 2012 are selling fast, so if you want to be a part, do head to the site.

The Chaser is an Australian satirical comedian group, most famous for their television programmes on Australian Broadcasting Corporation. The Chaser originated as a satirical newspaper which was known to push the limits as to what it published and for enacting its mission statement, “striving for mediocrity in a world of excellence”.

Kylie: So how difficult is it to make fun of religion?

Julian: It’s not that hard. It’s almost as hard as making fun of atheism.

Kylie: And you managed to do that quite well, by posting up a large poster which made a lot of fun of the atheist bus banners that have been going around?

Julian: Yeah, that’s right. It was fun to play that at the [2010 Global Atheist] convention because it was actually a piece of footage that we’d made for The Chaser’s War on Everything Series Three but didn’t broadcast. And it followed from the atheist bus-ad thing that started in London, and we happened to be in London around the time because we were shooting for the War on Everything, and we basically made our own little sign, entreating the London commuters to bow down to the dark lord Satan. Just to try and even out the debate between atheism and religious people, we thought that Satan needed to get a bit of a look-in!

It was actually a really fun stunt to do, although it didn’t quite work just as a package for our general audience. And it was kind of sitting there on the shelf, and we figured if it didn’t get a laugh when we played it at the Atheist Convention, it was never going to get one, and we were pretty glad that it did. It went down pretty well, actually.

Kylie: It went down wonderfully well at the convention! Now, to set the scene a little for people who aren’t familiar with your work, there’s an article that was originally printed in the Sydney Morning Herald, and it’s featured on the Richard Dawkins website. The one about the “crack annoyance squad” for what was then the 2008 Catholic World Youth Day. There you describe yourself as “A lapsed Catholic, a lapsed lawyer, a lapsed Chaser comedian, and a practicing criminal”… So do you also describe yourself as a skeptic?

Julian: Look, I’d say so. I mean, yeah. Look, I’m a great believer in rationalism. I’m not a very scientific person. And basically, elementary concepts that most intelligent people should understand in the science world completely bemuse me, but I do believe that there are always rational explanations for things. I suppose the only thing I would say is that I do think that excessive rationality is as much a flaw as excessive spiritualism or occultism. So I think that there’s a balance to be struck in all these things.

Kylie: I guess that’s where having a laugh at oneself comes into it as well…

Julian: Well, it comes naturally to us!  Being a comedian, in one sense, the kind of low-brow, cheap-shot comedians that we are, is it’s essentially a negative pursuit. It’s about knocking down, well, hopefully those people in positions of authority, but sometimes just innocent victims as well. We can’t pretend otherwise at the Chaser. And so I suppose, to some extent, that’s similar to skepticism in terms of trying to pierce the, well, falsehoods and pretensions, claims that are more extravagant than they can possibly, realistically be. But I suppose that’s not the end of the game, either. There is a place for the more positive side of things. It’s just that at the Chaser, we’re chronically incapable of it, so we don’t attempt it.

Kylie: Do you think that there’s a rising number of comedians entertainers who use pro-atheist and pro-skeptic material in their acts, or are we just noticing them more?

Julian: Look, I think there’s always been that kind of strain in comedy, because comedy’s essentially pretty cynical, and so I suppose there’s a natural kind of commonality between those two things. We’re probably noticing it a little bit more. But in the end, I think there’s good comedy and bad comedy. I think the beliefs that you have behind it don’t really matter that much. You’ve got to make your audience laugh, and that’s true if it’s a religious audience or an atheist one.

Kylie: A favorite Chaser sketch of mine is when the members of the team dress up as the Ghostbusters and confront John Edward with a bullshit meter – how did that come about? How did you get away with that?

Julian: That was funny, actually, because we knew that John Edward was in town, and we knew that he was doing an interview on the Today show, so we’d actually sent our researchers up to kind of stake out the Channel 9 studios at Willoughby and then to follow John Edward’s car when he came off air. They did that, but unfortunately we weren’t able to get all the props and stuff together. Our art department did an amazing job that day, because we briefed them at about eight o’clock that we wanted to dress up as Ghostbusters.

And they made–what do they call those power packs that the Ghostbusters had?

Julian: Yeah. Well, our versions were like a kind of Playskool mock-up made out of items of office stationery at about 10 minutes’ notice. But they did a great job. Unfortunately, however, we missed Edward before he got back to his hotel in the city. So we kind of staked out the hotel for a while.

And eventually, we were kind of envisioning, oh, we’re going to have to follow this guy to the Entertainment Centre or whatever and try and get past his event security. Eventually, he wandered out the front door and was walking along Circular Quay, as it turned out, in his very mainstream American ways, to go down to McDonald’s, to try the local McDonald’s cuisine. Obviously, he was in Australia, so he wanted to have a McOz, to see what our culture was like!

So we all ran after him and were hiding round the corner, waiting for him to come out of McDonald’s. And it was really funny, actually, because we were hiding in this place, and mysteriously he just started walking straight towards us.

We were completely freaked out. All our skepticism evaporated. We’re like, “He knows we’re here. This is amazing. Why is he walking here? This guy’s incredible!!” We were about to buy tickets to his show. And then, of course, he walked straight past us, having no idea that we were there, and then we hijacked him.

We kind of felt a bit sorry for him, actually, because we heard later on from his publicist that doing all that bollocks that he does about pretending to talk to dead people, he actually attracts quite a lot of nutters. And so, when we ran up to him and started behaving in a bizarre manner, I think he was slightly afraid that we might make him “cross over,” so to speak. So when he found out that we were just mean, rationalist comedians, I think he was a bit relieved …

Listen to the interview at Token Skeptic.org.

February 7, 2012 The Downfall of Australian Music
Recent Comments
0 | Leave a Comment
Browse Our Archives
get the latest from
Token Skeptic
Sign up for our newsletter
POPULAR AT PATHEOS Nonreligious
1