Not exactly what I’d associate the singer with, but as I’ve investigated nomenclature and odd links to pop culture figures before… I guess I shouldn’t be too surprised.

At one stage of its life, the new genus Gaga has somewhat fluid definitions of gender and bears a striking resemblance to one of Gaga’s famous costumes. Members of the new genus also bear a distinct DNA sequence spelling GAGA.

…Pryer freely admits that she and her lab are big Gaga fans. “We often listen to her music while we do our research. We think that her second album, ‘Born this Way,’ is enormously empowering, especially for disenfranchised people and communities like LGBT, ethnic groups, women — and scientists who study odd ferns!” Pryer said.

“What a remarkable, unexpected, perfect tribute to name a genus of ferns for Lady Gaga,” said Duke faculty member Cathy N. Davidson, who was involved in the MacArthur Foundation’s Digital Media and Learning Initiative that helped Lady Gaga to create the Born This Way Foundation, a national anti-bullying initiative.

October 24, 2012
Melbourne! Over 50 Years Of Age? Documentary "Jabbed" Needs Your Story!
Next Post 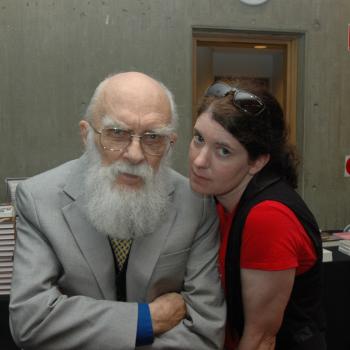 Chapter 6: Above and Beyond the Call of...
David awakens from his coma, and the army goes above and beyond...
view all Nonreligious blogs
What Are Your Thoughts?leave a comment
Copyright 2008-2020, Patheos. All rights reserved.