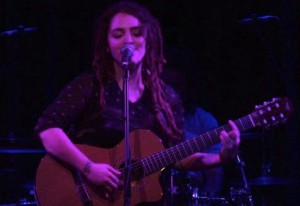 Welcome to Hour Seven of the Token Skeptic Sunday Sessions!

This is an interview with Australian musician, Shelley Segal.

Shelley Segal was brought up in a musical family, singing from the age of three and performing with her father’s wedding band from age eleven. She’s been performing her original music live for ten years and recording for four years and even moved to the UK for a production deal and recorded two albums there. Her first is An Atheist Album, which is a reflection on her world-view as an atheist, on religion and related themes, and on the first of March, you can get her latest release Little March – a jazzy/bluesy collaboration with US guitarist singer song writer Adam Levy.

Shelley has written and recorded pop, folk, jazz, blues, country, electronic, reggae and rock songs and has toured the US and now Australia, including the Global Atheist Convention in 2012 and the Reason Rally in Washington DC. You can catch her on her current  tour by checking out the dates via visiting her site at www.shelleysegal.com.

Shelley Segal performing is live at Embiggen Books in Melbourne on May 30th! Free! RSVP now. Ph:9662 2062 or head to: http://www.embiggenbooks.com/blogs/embiggen-books/7786433-shelley-segal-performs-live-at-embiggen.

Kylie Sturgess: What’s it been like over the past year or so? You’ve done the Global Atheists Convention. I saw you on the stage on Reason Rally, and we were all doing a big cheer over here in Australia, while watching you on YouTube. What’s the journey been like?

Shelley Segal: It’s been unbelievable. I’ve been seven times to the US now in the last, and twice to the UK. There’s no confusion over which country I’m in. Sometimes you’re traveling so much and you wake up, “Where am I?” It’s not like that, because I know I’m in America!

It’s been an unbelievable experience, because as a musician and a songwriter, the most that you could ever hope to achieve is to have people connect with your music and identify with it and be moved by it. I’m getting this opportunity to share my music with people who are really engaged in similar issues to me. When I’m going to the States, I’m performing at a lot of secular events, conferences and atheist conferences, humanist conferences.

Kylie: Now for those people who aren’t familiar with your career, you’ve always wanted to be a musician. I remember interviewing you about this for my blog a while back… but how did it all start, and what are some of the key influences on that career as a musician?

Shelley: Well, yeah. I almost feel like I never really chose it. It was just, that was what it was always going to be. I was always going to be a musician because I grew up in a musical household. My father has a Jewish wedding band, and I learned to sing playing at bar mitzvahs and weddings. I definitely didn’t see this coming, with all the “hava nagilas”! But, I guess, milestones that stick out to me are really when I was 11 is when I started with the band. It was such an early age for expressing myself through music to become a big part of my life, and that’s just become very natural to me now. In some ways, essential. If I haven’t a gigged for a while, I start to feel very concerned. A bit strange!

Then, also, I started writing songs at the same age. I remember this really cute story. One of my friends, she was nine, and she wrote a song. She sang it to me. I was so amazed. I was like, “How did you do that?”

I thought, “That’s brilliant. I’m going to…” and I went upstairs and I wrote a song. I was like, “You’re right! I did it!” That really set me off very early on, as I said, a path of expressing myself and my thoughts and reflections through music.

Then I started performing my original music when I was 15, so I’ve been performing original gigs now for about ten years. Yeah, it’s just been a path of forever, and learning and growing as a musician and finding new ways to express myself and finding new ways that I want to express myself and new things to explore and explore. “An Atheist Album,” which is my last release, has been such a big journey for me, because it’s the first time that I’ve really considered writing in that way of tackling a whole subject in an album.

Kylie: What prompted that move? I mean, were there a number of factors?

Shelley: Yeah, definitely. I guess always approach my songwriting from a personal perspective. I like to share maybe an experience that happened to me, or something that I feel like I can talk about, because it’s something I’ve been through or what I’m engaged with at the time or capturing a moment.

It’s always been about what I’m going through and about, I guess, when I was younger – from relationships with my family, friends, with partners, and then, over a few years, I became an atheist and I became a skeptic. Although it’s so recent, I call myself a “gullible skeptic.” I value critical thinking. I’m still learning how to do it. This process of valuing these new ideals and changing the way I saw the world, it was so influential to me, and I started to get involved in secular activism. That started to direct the nature of my songwriting.

I had a few songs that were about atheism or, I guess, really themed religiously, because of what I was experiencing and that was coming out. I thought, “How nice to take a whole album and really just tackle all the different aspects that I want to discuss with this theme?”

Kylie: What’s been the response to “An Atheist Album?” More and more time, more people getting to know your work. You’re touring in America. You’ve mentioned England as well. Has the response been different overseas as it has been in Australia?

Shelley: It’s definitely received the most traction in the States. I think the reason for that is because it’s a much less secular culture over there. Some people here in Australia will say, “Oh, I don’t understand why you need to talk about these things,” because, in Australia to the person that may not be involved in the skeptic community or atheist humanist community, and they don’t hear religion spoken about in the news or in the media that much, so they don’t think that it’s an issue that needs to really be dealt with.

Whereas, in the States, it’s so obviously an issue. Everybody’s quite polarised by it, so it’s had a really, really strong reception there. It’s pretty awesome to get emails from people saying, “This is the first time I’ve heard my world view reflected in music.” One guy, on YouTube, said I’m singing the way he sees the world, and it makes him feel beautiful. That was so nice.

People who are feeling isolated in the places where they live, because they’re a minority in their communities and they’re able to connect with the music. That’s amazing. Then there’s countries I’ve had responses from where it’s even worse than America for atheists. I’ve had someone write to me from Egypt about how he couldn’t tell his family about his true beliefs in fear of his life. A broad response.

Kylie: That’s good. Have there ever been people antagonistic towards what you’re doing? I mean, you always seem to approach songwriting and your work from a very thoughtful perspective. It’s not condescending or attacking. Is it difficult for people to be insulted by what you’re doing?

Shelley: People will be offended no matter what you’re doing!

Shelley: Yeah, it’s pretty easy to guarantee that you will offend people, but that’s really important to me, that approach. I think that the whole spectrum of approaches is necessary. As someone that was coming out of a faith, I really responded to the more hardline direct, almost attacking atheist viewpoints. That appealed to me and that helped me come out from where I was. It doesn’t come naturally to me. My approach is more enticing people with pretty music! “I’m going to win you over with my beautiful voice and force you to listen to my opinion for four minutes. You can’t interrupt me because it’s a song!”

That’s really important to me, that approach of not attacking but more just sharing a viewpoint. I haven’t too many people who are offended or angry, but of course, you get the emails telling you that you’re going to hell. Some of them are really nice, like, “You’re going to go to hell, and you should stop.” Then someone else: “You’re going to hell!!” But generally, pretty nice.

I got one email that really upset me. It said, “It’s obvious that you hate religious people,” I said, “Well, that’s just ridiculous, because my family are religious, and I’m really close to my family. I love my family! I used to be religious, and I thought I was a pretty nice person then that also deserved love and respect, so there’s no hatred there.”

We had a chat, actually. I wrote back to him. I think he understood better, so we’ve stayed in touch!

Shelley Segal performing is live at Embiggen Books in Melbourne on May 30th! Free! RSVP now. Ph:9662 2062 or head to: http://www.embiggenbooks.com/blogs/embiggen-books/7786433-shelley-segal-performs-live-at-embiggen. 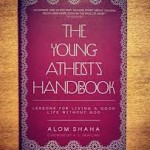 May 5, 2013
Alom Shaha – On The Kindness Of Strangers And The Young Atheist’s Handbook For Schools #SSAWeek
Next Post

May 5, 2013 Interview On The Women Without Religion Forum #SSAWeek
Recent Comments
0 | Leave a Comment
Browse Our Archives
get the latest from
Token Skeptic
Sign up for our newsletter
POPULAR AT PATHEOS Nonreligious
1 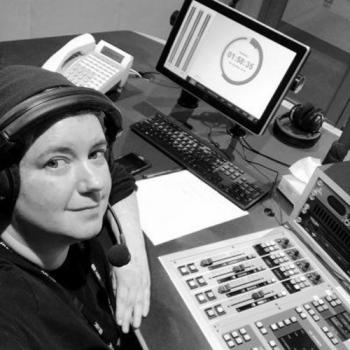