A few links from around the traps, that have distracted me a little during this heinously busy week:

THE NSW Health Care Complaints Commission’s (HCCC) bitter feud with anti-vaccine lobbyists has propelled the state government to dramatically increase the body’s powers, enabling it to launch practitioner investigations without a patient complaint.

Until now the HCCC has been constrained by laws that say it can only investigate a practitioner if he or she is subject to a patient complaint… Introducing the changes to parliament, NSW Health Minister Jillian Skinner said the judgement in AVN’s favour created “significant concern” as it meant the HCCC could not investigate a practitioner or group without a complaint even “if the matter raises a real likelihood of impacting on public health or safety”.

The ABC TV consumer rights show that I regularly promote on this blog is going to stand up against Swisse – ABC show defamed me, Swisse patriarch claims:

In the segment, broadcast on March 21, presenter Craig Reucassel is seen saying the case of Swisse’s product ‘‘highlights everything that’s wrong with the regulation of natural medicines in Australia’’.

Reucassel, his Chaser colleague Julian Morrow, who also appears on and produces The Checkout, executive producer Nick Murray and the ABC are named as defendants.

Fraudster James McCormick has been jailed for 10 years for selling fake bomb detectors… He is thought to have made £50m from sales of the fake devices to countries including Iraq… Police earlier said the ADE-651 devices, modelled on a novelty golf ball finder, are still in use at some checkpoints.

There’s a Token Skeptic podcast interview I conducted with Prof Bruce Hood about the issue a few years back, with a transcript at the CSICOP website. So, yes, it’s taken a while!

What happens when pirates play a game development simulator and then go bankrupt because of piracy?

Finally, An Introduction to Social Media for Scientists – great little resource, from pLoS. Let’s finish off with a video:

SCREENGRAB from Willie Witte on Vimeo.

May 2, 2013
Interview - The Agenda with Steve Paikin: Rise of the New Atheists?
Next Post 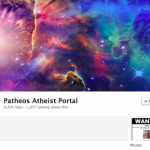 May 2, 2013 Did You Know That There's A Patheos Atheist Portal On Facebook?
Recent Comments
0 | Leave a Comment
Browse Our Archives
get the latest from
Token Skeptic
Sign up for our newsletter
POPULAR AT PATHEOS Nonreligious
1