Census No Religion – An Australian Campaign For The Truth #censusnoreligion

Census No Religion – An Australian Campaign For The Truth #censusnoreligion June 1, 2016 Kylie Sturgess 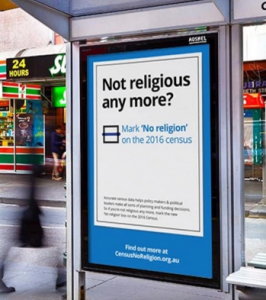 Well, it’s been a while since I’ve blogged… and here’s something to blog about.

Many people in Australia are born into religion but no longer practice or hold the same beliefs.

On the 2016 census, the opportunity to choose ‘No religion’ is now at the top of the list, giving people the chance to consider their answer first.

Accurate census data helps policy makers & political leaders make all sorts of planning and funding decisions. So if you’re not religious any more, mark the new ‘No religion’ box on the 2016 Census.

The Census is an important chance to make sure your interests are met and that views you don’t hold are not over-represented in the coming years.

…After successful campaigns in New Zealand and England/Wales, those countries now report a population with nearly 50% of the population identifying as non religious. This is an increase of nearly 25% over the last 5 years.

Your donation today will help Australia get a more accurate representation of how religious the population is. And this will have impact on the future decisions of our politicians and policy makers.

There’s also a fundraising campaign to spread the message further than social media and traditional media outlets, and you can find that here.

October 11, 2016 Trump-Clinton Face Off (The Musical)
Recent Comments
0 | Leave a Comment
Browse Our Archives
get the latest from
Token Skeptic
Sign up for our newsletter
POPULAR AT PATHEOS Nonreligious
1