Film Review of Hail Satan? Details In The Devil 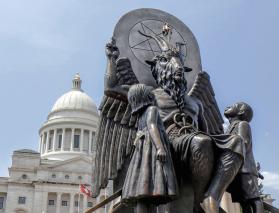 Hail Satan? is a 2019 American documentary film about The Satanic Temple, including its origins and grassroots political activism, directed by Penny Lane. It is currently showing at the Revelation Film Festival in Perth, as a part of its general screening schedule. I had the chance to catch it tonight at Luna Leederville and it should be out for general purchase before the end of the month via all the usual download and DVD providers.

“I feel the sense that the devil has a very bad press. I mean, what is bad? I mean, here we are in Lambeth. I think modern Christians should have a bit less of a ‘get the behind me Satan’ and a more of a ‘come in me old mate and have a cup of tea!” – Not The Nine-O-Clock News.

That sketch is the first thing that comes to my mind when discussing the existence of Satanists or ‘diabolists’; that and the Satanic Bus Poster that the Chasers put onto a bus in London in response to the UK Atheist Bus posters back in 2010.

I guess Satanists are often used as a punchline or as something to pose as a foil for beliefs in general; could the potential existence of an all-powerful evil be seen as deserving of worship? Is there an evil-bible or any kind of code whatsoever? Or is the very notion of a code antithetical to the notion being a Satanist? Is it really about being an anarchist, etc, etc. Certainly the only examples I ever came across people who claimed they were Satanists were individuals (all teenagers) who were using it as an excuse to wear a lot of goth clothing, annoy their parents and not go to church services.

Which leads us to the Hail Satan? documentary that is currently playing in Perth as a part of the Revelation Film Festival. I knew vaguely of podcast interviews with Satanists done by atheists, but never heard anything beyond fairly amusing discussions with fellow American freethinkers about how it was all just humanism in dark robes.

The session I attended was a full one and the building was buzzing for a Monday night; I spotted TV presenter and film star Adam Pearson chatting to fans in the corridor of the venue. About ten people wearing Satanic symbols on their shirts or jackets (all fairly young, fulfilling my earlier stereotypical expectations) and what appeared to be a smattering of wiccans lined up outside the cinema. The usher popped her head in just as the show started to ask if we were all there to attend a screening of ‘Hail Satan?‘ rather than the session next door and was greeted with a cheerful flurry of devil-horn-hand-signs.

Hail Satan? is beautifully filmed. Lots of great establishing shots of the newly-painted Satanic Temple in Salem, use of interview footage over well-sourced and edited news items and archival footage of films and TV shows reflecting the impact of ‘Satanic panic’ re: Communism, Dungeons and Dragons, and the history of abuses in the Catholic church. The disjointed, Hollywood-ish-Aleister-Crowley-styled Satanism from the 60s and 70s has given way to a cultural trend that was described as ‘post-Christian’ by one social commentator, and it seems to be hesitatingly but steadily moving towards a formal organisational structure to better serve their purposes, despite a number of the interviewees being pixelated out or using pseudonyms.

The film depicted the group’s various efforts to promote LGBTI*Q rights, freedom of speech, even environmental awareness (cleaning beaches and freeways) and bodily autonomy rights, via following months of protests, meetings and discussions of various branches throughout the U.S. Much like organised atheism (which was dismissed by one Satanist as ‘boring’ and ‘without history or ethics’, which was odd to me considering the development of atheism from Ancient history to the writings of Friedrich Nietzsche, Bertrand Russell, Madalyn Murray O’Hair, and so on), Satanism in America is not without its growing pains. This included some debate as to how to best fulfil their goals of activism without deviation from their ‘seven fundamental tenets’, and the documentary included why one branch in Detroit ended up being ‘excommunicated’ (if that’s the correct term!).

I wasn’t surprised to see the efforts to build a Satanic monument dismissed as a ‘religious satire’ by legal opposition. The strongest message I got from all the Satanic religion participants in the film was their collective dismay over the growth of fundamentalist Christianity and how their expression of a minority religion faced fervent opposition that was very much akin to any other minority cultural or religious groups in that nation. Encouraging empathy seemed to be the overarching message promoted, rather than any effort to enlist or enrol new members to their cause.

I was wistful on the drive home (not helped by playing Aphex Twin’s Computer Controlled Acoustic Instruments pt2), thinking about how the legal challenges are the greatest hurdle for the expression of freedom of speech and will continue to hinder the efforts of future activists, no matter what minority beliefs they hold. I think it will take change of government in the U.S before another Baphomet monument (or similar) will have a chance to be proposed, let alone installed. Hail Satan? is an enjoyable and thought-provoking film, and well worth catching on streaming venues when you get the chance. If you’ve seen it, let me know what you think, or feel free to suggest any other recent documentary that you think is worth catching in the cinema this year.

July 27, 2019 Lambs Of God Review - And Then There Were Nun
Recent Comments
0 | Leave a Comment
"I never enjoyed Victorian stories. All those stuck up brits and the weird way they ..."
Cozmo the Magician Review – The Dry
"It must be beautiful there! The heartbreaking fact that we are fortunate enough to see ..."
K Sturgess The Great Conjunction (On A Dog ..."
"I went up on Nose Hill in Calgary yesterday evening to be sure I was ..."
Jim Baerg The Great Conjunction (On A Dog ..."
"I just watched episode 1. Everything's a drum!"
MrFribbles Aunty Donna – Explaining a Board ..."
Browse Our Archives
get the latest from
Token Skeptic
Sign up for our newsletter
POPULAR AT PATHEOS Nonreligious
1