Superstitious Thoughts on Friday the Thirteenth 2019

I finished my M.Ed on measurement of superstitions back in 2011, but around Friday the thirteenth (which can happen about three times a year! In 2019, it’s just for today) I’ll have a few people getting in touch with me to talk about the associated beliefs about the day. So here’s a few pointers for anyone going ‘wtf, isn’t it the same as every other day in the year? Just how problematic can superstitions get?’

Being superstitious is a world-wide phenomenon 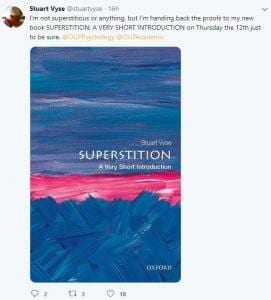 . Many of us have been like one of my students going in for their semester exams, carrying with their pencils a cute little item or toy (as famously demonstrated by Mr Bean in this popular episode), or wearing a certain item of clothing or performing a ritual (not necessarily a religious one) in order to make them feel comfortable about the potential outcome of a test… even though it might seem absurd upon reflection to believe that a green plastic dinosaur will have any influence whatsoever on your performance in Calculus.

Best place to start learning about superstitions? A book called ‘Believing in Magic: The Psychology of Superstition‘, by Stuart A. Vyse. (he’s recently announced he has a new book on the way too!) He writes that ‘while no simply psychological truth can account for such diverse practices as numerology, psychokinesis, and the use of good-luck charms, modern psychology can account for many of our common superstitions – they are not abnormal. They are, in fact, a largely predictable outcome of the processes that control human learning and cognition. Indeed, some of the characteristics that have led to our emergence as the dominant species on the earth, are the very ones that make us superstitious.’

We’re looking at things like discriminative stimulus and partial reinforcement – we do what works for us, because it worked before or maybe they’ve seen it happen with others who succeeded. When an organism (whether it’s person, pigeon or whatever) learns to make a particular response in the presence of one stimulus but not another – such as touching a bar when you see a green light, but not a red light – then stimulus discrimination has occurred. Your response is now under stimulus control. In general, it allows you to learn what is appropriate (or reinforced) or not appropriate (not reinforced) in particular situations.

Partial reinforcement with lucky charms or ritualistic behaviour is spotted in many different places. Some of the more popularly known (and studied!) are sporting rituals, such as a fixed sequence of actions like how you put on your batting gloves (as spotted with many famous sporting people who are under almost constant media scrutiny – like when Jelena Dokic bounces the ball a certain number of times), or wearing ‘lucky items’. It even extends to group mentality with people watching the game – how many of us wear lucky team shirts in the right colours, or feel things will go well if you all sit together with friends or in a particular area of the stadium?

If the ‘lucky’ ritual precedes success long enough, failure to execute it will distress and actually impede your performance. You build up enough confidence about having your plastic dinosaur on your desk, or saying ‘merde‘ to exactly five people before you dance ballet or chew mints before the exam (which was my ritual), you’re going to feel more confident in yourself. This then influences your performance – an ‘A’ seems guaranteed because you walk in fully prepared with Minties on your side!

Superstitions are common in situations where you are unsure about the outcome or where the consequences can range from unpleasant to even fatal. The belief that they work is supernatural, writes Bruce M. Hood in another awesome book I recommend, called  ‘SuperSense: Why We Believe in the Unbelievable’:

It lingers in the background of our minds, waiting for an opportunity to make a guest appearance at times of stress, when rationality can so easily abandon us. ‘Doing nothing’ is sometimes not an option – and anything we feel that can affect outcome is better than nothing, because an inability to act can be psychologically distressing. We want control in a situation where we feel there is no control.

So, lucky charms can work… if it’s all in the mind. They can potentially reduce stress. But losing your special charm or feeling worried about the lack of luck you have when your exam is coincidentally set for Friday 13th can have an influence on your behaviour – and not for the best.

So, I suggest to future students that they don’t become so reliant on objects external to them when it comes to being ‘lucky’. Plastic dinosaurs can be misplaced, a lucky coin could get stolen. Find a comfort zone that you can replicate without too much trouble. Try to get the situation into perspective, or perhaps use rituals that can be done anywhere or have items that cheer you up but can be replaced. As I’ve said in a TEDxTalk, why not just sing a song? 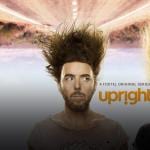 December 25, 2019 TV Series Upright - The Things They Carried
Recent Comments
0 | Leave a Comment
"I never enjoyed Victorian stories. All those stuck up brits and the weird way they ..."
Cozmo the Magician Review – The Dry
"It must be beautiful there! The heartbreaking fact that we are fortunate enough to see ..."
K Sturgess The Great Conjunction (On A Dog ..."
"I went up on Nose Hill in Calgary yesterday evening to be sure I was ..."
Jim Baerg The Great Conjunction (On A Dog ..."
"I just watched episode 1. Everything's a drum!"
MrFribbles Aunty Donna – Explaining a Board ..."
Browse Our Archives
get the latest from
Nonreligious
Sign up for our newsletter
POPULAR AT PATHEOS Nonreligious
1