Just to commemorate the day, here’s something from the album The Race for Space, that I used to play on RTRFM now and then.

The Race for Space is the second studio album by British alternative group Public Service Broadcasting. Working with sound samples from the British Film Institute, the album relives the story of the American and Soviet space race from 1957–1972.

This song, “Go!” is specifically about the Apollo 11 landing.

July 17, 2020
Ophiuchus Ain't News (But At Least Astronomers Might Get Less Questions About Fortune Telling)
Next Post 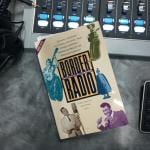 July 31, 2020 The Magic of the Airwaves - Border Radio and You Be The Judge
Recent Comments
0 | Leave a Comment
"I never enjoyed Victorian stories. All those stuck up brits and the weird way they ..."
Cozmo the Magician Review – The Dry
"It must be beautiful there! The heartbreaking fact that we are fortunate enough to see ..."
K Sturgess The Great Conjunction (On A Dog ..."
"I went up on Nose Hill in Calgary yesterday evening to be sure I was ..."
Jim Baerg The Great Conjunction (On A Dog ..."
"I just watched episode 1. Everything's a drum!"
MrFribbles Aunty Donna – Explaining a Board ..."
Browse Our Archives
get the latest from
Nonreligious
Sign up for our newsletter
Related posts from Token Skeptic