You’d think that they would have had enough of reality programming and all its machinations, manipulations and downright un-reality, but it appears the Osbourne family is returning to television.

It’s a part of the Travel Channel’s planned screening efforts, by filming shows with stars in pandemic lockdown (just in case you wondered if there’s any outlet that is exempt from those kinds of shows being aired, the Travel Channel have indeed done it in the past and are trying it again).

I am again reminded of a French and Saunders’ skit about ‘Mostly Haunted’ TV-style shows and the “blood-curdling creams” which ensue: 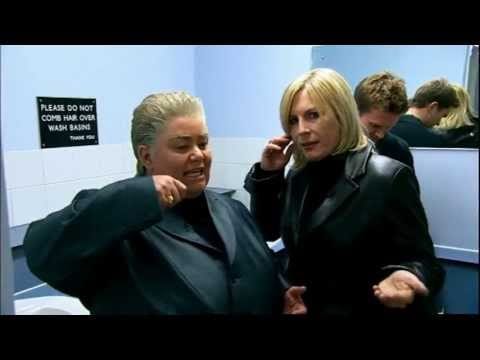 It’s called The Osbournes Want To Believe for the Travel Channel, with three of the Osbournes (Ozzy, Sharon and Jack – absent is Kelly who first appeared in the MTV series that made her name and has moved on since) talk about filmed phenomena. While Halloween-style horror decor is not something unusual for the family, doing a Gogglebox-style analysis of footage purported to be of UFOs and things that go bump in the night is a little more novel. Jack Osborne previously had not one but two seasons of a series with Katrina Weidman, which is described by various reviewers on IMDB as more horrifying in its efforts to be taken seriously than any actual horror. Someone must have convinced the Osbourne family to give this another round, despite the widely-reported nightmare of ever letting reality TV go anywhere near their lives in the first place.

I guess that brings it around to why these shows persist; as one of the IMDB reviewers pointed out, if you’re familiar with a place that is being investigated, or have heard some stories about it, it’s kind of cool to see it on TV. Then to see it misrepresented, blown out of proportion or possibly lead to some tourism dollars, you get more wrought-up about it, and it becomes something you can yell about on Reddit. I wouldn’t be surprised if most of us can point to a place on a map that local legend has is ‘haunted’, or know of a venue nearby that has some wacky urban myths surrounding it. And let’s face it, everyone can at least draw the shape of a “UFO” if not exactly point to hard-cold evidence of their existence.

Perhaps this tired revamp will be amusing in some sharp-witted way, with Sharon making quips about the bad lighting, worse audio quality and wobbly camera-work by some hapless paranormal enthusiast that wanders around a condemned building that really should have had better security. Maybe Ozzy will ask pertinent questions about the historical relevance of the footage taken of fuzzy objects in the sky and realise that he’s done music videos of the same vintage (but with far better special effects and soundtrack), and ask if they couldn’t have shelled out a little more budget to make it even slightly convincing.

Honestly, turning a truly tired paranormal investigation concept (even one done from the comfort of their own pandemic-isolation couches) into a comedy show a-la What We Do In The Shadows criticism of just how neurotic-making these concepts can potentially be would make a refreshing change from the endless ‘what was that!?‘ and jumping at every bump and bleep of a misused magnetic stud finder, while the camera technicians shake their heads sadly at what has happened to their careers in the background. I’m not keeping my hopes up.

July 2, 2020
Book Review: Devolution (If Bigfoot Exists, He's Not Happy About Us)
Next Post

July 17, 2020 Ophiuchus Ain't News (But At Least Astronomers Might Get Less Questions About Fortune Telling)
Recent Comments
0 | Leave a Comment
Browse Our Archives
get the latest from
Nonreligious
Sign up for our newsletter
POPULAR AT PATHEOS Nonreligious
1