Reunite The Marbles (And Save Stonehenge!)

Reunite The Marbles (And Save Stonehenge!) November 24, 2020 Kylie Sturgess

After visiting the incredible new Western Australian museum, Boola Bardip, this week, I’ve become attentive to news about the sensitive preservation of history.

One particularly strong trend in terms of historial preservation that has got worldwide attention for quite some time now is the ongoing efforts to return the Parthenon Marbles to Greece. This  gained even more traction with the start of Brexit.

I first learned about them via this Intelligence Squared talk from 2012, featuring Stephen Fry:

“The Hellenic republic today is in heart-rending turmoil. A humiliating sovereign debt crisis has brought Greece to the brink of absolute ruin. This proud, beautiful nation for which Byron laid down his life is in a condition much like the one for which he mourned when they [the Greeks] were under the Ottoman yoke in the early 19th century,” – Stephen Fry,  Greece is the Word.

Let’s help reunify the Parthenon Sculptures in Athens, where they belong petition is here – but I think this hilarious video, about the recent roadworks around Stonehenge also helps with lending perspective:

How would Brits feel if someone took half of our most precious ancient monument away for ‘safekeeping’? We thought we’d find out, and have rescued part of Stonehenge for you. However, if you think that ancient artefacts belong in the places they were created – and that the #ParthenonMarbles therefore belong in Athens – please sign our petition: https://bit.ly/trustinthem 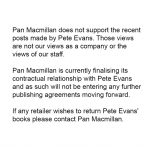 December 4, 2020 Darkfield's Flight - Crash Landing Never Felt So Good
Recent Comments
0 | Leave a Comment
Browse Our Archives
get the latest from
Nonreligious
Sign up for our newsletter
POPULAR AT PATHEOS Nonreligious
1