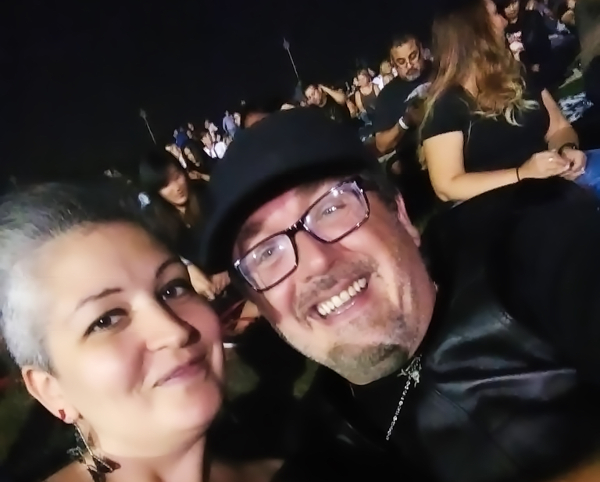 My fiancee’ and I have a lot in common, but our tastes in music differ. Anyone who knows me will know that my favorite band is Bon Jovi. My fiancee’s favorite band is Depeche Mode. Both bands started in the early 80’s and both are still creating new music and packing venues with fans of all ages. As they season, their music grows and matures. Depeche Mode hit me last February with their pre release song and it has me longing for revolution.

I heard this song about revolution in February on the radio before she did. I let her know that they had a new album releasing soon. Then I told her they were going on tour soon and that I just ordered tickets. Prior to this, my only connection to Depeche Mode, besides being tangentially aware of their radio hits in the 80’s and 90’s, was in 2014 when I had the lead singer of the band “Feathers” in my taxi and she told me about what it was like opening for and touring with Depeche Mode.

The song, “Where’s the Revolution”, asks some questions about the current world in crisis. Who makes the decisions you live by? You? Your religion? Your government/country? Ultimately, there is one question or lament. With all that is going awry with lives ending and rights violated, how much longer do we stand silent before we stand up against the powers that be? In other words, where is the revolution?

In a Rolling Stone Magazine interview with Depeche Mode they had this excerpt that hits home for me:

“I wouldn’t call this a political album,” Gahan says, “because I don’t listen to music in a political way. But it’s definitely about humanity, and our place in that.” He sings of bigots “turning back our history” on “Backwards,” cheekily calls for change in “Where’s the Revolution?” and looks inward on the brooding “Poison Heart.” Musically, these songs are dark-hued with complex textures that are both icy and warm sounding…”

Last week I finally got to see the concert I got tickets for last February. We had a wonderful time. Hearing the song live in our current affairs struck me. This was no longer just a song on the radio and it most certainly was not a pretty hymn, it was an honest, albeit, sarcastic question. But a question to be taken seriously.

As a parent of a transgender person, I can tell you that the time for revolution is now. With President Trump in office making bedfellows with the Family Research Council, there is a plan for the purge of transgender people from America and it has begun.

Revolution is being attempted but not enough of us are boarding the train of progress. Black Lives Matter, The Women’s March, GLAAD, HRC, The National Center for Transgender Equality, and more are on the forefront of fighting for change and daring to resist. As I studied history, I have learned something about the revolutions. As uncomfortable as this is, allies need to come forward for the change to take affect.

For women to be able to vote, the suffragettes needed allies to hear them, listen to them, stand with them, and put pressure on the system to change and pass the 19th amendment. The Civil Rights Act of 1964 needed white people in power to sign into law that which leveled the playing field. The marches and words of King had to bring the rest of us to be inspired and moved.

Today, we have a president that is out of control and has shown his disdain for women, transgender citizens, hispanics, muslims, people with disabilities, and others. Executive order after executive order erodes rights. Nazis and Klansmen get dapper haircuts, call themselves the Alt-Right and get to call for the elimination of other people, plan violence, and even drive cars through crowds of people and it is Antifa that gets declared a terrorist organization by our president’s security forces.

Black people, women, LGBTQIA, Latinos, and others are under assault and many in their communities are rising up and we are sitting idly by with pretty tweets and strange sentiments seeped in privilege amounting to little meaning.

In the wake of Nazis and Klansman in the streets something wonderful happened. People rose up in counter protest and pro confederate statues came tumbling down. Symbols of hate and oppression that stood too long were removed. I saw many of my white progressive brethren sharing memes and quotes that they wish instead of this sudden removal, that we could have these lovely white appealing coca-cola kodak moments where minsters come and people sing hymns and we give white apologies and blah blah blah freaking blah! How my tribe finds ways to make this about them astounds me and makes me embarrassed.

Black people are afraid to get pulled over right now. Women are being raped and assaulted with little legal recourse right now. Horrific and terrifying ICE raids are restricting the safety of Latinos right now. LGBTQIA children are unsafe in schools right now as are their adult counterparts coming home from bars and clubs. Transgender people like my child are being restricted equal access to public restrooms and the military right now. Right now, we do not have time for progressive white kumbaya moments because the the Alt-Right, Evangelicals, and President Trump are moving at a rapid pace.

Humanity is not completely dark and dreary right now. There are many wonderful things going on in this world. I truly believe that the change is coming and we will continue to march forward. That said, we need a greater sense of urgency. I am asking those of you who sit on the sidelines to get involved. If you are of means, many of these causes need money to do the work. We also need educated people on the streets standing with Black Lives Matter, the Women’s March, the LGBTQIA community, the Latinos, the Muslims and pretty much every one of our neighbors and their children who are put at risk by racism, misogyny, religious bigotry, transphobia and so much more.

So I close with a song in my heart and love, anger and hope guiding my actions:

Where’s the revolution? Come on people you’re letting me down. The train is coming. Get on board.

September 6, 2017 New Lotus Rising: Introducing Alayna Koman: A New Voice That Matters
Recent Comments
0 | Leave a Comment
Browse Our Archives
get the latest from
TransParent Expedition
Sign up for our newsletter
POPULAR AT PATHEOS Nonreligious
1