Danica Roem’s Election and What It Means To This Parent 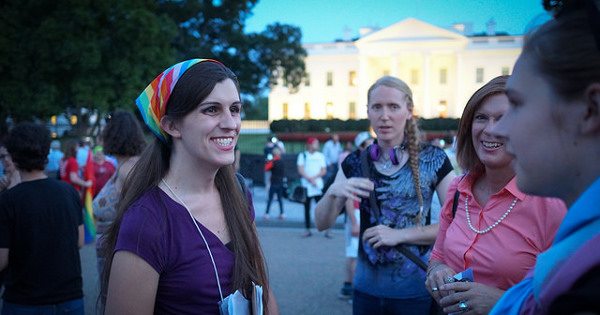 This morning my news feed is full of celebration, and a few unhappy people. Danica Roem won the election for a seat in Virginia’s House of Delegates. Why is this a big deal? Danica Roem is the first openly transgender person to run in an election and win said election in the United States. There is going to be a lot of celebration about this. There should be. I grinned ear to ear when I first read the news on LGBTQ Nation. There are a few thoughts I have on this victory.

When Danica Roem first ran for office, she ran on the purest of reasons. She was upset about a road she has to use almost every day that has been in disrepair. She just wanted the road fixed. This led to her doing the hard work. Walking the streets, knocking on doors, making calls, keeping a steady stream of social media active. She went to the interviews and public appearances fearlessly.

In the election she faced opposition. Her opponent, the incumbent I do not wish to name, went after her with bloodlust. He was cruel and openly transphobic. He misgendered her deliberately (I have written about the effect misgendering has), he played dirty in the ads, and he let the arrows fly. Danica showed herself to be a fighter and won a huge victory by quite the margin.

As a parent, here is what I love about it. While we are rightly celebrating this victory that she is a transgender person and one of her new peers has even expressed looking forward to working with Danica in the fight for equality, Danica is seeing the bigger picture. Danica started this campaign on an issue that affected her, a road that needed repair. She went door to door to find out what mattered to her neighbors. She made public appearances and stated her case for how she would represent them. The roads, the schools, local ordinances and taxes and all the other things people are concerned about. Parentally, my child has an example of hard work while overcoming adversity.

She had to show that she heard them and was ready to represent them more than her opponent. I have had a state representative knock on my door and sway my vote by a 20 minute conversation at my door about things that mattered.

In a world where assault of transgender people is on the rise, she went door to door not knowing who was behind that next door. When they answered, she likely smiled and started asking them questions about what matters to them while she said what mattered to her. She ran a campaign on the basics and held her head high courageously facing the public.

Danica did not run solely on one issue. She ran on representing the voters in her district. She was not just elected by transgender people and the rest of the LGBTQIA community and allies. Danica was elected be her neighbors who feel she can represent the needs of the community. All of us.

Yes, Danica is the first elected openly transgender woman. But she is also more and as her career continues and others follow the door she has opened, we will see the actions she makes for her district, her state, and the nation.

My son wants to go into the psychological sciences. He does not want to be a “trans social worker” or a “trans researcher”. He wants to help all his future patients. The first in a field of employment, the first in a school, the first in any of these things will first be seen for that controversial matter they are. This can be a gender, a person of color, a sexuality, or a gender expression. That first may have to endure attack ads and risk their life to do something others in that field do without danger. For instance, knocking on doors. That first paves the way for it to be possible for others to follow.

Transgender children all over America have learned from the President and DeVoss that their rights do not matter in school or  to the Commander in Chief of the armed forces. They have also seen that a brave transgender person, inspired by a crummy road, can take a hard road to victory and affect change.

Congratulations, Representative Danica Roem. Thank you for being another inspiration to young people across the country. May you lead and represent well.

November 4, 2017
A Terrible Little Story About Rape: She Said Me Too
Next Post

November 9, 2017 Asking About a Minor's Genitals is Creepy And Disturbing
Recent Comments
0 | Leave a Comment
Browse Our Archives
Follow Us!