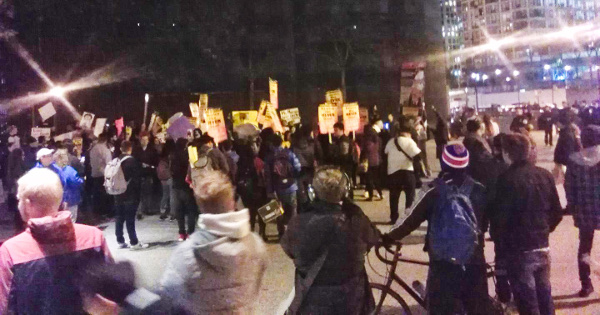 When Trump was elected president, we feared it was going to be bad for transgender people, the rest of the queer community, minorities, women, and pretty much everyone else. A year ago we had fears. I do not think we had any clue how bad things really would be a year later. We never could have imagined the cognitive disconnect of some and the deep divide we are seeing now. But we knew then that a threat to freedom and civil rights was getting ready to move into the white house and run the executive branch of this nation.

I was at a posh hotel in downtown Chicago shooting a wedding. I was wearing a black pinstripe suit for this affair. The reception hall was a few floors up. Shortly before the reception began we could all see a protest start in front of Trump tower from the window just outside the reception hall. This was a gay wedding I was shooting. A lot of the wedding goers pressed their faces to the windows to see the protestors and cheer them on, even though they could not he heard.

During the night I would look outside the window occasionally and see the crowd grow and police enter. My son was at my place with my fiancee’ while I worked late for this gig. I texted them both when I could and told them how great the wedding shoot was going and about the protest. Then came a period for the vendor break. The band, myself and other vendors had a period where we went into a separate room and were served a meal.

I went into the room, grabbed a bottle of water, crammed some bread in my mouth, put on my coat, and went downstairs to join the protest. I felt alive out there. It was the first time since this election happened that I felt a wave of joy. We can complain on the internet and enjoy confirmation bias, but there is something about the crisp night air, people holding signs, singing, and right in front you in this shared experience.

The police were there. This was not a bad thing. They had to keep the protestors from entering Trump property. But they also would block the streets when the protest moved and marched to different locations around the tower. There were no counter protests but every so often someone would drive by and scream to the crowd to get a job or to f**** off. At one point someone tried to agitate the crowd and the police kept the individual at bay.

Conversations were had. I spoke about my son and my girlfriend and my concerns with other protesters. They told me about their lives, their families, their fears and their stories. Different concerns and different stories and we all stood together in the name of love. We laughed, we sang, we chanted, we shared and there was even a tear or two.

I sent my son and my fiancee’ cell phone pics of the protest through text. They got concerned and told me to be careful. I told them we were safe and having fun. They kept telling me to be safe and reconsider my actions. To be honest, that encouraged me to send group selfies of me and some of the protesters.

Eventually, my vendor break period came to an end and I had to go back up again. Before I did, I hugged a few people and shook some hands. We shared our stories and our fears and our hopes. We did not just oppose something, we stood for something and we were at the beginning.

Some of the people who have marched for and with BLM, the Women’s March, and other groups have recently won elections. Others spend countless hours writing representatives, blogging, informing, changing, and organizing.

The point of all of this? When the protests first happened, even many commentators on the liberal side mistakenly called the protests and march useless one off gestures. They were not there. They never heard the stories, smiled at another soul with tear stained eyes as they shared what mattered to them. Additionally, they never read the literature being distributed that told you how to make a difference when you got home. Things that voters and citizens could do every day. They never went to the online groups that were started by the organizers of these protests.

Just as it is easy to sit and judge protestors and their goals from a space of willful ignorance, it is also easy to judge those things we are not. The only way I can even begin to understand what it is to be hispanic, black, a woman, or LGBTQIA in America is to listen to them. It is not for me to tell any of these groups of people how to fight for their rights, what to think of their situations, or to judge them.

Every day they face this judgement. I have, in this column, pointed out how others see my son. They see him as someone who has made a choice to be transgender. Some have said that he lacks the cognition to make decisions regarding his life, and by default they have also judged me and every parent, psychologist and physician who supports transgender children and walks this road with them.

I do not know if we are moving forward or backwards in the fight for equality and acceptance. I do know this, the ones who are fighting know what they are doing and why they are doing it. It is easy to judge without education and understanding. It is easy to think you know better than the person immersed in a struggle without listening to them.

Ironically, we live in an age where information is more readily available than it has ever been. Yet, when I speak with people, they think it is impossible to understand. It is not impossible or difficult, they have merely chosen not to engage and educate themselves. If they did, perhaps they would join us in creating a land where all are created equal.

November 15, 2017
The Cognition of Transgender Teens and Decisive Decisions
Next Post

November 18, 2017 A Man With a Whip in one hand and Emancipation in the Other
Recent Comments
0 | Leave a Comment
Browse Our Archives
Follow Us!

Hitler and Trump: comparisons being made...
The Freethinker
Related posts from TransParent Expedition