Palatine Area Residents Discuss a Teen at a School Board Meeting 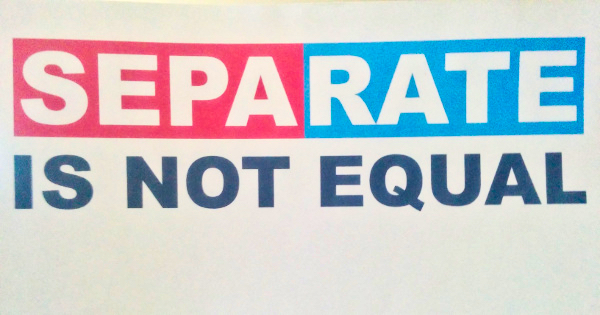 For over two years, Palatine Il has been a lightning rod in local and national news for it’s treatment of transgender students. From the loins of this controversy has sprung a new hate group called Parents for Privacy. On Thursday, December 14th, Palatine School District 211 had their board of education meeting that is open to the public. The hate group came, so did those who love and support transgender teens. Why? Because a young lady named Nova M is suing the school regarding access to facilities.

Nova was not present at the meeting, but residents of Palatine and the surrounding area were. People in support of Nova held signs. Most of them read “Separate Is Not Equal”. The hate group held signs that mostly read “Accomodate Don’t Violate”. This was the environment normal school board business has to begin under.

The board may have heard every monologue respectfully, but not everyone who addressed the board was respectful. There were three instances that the chair had to stop proceedings to remind the public of the rules of conduct. All three of those instances came from those who are members of, or share the ideology of, Parents for Privacy.

The first issue that came up was a gentleman who was upset that he did not have the full 5 minutes normally given to him. He asked if someone from his side could yield their time so he could have his 5 five minutes. The chair allowed him this. When his time expired, he kept talking and continued to speak over the beard members telling him his time had expired. When voices were raised, he ceased and sat down.

The second issue was a man who came up to the podium (wearing a camouflage vest). He came up there using vulgar language, berating the board, insulting not only transgender people, but muslims and women. He also told the board that Trump has their back now. When his time expired he escalated the matter, raised his voice, and refused to yield the floor. As he was being forcibly removed he bragged about how he personally got another administrator in another district fired and he would do the same here.

The third issue was a woman who spoke out of order and out of respect for the proceedings from the floor to bemoan the loss of the two minutes. The chair, graciously, recognized her, explained to her that this was in their by laws and within their rights. It has also been mentioned before the meeting and was not a secret.

The people who spoke on behalf of Parents for Privacy had disturbing talking points. They kept referring to Nova, a transgender women, as a biological male who thought he was a girl or a biological boy suffering from dysphoria. They spoke about scary locker rooms. Locker rooms with penises and vaginas everywhere. They even drew allusions that this would lead to pregnancies and assault.

One parent from their side passed out alleged statements from students as if she had a smoking gun that would end this issue once and for all. I looked over the document she handed to all the board members. This document does not meet the standard of a legally admissible document. This is, at best, written hearsay. This is as problematic as their science. Many of the scientific studies they quoted came from one of their supporters, The American College of Pediatricians. The American College of Pediatricians is a group I have written about twice. The first time was to take to task a letter they wrote that was provably false. Additionally, I used them as an example of chaff that needs to be sifted from the wheat when vetting facts. This is a group that deliberately misrepresents science.

There is an irony that in the wake of a celebration of two teachers recognized for their work in the sciences and a celebration of 4 students who excelled in their ACT’s that members of this hate group would quote tainted and incorrect studies. They did this while calling peer reviewed science on matters of gender to be junk science. They speak of there being only two genders with no nuance, respect, or scientific backing. As a former minister, I can also tell you that their theology is as deep as a puddle on a sidewalk and their biblical understanding as accurate as their science.

The people that do not want Nova to have her civil rights are a fascinating lot. They wield the Bible as a weapon. There is no respect for rules of conduct. Threats are acceptable. This is a group that quotes science without vetting the sources and accuracy just because it supports their view. They insult muslims, women, LGBTQIA people and the former administration while claiming they are concerned about young women. Further, some of the students who won accolade from the school board were not only women, but women of color from middle eastern regions of the world. While verbally assaulting Nova and trans children, they also reduced the dignity of every muslim and female student, resident and staff member.

The other side? The side I stood with? They often thanked the board for allowing us time. They spoke of patriotism and reminded us that the pledge of allegiance includes a nations that is indivisible with justice for all. This was a point to be celebrated and not used as a weapon. LGBT and other marginalized students were told that they were seen and heard and loved.

There were no threats from my peers. They were respectful of the time, the board, and even those who would, and did, verbally assault Nova and other teenagers like her.

It was moving to hear the words of a trans woman who spoke. I felt the pain of the representative of Equality Illinois when he took the podium and could barely hold his composure as his voice and his spirit cracked hearing the hateful words spoken about children.

When a cisgender teenage girl who is a sophomore came and spoke up in support of her trans peers, I was moved. The young lady explained the reality of the locker room as being a space where you are not seeing the “privates” of other students. Her description stood in stark contrast to the “sexual and societal” anarchy spoken of by elected U46 school board member Jeanette Ward (Ward is an elected official, the only one affiliated with that hate group I will name) when she took the podium. This young lady also took to task the dystopian locker room world of penisis, rape and pregnancy described by members of Parents for Privacy.

There is one last matter of character and dignity that I wanted to address. That of my son. During the proceedings, I took a photo and the name of every person who spoke at the meeting with the exception of the two minors. My son asked me not to publish any names of photos even though it was a meeting on the public record and news cameras from CBS were present. He reminded me that, though people who stand for equality are largely reasonable, he would not want something I wrote to be used to dox a member of parents for privacy.

I still have all the photos, statements, their literature, and video should I ever need it for any reason. But my son brings up a valid point about protecting Parents For Privacy from the same harm that they would likely not protect him from. It is the right thing to do.

Members of Parents for Privacy have, historically, been party to doxxing people who disagree with them. They commit verbal assault and cause harm to a teenager every time they misgender and misdiagnose. These adults sometimes threaten others in open forum meetings and sometimes have to be forcibly removed from public gatherings. They use provably false science to make their case and justify their actions. Finally,  are proactive in restricting the rights and reducing the dignity of other human being, including my son. My son does not want them hurt.

Frankly, my transgender son is more man than the gentleman in the camo vest. A man who insults women, muslims, and LGBTQIA people. A man who threatens elected officials when he does not get his way and is asked to leave a room for abusive vulgar speech and disorderly conduct. My son has more character than any of the men who spoke against Nova. He’s more man then men who held signs in opposition of her civil rights.

As far as Nova. I have personally known her and her mother for almost 2 years. They have both been to two of my art shows. One was a charity fundraiser for a new playground for orphans. The other was a gallery opening in which I was a featured artist. It was an honor to have them present in these moments for me. I have a picture of my son and Nova at the gallery show. It is an honor to stand for Nova in this moment.

Nova is a remarkable young lady who, despite an uphill battle to exist, has a most gracious smile that lights up a room. She also has a positive attitude that is infectious. She is grace and poise personified. I have never once seen Nova as anything other than a remarkable and delightful young woman who is stronger than people realize. To hear some of the things Parents for Privacy have said about her is shocking, disgusting, and disturbing.

But there is also hope. I am honored to have stood with my fiancee’, several parents of transgender teens, transgender men and women, advocates, allies, and supporters of equality. They showed strength in chartacter, maturity, and dignity while making their points very clear in a respectful manner.

For readers of the TransParenting 101 series, we will be resuming that on Monday. This was too important an event not to discuss. Please share this column. It is important that people know about Nova, groups that will hurt a teenager, and all the Nova’s out there fighting for their rights.

December 18, 2017 TransParenting 101 Lesson 4: Dealing With "Friends" and Parents
Recent Comments
0 | Leave a Comment
Browse Our Archives
get the latest from
TransParent Expedition
Sign up for our newsletter
POPULAR AT PATHEOS Nonreligious
1