The Discussions We Don’t Have: The Seemingly Normal Day

The Discussions We Don’t Have: The Seemingly Normal Day December 1, 2017 Patrick L Green 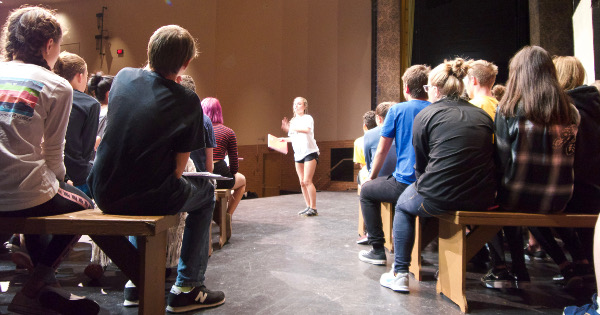 One morning my son was over at my place. I made some waffles. This was the beginning of a seemingly normal day. Over breakfast he asked Giselle and I if it would be all right if he went to Six Flags with Ian and Jasper. I asked him what time he planned on being home. He said sometime between 9 and a 11 at night. I asked him who was driving, he said Ian’s mom is. I said sure, have fun, make sure your phone is charged.

As my son was leaving I gave him some money for food and gave him a ziplock bag. He asked what that was for. I told him if was for his cell phone when he goes on water rides. He rolled his eyes a little, so I gave him my “dad glare”. He quietly put the ziplock bag in his front pocket.

A few minutes later, Ian’s mom pulled up. I came out with my son and said hi to his mom. I looked in the car and said hi to Ian and Jasper. They both think I am the cool dad because I swear a lot and still rock leather jackets. We chatted for a few moments as my son got in and off they went.

My fiancee’ and I ran some errands and took in a matinee using an online coupon. Then we went over to her friend’s house. We were sitting there having a little wine and enjoying adult conversation when I felt my phone vibrate. It was a text from my son telling me that they were going to be home in about 45 minutes. I asked if everything was all right. He said that everything was fine, it was just too crowded and the lines were too long.

I told all the adults that we had to leave and go back to being parents. We got in the car and drove back to the complex. When we got to the building, she went upstairs and I waited out front for the car to pull up. This time it was Ian’s dad at the wheel. He chatted briefly as my son got out of the car. Ian and Jasper waved excitedly at me and I made weird faces and waved back to their delight.

I spent a few minutes asking my son about all the things they did, what was eaten, and did they have fun. He filled me in on all the details. They had a wonderful time. After hearing some of the details he went to his room.

As I was getting ready for bed, I checked in on him and saw him multi tasking. He had his homework out and was skyping with friends as he did his homework. I smiled as I noticed that his cell phone was still in the ziplock bag I gave him for water rides.

Why is this conversation important to have? All of the teenagers in this day were transgender. The day was a very normal day for a teenager. They dealt with parents asking questions, they had fun together, and there was homework. They have crushes, silly moments, heartache, frustrations, anxiety, hopes, dreams, and adventures. Further, they do not walk around in a constant state of confusion and they are not part of some LGTBQIA agenda. Their agenda is the same as any other teenager.

What is different? They take hormones, they hear about themselves and others like them being discussed on the news by politicians and religious leaders. “Concerned parents” try to restrict their access to bathrooms and locker rooms at their schools sometimes. They do not get invited to sleepovers with their cis het friends. Sometimes they are treated differently by staff at restaurants or retail stores. They are incredibly self aware because they had to make choices and prove to the world that they understood their gender identity to get the hormones that they need to be themselves. They have also had to explain to extended family that they are not deluded or colluded. Some of them, like my son, are not allowed to play with some of their cousins anymore. Cousins that they have literally played with and grew up with since early childhood.

Some people like to call cisgender heterosexual children normal. This one day in the life I shared with you is a very normal day among normal teenagers who lead normal lives. What is abnormal is the reactions others have to their gender.

This is a very important conversation that we are not having. It is mundane and not as sexy as non existent agendas. It is more titillating to the ignorant to paint them as abnormal. But this is my daily reality. As I write this, my son is at school having a very normal teenage day and I am certain he did his homework and studied for any tests or quizzes he may have today.

November 30, 2017
Discussions We're Not Having: Reasoned Conversation Vs Conflict
Next Post

December 4, 2017 TransParenting 101: Introductions: So Your Kid Came Out?
Recent Comments
0 | Leave a Comment
Browse Our Archives
get the latest updates from
TransParent Expedition
and the Patheos
Nonreligious
Channel
POPULAR AT PATHEOS Nonreligious
1