All That This Father Wants and All I Didn’t Want: Ramblings of a Dad

All That This Father Wants and All I Didn’t Want: Ramblings of a Dad May 15, 2018 Patrick L Green 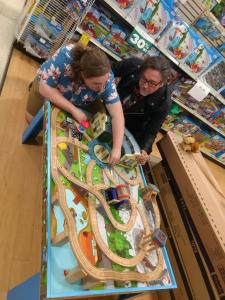 I had my son last weekend. My fiancee and I took him out to dinner Friday night. After dinner we went to Toys-R-Us one last time. We each got a small item to remind us of the store. My son and I also took some pics and reminisced of some of our favorite sections. When he was little we both loved the Thomas The Tank Engine toy line. After that we went to an all ages bar/entertainment center to enjoy their karaoke night. On Saturday I had to work. After work we played Scrabble for the first time in years (that was what I bought at the toy store). Sunday, we grabbed some hot dogs, wandered the mall aimlessly, went home, and played more Scrabble. That was all this father wants.

Two weeks ago we saw a Bon Jovi concert together. Three weeks ago he went to his Sr Prom. He and his date had matching boutonnieres handcrafted by someone I went to high school with. 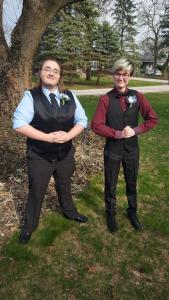 Over the last few weeks we have had some overdue father/son conversations about things he has wanted to say to me that I have not been hearing as well as I could have. That was all this father wants.

In less than two weeks he graduates high school and gets ready for college. He is graduating with full honors. We have made a plan to spend more quality time together this summer. He is blossoming into a fine young man and he is desiring a deeper and more rich relationship with me. That was all this father wants.

When I was invited by Patheos to write this column, I saw an opportunity to connect with other parents who may not have a full understanding of what it means to love someone who is transgender. My hope is that through the eyes of a parent, they would see only love. That was all this father wants.

During the last year I have engaged with people in the Trans and Non Binary community. They have sometimes celebrated me, sometimes corrected me, and always accepted my son. They have become my teachers, my friends, and when they call me an ally, I feel humbled and touched. To be called friend and peer means more than I could ever express. That was all this father wants and more than he could imagine.

I’ve seen other parents and adult siblings of transgender teenagers use things I have written and apply them to better stand for their own children and celebrate them. Parents of trans and non binary kids have told other parents about specific blogs I have written. I have had private sessions with other parents through the blog as we not only connect, but better the lives of our kids. That was all this father wants.

Then there is all I didn’t want.

I didn’t want to have debates on a forum that my son, his classmates, his friends, and other parents of trans kids read full of comments from both religious and secular bigots who find it too difficult to accept children as they are without saying they are either suffering delusions or are abominations. I definitely did not want to have people think the civil rights of my son is up for some faux intellectual debate where they keep moving the goal posts and changing the standards to defend the indefensible.

At no point did I ever want to be doxxed and face discomfort at jobs when someone invariably stumbles across this column. I can easily state that I did not want to lose new friends made in the attempt to create intersectionality for not immediately understanding their demographic. ***In reference to this last sentence, I offer special thanks to everyone in the LGBTQIA community, the autism community, and Black Lives Matter for your patient and poignant corrections and education. I am truly beholden to you.***

There is something funny that happens when you go down the rabbit hole of the things you do not want. You get caught up into the drama. Immersed in the arguments with willfully ignorant christians, bigoted atheists, and social justice warriors that would rather shame you than educate you, I almost missed the concerts, proms, and triple word scores.

I do not want to win political debates or be the coolest ally in the world. There is no desire to be a big deal in the secular community. I just want an amazing kid that happens to be my kid to have the best possible life he can. His being transgender should not be a factor. People want to debate what bathroom he should use. These same people want to call gender dysphoria a mental illness or an unpardonable sin. Never mind the DSM-5, science, and reality prove this is not up for debate.

I did not want to get sucked up into the middle of the war started by TERFs who are a clear and present danger to trans girls AND boys in ways that would make Mike Pence jealous if he thought about it. Nor did I want to get into battles with leaders of mainline and progressive denominations like the United Methodist Church and the United Church of Christ. Despite my philosophical differences with Christianity in America, these are actually entities I am rooting for.

He’s a good kid. Smart, funny, intuitive, respectful, strong, and beautiful. He is not brave because he is trans. He is brave because he had to grow up faster than most teens due to a messed up world full of adults. I’m not a great father because I accept him. I’m a good dad because my dad wasn’t and I decided I was not going to be like him. I faced my demons and still do to this day.

There is no reason for anyone to deny my child and all the children like him equality, respect, opportunity and acceptance. It’s not his fault that people are so myopic as to define another human being by their gender identity, sexual orientation or race. That is all I did not want and will never want. I got lost in their drama and their hate and almost forgot why I was writing and why I was advocating.

I have not written much the last two months. I’ve been working a lot and when not working, I have been spending time with my family.

I don’t have much. I am grateful that my ex has resources I do not so he can have every opportunity he deserves in this life. What I lack in money and dignity I make up for with love and fight. There are a few principles and school administrators who do not like that fight. There are pacifists who do not like that fight either. I am not here for them. I am here for my kid.

This is the third  post I have written in the last week and the only one I will publish. This is what matters. It is why I write. To get those who do not understand to see my son and other kids like him through the eyes of love. I love my kid and I just want to see him grow up safe, be happy, be the best man he can be and make a difference.

That is all this father wants.

Because it is one of the few songs from the last album that my son, my fiancee’ and I both love and it kinda relates to what I yap about. 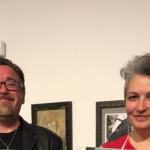 April 9, 2018
Parents Speaking Out: Things We Want You to Know
Next Post 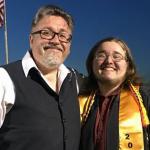 May 24, 2018 My Son Graduated and Did Not Have to Die Defending the 2nd Amendment
Recent Comments
0 | Leave a Comment
Browse Our Archives
get the latest from
TransParent Expedition
Sign up for our newsletter
POPULAR AT PATHEOS Nonreligious
1