My Son Graduated and Did Not Have to Die Defending the 2nd Amendment May 24, 2018 Patrick L Green

Last night my son graduated high school. In 2018 there have been 26 students who will never get this opportunity due to school shootings. They died defending the 2nd amendment. They did not intend to sacrifice their lives for the right to bear arms, but they did. Their parents will never experience the moment I did. They will never know this joy. The survivors of these shootings will have the absence of their classmate and their friend on their graduation day.

The same adults that have virtually zero sense of urgency of the rising death toll of children seem to have a very negative view of my son’s generation. They claim that every student gets a participation trophy. I was at my son’s awards ceremony the morning of his graduation. He won awards for high honors that allowed him to have 3 cords and a specially colored tassel. They were awards for hard work and achievement. A variety of students won awards and recognition for a great many things. Athletics, academics, leadership, public speaking ability, service to others, students going on to West Point, and other things. These are all the same things they recognized students for when I was in high school 30 years ago.

I have heard some adults say these awards and recognitions are not indicative of real life and this moment should not matter with all the pomp and circumstance. Imagine a reality where we continued to recognize each other for achievements in life besides succeeding at free market capitalism. Maybe it would be a more gentle and kind world. Maybe we would have greater self esteem and less fear.

There were some growing pains with the school properly recognizing his name. Slowly, he began to realize he was safe. His smile came back, his grades went up, he got involved in clubs and activities again. By the end he was in Advanced Placement Honors and president of his GSA. He was also very active in journalism, honors Spanish club, honors art. Further he has protested (which is far more patriotic than allowing children to die and forcing people to stand for the flag), gone to prom and had fun.

Every cord was earned. Each and every honors recognition was a testament to his strength, resilience, and bravery. The recognition of his friends and peers? So many of them helped create and foster an environment he could thrive in with acceptance, friendship, love, and mutual respect. Oh sure, there were some teachers and students who did not accept him, but unlike his prior school experience, that was not tolerated or welcome.

As school shootings became a regular event, I started to get scared for his life. When I was a minister, I officiated a few funerals/memorials for lives that ended too young. They were the hardest to do. There is an unimaginable pain in the eyes of parents and siblings of a child who dies too young.

Selfishly, my son’s graduation is a proud moment. He survived. Countless other transgender youth have taken their own lives because they were not supported and countless teens have been killed in school because we live in a nation where people have an unhealthy obsession and love of guns.

Too all the parents who have or will soon celebrate this lovely moment, congratulations. For any who may be reading this who have lost more than any parent should have to lose, I am so sorry and I promise that some of us are trying to do everything we can to change this. I am sorry we were too late and not enough people care.

Bad Evangelical theology hijacked by conservative politics have put children in danger for being LGBTQIA, black, muslim, female, and daring to go to school. I shudder to think that I was once a cog in that wheel of injustice and bloodshed.

May 15, 2018
All That This Father Wants and All I Didn't Want: Ramblings of a Dad
Next Post 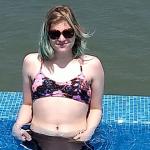 May 29, 2018 Metamorphosis and the Becoming Of Who You Are: Guest Columnist
Recent Comments
0 | Leave a Comment
Browse Our Archives
get the latest from
TransParent Expedition
Sign up for our newsletter
POPULAR AT PATHEOS Nonreligious
1