Otakon and the International Family of Cosplayers and Characters

Otakon and the International Family of Cosplayers and Characters August 22, 2018 Patrick L Green

In 2014 I took my son to his first Otakon. He was meeting some friends he had only known on the internet. For the first time ever he wore a name badge with his name on it. Dave. He was fully identifying as male with no shadows or hiding. He was completely himself while surrounded by cosplayers who did not care, and yet, they celebrated everything and everyone. The main entrance hall was full of cosplayers and people wearing t-shirts of their favorite Anime, Manga, or other comic character. I was not celebrating. I was a worried father.

When he met up with his friends, they were off and away to enjoy themselves and I became a stalker. I followed them from a distance for 11 hours. I saw nothing nefarious, dangerous or concerning. I saw 4 young people taking in wonder. They went to panels about anime and how to draw. They went to the Artist Alley section and basked in the wonder of original art. Then there were the cosplayers. They admired the work of cosplayers and had fun.

No one thinks they are strange. They are celebrated and for a few days. They get to be stars. They receive compliments, people ask if they can take their photos, and they even get to be part of group photo shoots or be professionally photographed if they wish.

My son belongs there too. Most of the days he is at Otakon he is not in cosplay, but he is having the time of his life laughing and enjoying life with the friends he has while making new friends.

By the last day of our first Otakon, I relaxed. I stopped stalking my son and his friends. I went to a few panels that interested me. Then I went to themed group photo sections and took pictures. I randomly asked people questions about their cosplay characters and what went into making or purchasing their outfits. It was fun. I was accepted as I was. I belonged.

Celebration of Japanese art creates belonging in a world full of borders and divisions. This community needs gowth, but for this moment I want to celebrate.

As I continue this series you will see some con celebrities I interviewed.

But this moment, I want to highlight a few cosplayers. These people were among tens of thousands of cosplayers and characters.

Patty and Jonathan are dressed as Present Mic and Eraserhead. I asked them why they picked those characters from Boku no Hero Academia. Patty answered, “They fit our personalities perfectly!”

As a couple they have been going to cons for about four years now. Most of the ones they go to are in the tri state area (New York, New Jersey and Connecticut). They have been at New York Comicon at the Javits Center, AnimeNEXT in Atlantic City, Video Game Con at the Meadowlands and local ones like Garden State Comic Fest.

This is, however, their first time at Otakon and Washington DC is the furthest from home they have gone to attend a con.

What did they think of it?

Jonathan said, “It was great! Always stuff to do. The Final Fantasy concert was amazing!”

Patty interjected, “Jonathan got to ask Nobuo Uematsu a question at a panel.”

Jonathan piped in, “He is the composer of Final Fantasy. My only complaint was it was so big and hard to get around with limited mobility.We could get around, we just had to figure it out. It’s not on them (Otakon).”

I asked them one last question. Do your friends know that you cosplay?

Patty said, “All my friends know, I’ve made a lot of friends online in cosplay and fan groups. But not my mom. I don’t think my mom would have a negative connotation, she just does not understand Anime.”

Dorian was standing next to a women in cosplay as well. I asked if I could take their picture and ask a few questions. It was the end of the day and she was tired and said no. I thanked her. He agreed and I thanked him. There is so much about cosplay that is wonderful. One negative aspect is that sometimes people do not respect the word “no” or “no thank you”. They take pictures without consent or say things untowards…or worse. I will not say it is a shame or I wish she had. She said no. End of story.

I asked Dorian what he was dressed as. He replied, “Thor” then a pause, “Unworthy Thor!”

When asked why he chose unworthy Thor, he smiled and answered, “It gives me a reason to be shirtless. I’ve come to like Thor a lot recently, especially over the last few comic runs. Especially with him being unworthy. The story of him having to be destroyed and give up his hammer and all that stuff, it was just a really beautiful archive. And after Jane Foster, Thor stopped being Thor and he came back and it was long. But if you stuck with it? It was really good. And I became fond of Jane Foster’s Thor.”

How did he get started in cosplay? He had an answer for that. “I started doing it officially when I was working with kids doing birthday parties as an entertainer. I thought, wouldn’t it  be cool if we did Spider-Man for parties? So I got my own suit and and the next thing you know we started our first con. That was five years ago?”

He is a professional wrestler so he travels a lot. Wrestling is where most of his expenses goes to. He tries to go to as many cons as he can, but usually makes one or two a year.

This is his first Otakon. When asked what he thought about it it, “I liked the Funimation Dragonball Z section! It is everything to me. It has things I want to have in my own home. And the statue of Shenron was absolutely beautiful. People were nice here. It was really cool how they network with the other cons. It was also great seeing a lot of good friends here.”

I asked him if his friends and his family know he does cosplay. He said absolutely they do. He gestured towards the woman who did not want to be photographed and told me they are engaged to be married, though they have not set a date. 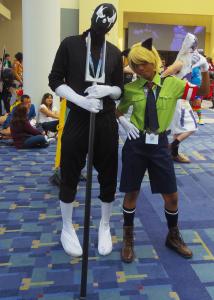 The final hallway interview I did was with a young lady named Kitora. She told me she was dressed as Schrödinger from Hellsing Ultimate. When asked why they chose him, they said, “Because I really like his character. He is a happy go lucky character and I really like his personality. It is a lot like me.”

When asked about the making of the costume, Kitora told me most of it was bought online but made alterations and a few customizations. Otakon is the con they mainly attend, but they did recently go to CostumeCon and enjoyed it.

When I asked if family and friends knew about the cosplay, Kitora lit up and pointed to their brother.

He introduced himself as Ascendica and he was in cosplay as Grendel. He cosplays as many different characters, but Grendel is his favorite Manga character. I asked him if their family and friends knew they cosplayed. He said, “All of our family and friends know we cosplay and they support us. But yeah. A lot of people think it is weird. They think you are a loser or too old to be into it or whatever.”

People think being trans is weird. They think LGBTQIA+ people are losers. Less accepting adults think transgender teens will grow out of a phase.  In every race, culture and nationality transgender people are there. Sometimes family members and family know and support, other times they do not.

For one beautiful weekend I saw people dressed in cosplay and others dressed in “normal” clothes. In the environment of Otakon there was celebration of the differences and the infinite variety. No wonder Otakon was my son’s first space to be fully himself.

I remember, as a parent, the relief I had in 2014 when I nervously went to the registration desk and told the young woman behind the counter that my son uses the name Dave and though it is not his legal name, could he use it on the badge. Without hesitation and with a smile she gave me a tag that said, ‘Dave’.

I cannot express what that felt like. I hope that these little snippets gave you a glimpse to the beauty, the passion and the diversity of the cosplayers I met at Otakon. They and their community do organically what even the progressive church cannot seem to accomplish without herculean effort.

On my first article in this column I told the transgender community that I am not trans and I know it. If I get something wrong, I will listen, amend, and correct. Just tell me. For my son, being trans is a part of who he is. His OC’s, Manga art and other interests that started with Sonic, is something he loves. I am older and more of the Marvel, DC, Star Wars, D&D type. I respect your hobby, your passion, and your inspiration. So if I screw something up, I want to learn because you have taught me a lot. 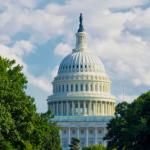 August 16, 2018
Washington D.C. and the Love that Trumped Trump's Hateful Fans!
Next Post 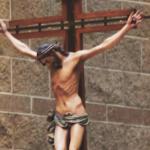