Flags, Chick-fil-A and the UMC: Thoughts By LGBTQ Teenagers

“Chick-fil-A has more integrity than the UMC,” Tanner exclaimed, “They’re both friendly to me and they’ll take my money. But Chick-fil-A doesn’t wave the pride flag  saying they’re an ally knowing that I’m not equal in their corporation’s eyes. UMC churches wave that flag as a f***ing marketing tool to my death!”

The coffeehouse fell silent as Tanner finished their statement. I was sitting at a table with 3 LGBTQ teens a few months ago to talk about the UMC’s Reconciling Ministries program in comparison to other fully accepting and affirming denominations. For the purpose of the article I will call them Tanner, Dash, and Quintessa.

“What do the rest of you think?” I asked.

Quintessa simply said, “Christians have a word for that, wolf in sheep’s clothing.”

“Mister Green,” started Tanner,” that flag is more than just fun colors. Harvey Milk gave Gilbert Baker the challenge to make a new symbol. All the community had back then was the pink triangle. It represented the death of gays by Nazi’s. Milk wanted something for a new era. Baker was in the Army before he was out. He knew the power of a flag and the symbols behind it. He knew the importance. After Milk was killed, demand for the flag grew.”

“For real? That makes me even more proud of the flag!” said Quintessa.

“Yeah,” said Tanner,” this is part of our history. This is our flag. It is as important to our history as Stonewall and it’s tied to Milk!”

“You mentioned the power of a flag. Tell me more about that, Tanner.”

“Outside of war, the first time we really see flags used for something other than war is in the beginning of the maritime world. A ship would have a flag of their country of origin or something like the Union Jack symbolizing multiple kings working together. All the people on a ship under that flag represented that group, served it’s king, and had the rights of citizenship however limited it was at the time.”

“My mom moved out of Georgia pretty much when I came out,” Quintessa said, “After Trump got elected that Confederate flag took on a whole new meaning.”

“Why did you guys move?” asked Dash.

“When you read about who got killed that was trans, it almost always starts with a black trans woman was killed. Target on my back is a little smaller here, but I still got a target. And if I see some kinda rainbow flag out there, it better promise safety.”

“With the UMC is doesn’t.” Dash said,”What Tanner says about Chick-fil-A is true. You know where the corporation stands. The owner of your local one can be the nicest and most supportive person in the world. After Pulse, a local one gave free sandwiches and juice to people waiting in line to give blood and learn about loved ones.”

Tanner joined in ” Exactly! It was a nice thing to do, but the corporation is still giving money to groups that want to prevent my rights and even try to change me. The UMC is worse. You raise a flag in a place where I cannot be married, where I cannot be a leader, and where people in churches in Africa support the legal murder of my people. A part of every dollar I spend in a chicken place goes against my civil rights. A part of every dollar I spend in a church goes against my life and they dare to wave the flag?”

“They ain’t inviting us to safety and equality, they are inviting us to their battle.” Quintessa said. “That goes against the flag. You wave that flag when we are safe to enter. We ain’t. Anyone else read the Reconciling stuff Mister Green gave us?”

Tanner and Dash both nodded.

“Either of you Christians?”

Tanner and Dash both shook their heads.

“I am,” Quintessa said. “My mom and I are Episcopal. I don’t know why the UMC didn’t just go to them or the UCC. They wrote something worse than cis het young adult trans fiction.”

“I know queer people were part of writing it,” Tanner said,” But it reads like a bunch of middle aged uneducated allies wrote it. And Quin is right. There’s other models, why do you have to write your own from scratch and brand it?”

“I get what they are trying to do with the Pride flag,” said Dash,” but the thoughtless allies are the most dangerous ones. They also get the most sensitive when you criticize them. Like we should be thankful for their mistakes that hurt us. ”

“I’m never going into a church unless I have to go to a wedding or funeral with my parents. If they think we’re going to go to their churches because they finally entered the 21st century then they are doing it wrong. It feels like they are doing this and inviting us to their churches as if the two are tied together. That’s arrogant. You change the way you view us because it is the right thing to do; not to get us as customers. Our flag is not your marketing.”

Their flag is not for our marketing. I think that is a good space to end on.

I am receiving a lot of push back from some United Methodists (both progressive and traditional) that include unkind things said about LGBT teenagers!

For context. I gave them copies of Reconciling requirement, ONA of the UCC and Episcopal statutes on LGBTQIA+

They were also given all relevant documents to the conclusions of the 2019 Special Session of the General Conference.

Finally, this is a portion of a more than 2 hour conversation that started on skype and ended up at a coffeehouse.

A robust discussion started in the Progressive Methodists Facebook Page over this article. Parents of trans children, LGTBQ adults, allies with questions were all involved. Some were unhappy and accusatory, but most were polite and great conversation was being had. Progress of understanding was being made. Then, without warning, without explanation, the entire thread was deleted. All future posts I attempted to make, even unrelated were held and blocked never to be seen.

In the act of blocking not only my article and discussion regarding it, but also in blocking any future posts I tried to make no matter how innocuous, the Progressive Methodists not only proved these brave and beautiful teenagers correct, but showed even darker undertones to what lay beneath the flag. These were the comments that won over love and honest discussion.

-Your opinion does not matter if you are not Methodist
-To raise a concern is to sow discord
-You are welcome, your input is not
-It is okay to call yourself progressive and insult at risk LGBTQ teenagers. 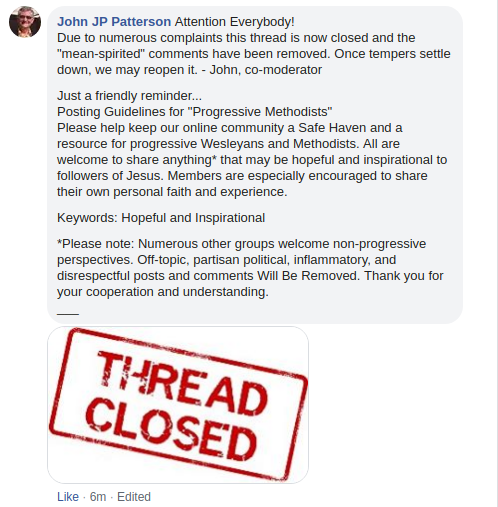 My thread on the Progressive Methodists Page is back up mysteriously. It has this attached and as I view it, the comments have been adjusted to a very curious manner. I did not take screeenshots so it is hard to say what had been deleted, but the narrativr is different and some wheat was tossed out with their perceived chaff.

Non Progressive Perspectives: This was a very progressive perspective. It was just not Progressive Methodist and waving the banner high of how great and swell everyone is. Nor was it vitriolic.

Now, as to the reminders.

Half their posts violate these standards, they just never made anyone uncomfortable or angry at children.

Yeah. I am emotional about this because the very next posts shows the Progressive Push back Section in this article. I am such a meanie.

In a non progressive international Methodist group I was welcomed in to discuss this and it was one of the most lovely and beautiful and honest conversations I have ever had with any Methodist group online….ever. 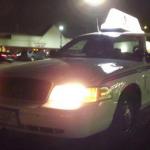 April 22, 2019
Legend of Chrissy: The Homeless Transgender Prostitute
Next Post 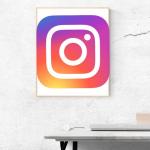