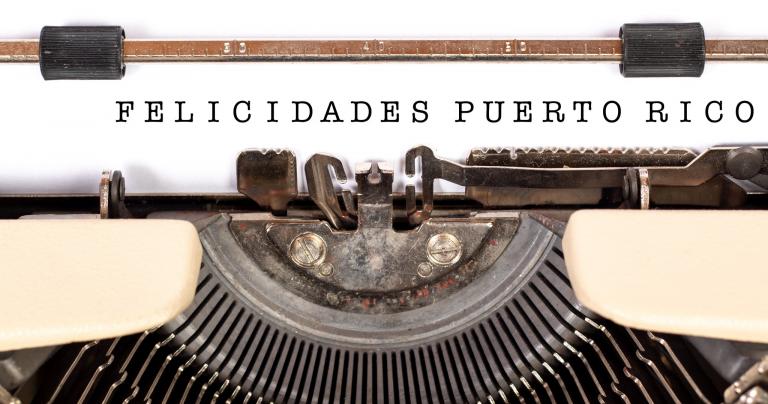 After 12 days of protests en masse in San Juan, Puerto Rico, Governor Ricardo Rosselló announced his resignation effective August 2nd. Despite the tens of thousands of protesters being largely peaceful, the authorities still used tear gas, rubber bullets and flash grenades on citizens. In 12 days the people of Puerto Rico reminded their fellow American citizens in 50 states, Washington DC, Guam, Northern Mariana Islands, and the U.S. Virgin Islands of the power of “we the people.”

Why Were Puerto Rican Citizens Angry With The Governor?

Many have been upset for some time now of the slow recovery in the wake of Hurricane Maria in 2017. Despite President Trump’s Twitter tantrum in which he claims $92 billion has been sent to Puerto Rico, congress actually approved $42.5 billion. To date, less than $14 billion has been sent to the island. FEMA housing has largely ended. Tens of thousands of homes have blue tarps where roofs used to be. Electricity is still very undependable.

Since January, fear has increased across the island with record high violent crime and murders in broad daylight due to increasing poverty. This is partly due to “high levels of absenteeism” by police officers since Maria. This has been brought up numerous times to the U.S. Department of Homeland Security and the U.S. Justice department with backing from the FBI that now lists Puerto Rico as having one of the highest crime rates in the U.S. The governor promised to address the rising violence and anxiety ridden residents with swift and strong action that has never taken place.

There has also been mismanagement of relief funds and goods. Needed food spoiled before it could get to the people who needed it desperately. Water sat in warehouses while people suffered dehydration.

The Text Messages That Broke the Digital Dam

In mid July, Puerto Rico’s Center for Investigative Journalism broke the story. The governor and 11 aids were revealed to have 889 pages of texts containing illegal (at least 4 felonies and 1 misdemeanor), immoral, sexist, body shaming and anti LGBTQ+ content. These text messages that included insults to entertainer Ricky Martin (who was present at the protests), the mayor of San Juan, journalists and victims of hurricane Maria was the breaking point for the people. Due to the efforts of the Pro-Publica of Puerto Rico, the CPI journalists were able to show the people what their officials really think and do in their own words.

Almost immediately citizens protested in San Juan demanding resignations from the governor and his aids.

In short time several of the top aids for Puerto Rico’s Governor resigned. The demands for Ricardo Rosselló to resign were met with a public statement by the governor. He stated that he would not run for another term, but he would not resign. The pressure increased, the protests grew swiftly from thousands to tens of thousands. The reduced police force could not stop the protesters. Negative commentary from online groups like PR Strong could not deter the protests. The people spoke. Even President Trump, in an act of irony, claimed Rosselló was a horrible governor and  told him to resign.

At around midnight on Wednesday, July 24th, Governor Rosselló resigned.

Puerto Rico’s Lessons to All Americans 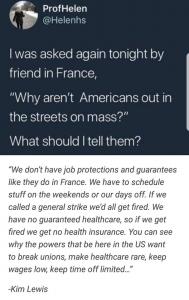 I have seen this meme floating about social media for months by my fellow liberal and progressive friends. It reads:

I was asked again tonight by a friend in France,

“Why aren’t Americans out in the streets [en masse]?”

What should I tell them?

“We don’t have job protections and guarantees like they do in France. We have to schedule stuff on the weekends or our days off. If we called a general strike we’d all get fired. We have no guaranteed healthcare, so if we get fired we have no health insurance. You can see why the powers that be here in the US want to break unions, make healthcare rare, keep wages low, keep time off limited.”

Everything listed here as an excuse to not protest are the exact reasons we need to protest!

Almost 45% of Puerto Rico lives below the poverty line. From 1976 to 2019 the average unemployment rate has been just below 15%. Over 60% of Puerto Rico is on medicaid and those funds are swiftly depleting. Due to federal cuts, the people without any access to healthcare is far higher by percentage than in the rest of the U.S. Their executive branch is corrupt. Yet they rose. They protested. In the wake of rampant unemployment, no job security, no access to quality healthcare, rising crime and poverty they rose up. In 11 days they made history. The people still in office and the new executive administration are now on notice that the free press and the people of Puerto Rico will hold them accountable.

Children have died in concentration camps in our borders. LGBTQ+ youth lost civil rights under this administration. The president has tried to suppress the free press. The president has profiled people as less based on their religion, nationality and skin color. ICE violates due process and the Constitution constantly. Our president has incited violent threats after making racist statements about elected representatives who disagree with him. Laws are being proposed to suppress the right to protest. Voter suppression is occurring.

Are we foolish enough to believe these things are going to fix themselves?

When will we stop using the reasons we should rise up as our excuses not to?

Like This Column? Please Support Me and My Kid! 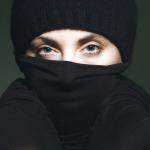 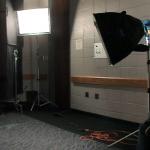 July 29, 2019 Joshua Harris' Creation And What We Need to Consider
Recent Comments
0 | Leave a Comment
Browse Our Archives
get the latest from
TransParent Expedition
Sign up for our newsletter
POPULAR AT PATHEOS Nonreligious
1