Trump Vs Camacho: Which President Can Handle A Crisis?

Trump Vs Camacho: Which President Can Handle A Crisis? April 26, 2020 Patrick L Green 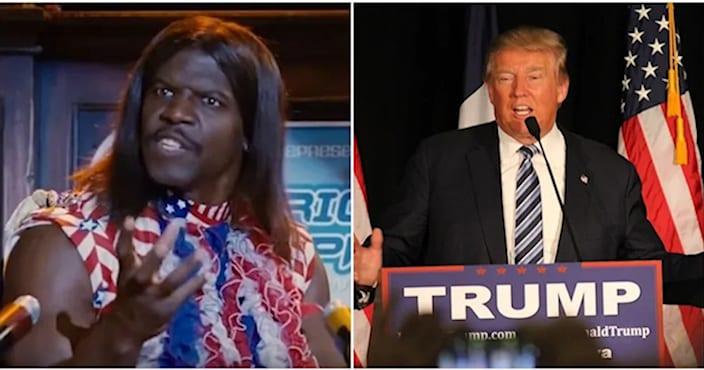 Who could handle a crisis in this nation better? President Trump or President Camacho? In one corner, we have the very real 45th president of the United States of America, President Donald John Trump. In the other, we have the fictitious future president of 2505, Dwayne Elizondo Mountain Dew Herbert Camacho. Let’s compare them.

We already know what kind of world Trump is administrating in.

Finding The Right Person For the Job

Trump has not only assembled the worst cabinet in history, he has a nasty habit of terminating the few good people he has. He even does this during a pandemic. He seems to be intimidated by people who may be smarter than him while he pontificates about using disinfectants as an injectable on humans.

Camacho knows that he does not know the solutions to the problems facing his nation. He seeks out the smartest man in the world and asks him to join the cabinet as Secretary of the Interior.

President Camacho brought the smartest man in the world before the House of Representin’. He respects the process. Trump takes shortcuts. Trumps has filled high level jobs without Senate confirmation votes.

When Presenting Joe to the people, there are accusations that his previous initiatives have failed. Camacho makes no excuses and takes empathy with the crowd’s anger and frustration. Camacho admits “Sh**’s bad right now!” He specifies the dustbowl, the economy and the food shortage as real problems. Camacho also reiterates that he understands emotions are high. He then goes on to outline a clear 3 point plan with a timeline.

Trump? Trump makes everything about Trump. He shows neither empathy or sympathy for anyone. He denies not only the real existence of problems, but denies responsibility for mistakes. His plans are vague and he denies he ever made them if they do not pan out. Trump does all this during a pandemic.

Secretary of the Interior, Not Sure (Joe-see the movie) realizes swiftly the problem with the crops is that the crops are treated with a sports energy drink called Brawndo. Brawndo has electrolytes. Electrolytes contain salts that are killing the top soil.

Immediately, water replaces Brawndo on the crops. President Camacho’s deadline passes and Brawndo’s stock goes to zero leading to mass layoffs of the largest company in the nation. An already hurting economy just took a turn for the worse.

Camacho calls an emergency cabinet meeting. It is decided Joe is removed from office, faces trial, and is sentenced to a very deadly rehabilitation. While the rehabilitation is underway, Joe’s lawyer and girlfriend document evidence that the plan of using water is working.

Camacho sees the science and immediately commutes the sentence. Camacho then pardons Joe and makes him Vice President.

Trump? Simply put. Trump ignores science at our own peril. Trump has made it clear the corporations matter more than the citizens.

The End Of Administrations

President Camacho realizes that Joe would make a better president. He endorses and celebrates the victory of Joe as President of the United States in the next election. I do not suspect Trump will exit gracefully from office.

Camacho is the Clear Winner Over Trump

Camacho, is a leader in a world that has/will devolve(d) into the lowest common denominator would likely do better in an international crisis like we are going through now. Trump is the best we could do in 2016. Idiocracy tried to envision a sad distant future based on the course we were on in 2005. The sad truth is, that dystopian future has more hope than our current reality. That hinges on our leader. Leadership matters and we lack it.

A Message From the Future

And now, I close out with a message from former future President Camacho about universal income…..kind of. He’s not perfect, but better than what we have. (Speaking of the future, we will soon compare Trump to Jim Jones-stay tuned!)

Special Thanks to Special Readers

Earlier today, I was invited to a Zoom session. I did not know who would be on it. It turned out to be some special readers who feel that I matter and wanted to be sure I was all right. Especially with my recent suicide attempt.

It was a Mama Bear and transgender young adults who I did not know adopted me as their dad. They also reminded me I do not have to try as hard, I just need to be me. So this is me. A storyteller with a sardonic nature. More to come.

Thank you for being a light in my darkness. Stay healthy, stay safe and help me if you can.

February 23, 2020
Voting and How You Can Win With No Apologies: Why Your Vote Matters!
Next Post

July 9, 2020 They Call Me Dad and So Can You: An Open Letter to the Trans Kids!
Recent Comments
0 | Leave a Comment
Browse Our Archives
get the latest from
TransParent Expedition
Sign up for our newsletter
POPULAR AT PATHEOS Nonreligious
1