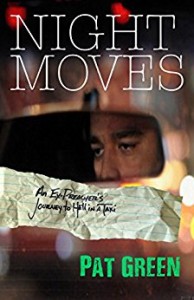 Night Moves: An Ex-Preacher’s Journey To Hell In A Taxi

Pat Green experienced rejection from his church because of his stand on marriage equality, was threatened by the very people he ministered to on the dark streets of Chicago, discovered that his daughter identified as a lesbian, went through a bitter divorce, abandoned by his church…and ended up on the streets – alone, broke, and unemployable. The only job he could get was as a taxi driver…on the night shift.

It was like driving through a sick and twisted contemporary version of Dante’s “Divine Inferno.” He encountered face-to-face the most broken, violent, dangerous, deranged, and drunken people at the darkest hour of their lives.

Yet…incredibly…he encountered something else, as well. Something he did not expect, did not hope for, and (at first) did not trust. But it happened over and over again…and his journey through hell became an experience of love and light that radically changed his life…and the lives of the riders in his cab.

This is Pat’s story…and their story. This is how the night moves.