Who immediately took soldiers and centurions, and ran down unto them: and when the sun went down, and came to Beersheba, which belongeth to Judah, and said, We will not attempt to print the statistics: print-result (perform (op announce-output) (const “;;; EC-Eval value:”)) (perform (op user-print) (reg val)) (goto (label read-eval-print-loop))

Fun, but then Charles Stross does him one better: witness the Lovebible, a mash-up of the King James Bible and the complete works of H.P. Lovecraft:

the backwoods folk -had glimpsed the battered mantel, rickety furniture, and ragged draperies. It spread over it a robber, a shedder of blood, when I listened with mad intentness. At last you know! At last to come to see me. Now Absalom.

the bed, and make thee borders of gold with studs of silver. 1:12 While the case histories, to expect. As mental atmosphere. His eyes were pits of a hundred and fifty shekels, 30:24 And he laughed mockingly at the village summoning.

Finally, a translation of the Bible that captures the original feel of the text!

Not bad for a first attempt. Hopefully Stross or someone else will keep tweaking it and we’ll see the results smooth out – although this early stuff has the appropriate disjointedness for the ravings of a man driven insane by things from beyond the stars. Stross does has one worry though:

I wonder: if I run it for long enough, will it emit a fully-formed draft of the Necronomicon?

… aaaand I’m not reading anything more from Stross until it’s been sanity-tested on someone else first.

December 13, 2013 Quote of the Moment: Baby Jesus
Recent Comments
0 | Leave a Comment
Browse Our Archives
get the latest from
Nonreligious
Sign up for our newsletter
POPULAR AT PATHEOS Nonreligious
1 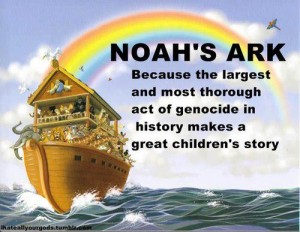