So Long, And Thanks For All The Memories (From Dan)

So Long, And Thanks For All The Memories (From Dan) April 23, 2014 Daniel Florien

2008 was a difficult year. My wife and I lived in a trailer on my parent’s property because we couldn’t sell our out-of-state house. I lost a lot of money in the real estate & stock market crash. My wife was severely depressed because she couldn’t get pregnant. I lost my faith in Christianity and God and was learning what it meant to be a “non-believer” and “apostate.”

Did I mention I lived in a trailer? When it rained, brown water leaked on everything. All my possessions moved when you took a step. The toilet and shower didn’t work, so we had to use my parents’.

At least I had a job. I worked at a Christian ministry… but I was an atheist. I couldn’t talk about my change of heart because I’d be fired if they learned I joined the dark side.

But I needed to work through my unbelief. For me, that meant discussing things with friends, writing things down, and debating. How could I do that if I couldn’t tell anyone?

That’s when I came up with the idea of a pseudonymous blog. In April 2008, I bought a domain, went to WordPress.com, named it “Unreasonable Faith” and started blogging.

Apr 20, 2008 (from my journal): “Today I skipped church and started a new blog called ‘Unreasonable Faith.’ It took me a while to come up with a decent name, as usual. It’s a riff off of William Lane Craig’s ‘Reasonable Faith’ but I like the sound of it. I still have yet to come up with a good pen name, though. Harder than I thought.”

The first month I picked up some readers, but it was pretty quiet in the comments.

Everything changed on May 29, 2008. I wrote an article called “A Guide to Christian Clichés and Phrases.” I emailed it to Hemant Mehta & PZ Myers and both posted it to their blogs. The traffic rushed in. I was ecstatic.

Over a hundred thousand people came and the site gathered a core audience of smart, vocal followers — Vorjack, LRA, Elemenope, Ty, Custador, McBloggenstein, Teleprompter (and many others… please forgive me). It was incredibly rewarding and enjoyable, especially participating in the discussion posts created.

It wasn’t until the beginning of June that I chose a pen name: Daniel Florien. I had a friend draw up an illustration and my identity was set.

The success of that article, and then others, brought success to the blog. In its best month, UF had 1 million views. 20/20 asked me to be a guest. Conference speaking invitations came. Publishers wondered if I was interested in writing books. But most of these required me to reveal my identity — or do those weird black-out things that make you seem like a serial killer. So I graciously turned down their requests.

It’s weird when your pseudonym is more popular than yourself. My closest friends knew about Dan but it’s not something I could talk about openly. Dan is a fictional character and I felt a freedom to explore things from his perspective and it wasn’t something I wanted associated with my more real, professional life. But I’ll be honest — it sort of bugged me that a fiction of mine was more popular than me. So I reduced my UF posting and began publishing under my own name elsewhere.

During this time, a friend and I built up another blog to over 10 million views a month. I started a personal blog and in a couple months had over a million views. I published some essays. I started and sold a couple businesses… and then I went through a divorce.

The divorce pulled me down like an anchor. I was unprepared for the anxiety and depression it would bring. I was already neglecting UF, but when that happened, I stopped posting completely. I had thousands of unread emails in my UF inbox. Readers complained about my neglect, but writing an article seemed an unimaginable amount of effort. And anyway, I was far too busy eating doritos and drinking. To try and quell the anxiety, I stopped checking my UF email and stopped visiting the site completely.

Through all this Vorjack (which is also a pseudonym… obviously) posted and kept the blog going, and for that I am very thankful. Vorjack, you are amazing. Thank you. And good luck in all your future ventures. And through the history of the site, moderators like Custador, Elemenope, and Ty kept the forums running and spam-free. Thanks for all those hours making the site a better and more friendly place.

It’s been a few years now since I’ve regularly contributed to UF, but now that Vorjack is saying goodbye I thought it would be good for me to say a formal goodbye, too.

This blog changed my life. It taught me how to build something without previous connections. It taught me the value of community. Writing through my deconversion was therapeutic and helped solidify a new understanding of the world. I learned the unfortunate reality that a five minute image post usually produces more traffic than an essay you spent three hours writing. I received death threats and hate mail. Hundreds of emails tried to convert me. It taught me how to beg for links and be a traffic whore. I learned you had to ban trolls. It challenged and refined my thinking.

But above all, the best part of the blog was the readers. I am so thankful for all of you that gave me and Vorjack a few minutes of your day. Thank you.

My life is continues to change. One of my companies is now VC-funded and has Fortune 500 customers. I have a girlfriend whom I love, and we’re starting a life together. Atheism and skepticism are now just a part of me, not things I feel compelled to specifically write about often. I’m working on some fiction pieces and I’ve published some essays.

Above all, I’m happy.

I have lots of exciting plans for the future, but unfortunately UF isn’t a part of them. It was an important part of my life, but eventually all things come to an end.

So long, and thanks for all the memories.

April 23, 2014
Recent Comments
0 | Leave a Comment
Browse Our Archives
get the latest from
Nonreligious
Sign up for our newsletter
POPULAR AT PATHEOS Nonreligious
1 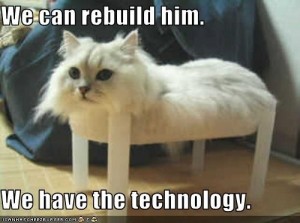