Owen Strachan and the Guardians of the Evangelical Galaxy

Last week, Owen Strachan wrote a post in which he wrung his hands over the announcement by two evangelical mega-church pastors that their churches would henceforth take an inclusive position on the GLBT issue. Owen is a good writer and wields a prickly pen. He can come off as calm and measured while assuring people that they are tools of Satan and are going straight to Hell unless they repent in sackcloth and ashes. Providing the watching world a direct counter-example to recent news reports about Southern Baptists “softening their stance” on the GLBT issue, Owen makes no bones about where he stands: when pastors and churches open their arms in an inclusive and welcoming stance, they have cracked open the doors to the gates of hell.

Owen is also convinced that a pastor making an announcement to one’s church regarding the conclusion to which he has arrived on the most contentious issue facing the evangelical church today (and suggesting that one might eventually write a memoir about that difficult process) is a blatant manifestation of “fresh heights of self-congratulation.” And this only further confirms, the reader is led to believe, that this pastor’s path to Hell has been flung wide open by his own willful hands.

Owen is deeply concerned that evangelical Christianity is filled with “boys” rather than “men.” This sounds a lot like the “pussified culture” which caused Mark Driscoll such existential angst. As his post (and the hang-wringing) wears on, he picks up the “manly” intensity. His clarion call reminds me a bit of that great speech in Gladiator–or maybe it was Braveheart:

Are there any in the new Israel, the church, who will honor God? Are the pastors of God’s people boys, and not men? Will we defend the righteousness of God when Satan assails it? Or will we fall silent, grow fearful, and drown out our proclamation of the truth in a series of jokes, qualifications, and selective put-downs of David-like Christians?

But there are many, many, many other churches that will not. They will not bend the knee to Goliath. They will not submit to the yoke of the Philistines. They have fire in their blood, and Spirit-given courage in their hearts. They will defend the honor of God. They will lovingly preach the gospel of grace to sinners just like them. To the extent that leaders like this serve God’s people, the church created and powered by God will endure. To the extent that church members tolerate this kind of shameless cowardice, the church will suffer. Praise God that many one-time GracePointe members have recognized the path of destruction this assembly is traveling, and have left it.

This is stirring speech–for those who share Owen’s epistemic certainty and theological convictions. This speech will elicit all manner of “Amens” from them.

I know this, because I was once deeply involved in the same fundamentalist evangelical culture in which Owen is deeply entrenched. It is indeed fertile ground for epistemic certainty and an antagonistic culture war mentality. That antagonism can be softened by hip appreciation for current cultural artifacts and the occasional craft-beer consumption, but there is no mistaking its presence. I distinctly remember a prominent Southern Baptist evangelist referring to “Ellen DeGenerate” in his chapel address at the SBC seminary I attended. The jab elicited a lot of laughs, though there were some of us who were saddened by the evidence of hate in this man who was supposed to display the love of Christ–and saddened even more that the response was gleeful agreement rather than vigorous protest.

I doubt that Owen would make or affirm such a vile statement. And while his speech in his blog post smacks of self-righteous aggrandizement and is belittling of his opponents (“boys” rather than “men,” “cowards” rather than “courageous,” etc.), we are all probably different in person than our public persona suggests we are. I believe Owen is deeply convinced that his perspective is “the” right one and that he is sincerely trying to steer people away from the path of destruction. He–and many like Owen–are convinced that they are called to be protectors of “orthodoxy,” border police of morality, and most certainly Guardians of the Evangelical Galaxy. They have the “right” hermeneutic, they have “tradition” on their side, and God has called them into the fight against all manner of creeping and crawling evils.

Readers familiar with Terror Management Theory will know that there is a good bit of empirical evidence that shows that “worldview defensiveness” is a typical response to perceived threats. When people sense the presence of otherness and difference, thus encountering challenges to their worldview (and theology), they often retract into a neurotic defensiveness which can take the form also of aggressive attacks against the Other and the new and the different. I suspect when a worldview is challenged from within (when people reject views considered sacred by the in-group), the aggression can be even more vicious. Plurality creates a hotbed of worldview defensiveness and nowhere is this more evident than in religion and theology. The kind of fundamentalism we see from theologians like Owen is, in my view, a prime example of worldview defensiveness in the face of perceived challenges to the homogeneity (and self-assured nature) of their position. Strachan writes that this pastor’s changed perspective on the GLBT issue “doesn’t cause true believers any trepidation.” I think otherwise. Strachan’s whole post is, to my mind, an example of the trepidation manifested in world-view defensiveness and that results in a Gladiator speech to “wake up” the culture-war army, get their “blood-pumping,” as he puts it, so they’ll fight the battle against sin and false believers (“boys”) who open the gates to Hell. Guardians of the Evangelical Galaxy, indeed!

Who is really doing the “self-congratulating,” by the way?

During my tenure at Bethel Seminary, I had two distinct (but amazingly similar) experiences with aggressively fundamentalist students. I regularly assigned in my theology classes readings from feminist, liberationist, and other “contextual” theologians. In both of these different cases, the students met with me privately to express their concerns with the readings. As I pressed into their concerns, the source of it was the same in both cases: they were afraid. They admitted that encountering these different perspectives and divergent (from their own) interpretations of Scripture made them fearful that their own world-view might be wrong. They wanted to read more theologians who would confirm their perspectives. They wanted more “Amens.” But their acknowledged fear actually allowed me to have more empathy for them–even though I wished they would embrace a more humble approach.

In my personal case, I have mostly left evangelicalism behind (I will write more about this another time). But for the sake of the health of evangelical Christianity and for the witness of the larger Church to the world, we need fewer self-appointed Guardians of the Evangelical Galaxy and more theologians and leaders willing to step into the more radical, bold (and yes, more courageous, in my view), way of perfect love–driving out fear. 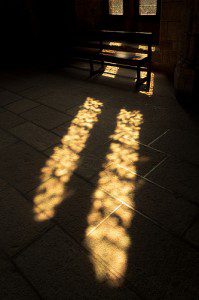