What is a “Putsch”? Scalia’s Dissent Just Taught Me a New Word

So while everybody else is writing high-minded reflections about the Supreme Court decision to legalize gay marriage nationwide–and while they are either exuberant with celebration or despondent with angst about the downfall of American society–I found myself on Google looking up the word “Putsch.” 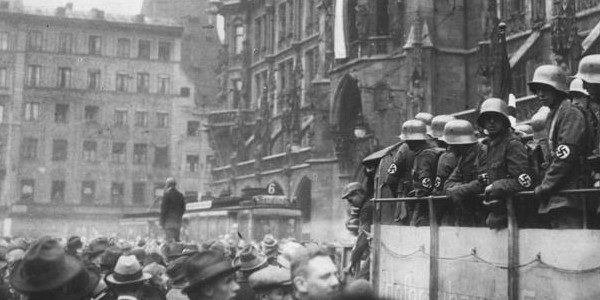 As a lover of words (one of the highlights of my life was studying up for the GRE verbal), I was intrigued.

Justice Antonin Scalia included the word in his curmudgeonly dissent to the majority option. Here is the relevant section of his rant, courtesy of the Huffington Post:

Webster’s online gives a short a sweet definition of a Putsch: “a secretly plotted and suddenly executed attempt to overthrow a government.”

The most famous military/political Putsch in modern history is known as the “Beer Hall Putsch” (also known as the “Munich Putsch”). Of course Scalia is talking about a legal Putsch, and is using the word analogically. But the story of the Beer Hall Putsch–via the Holocaust Encyclopedia–is interesting.

On November 8–9, 1923, Adolf Hitler and the Nazi Party led a coalition group in an attempted coup d’état which came to be known as the Beer Hall Putsch. They began at the Bürgerbräu Keller in the Bavarian city of Munich, aiming to seize control of the state government, march on Berlin, and overthrow the German federal government. In its place, they sought to establish a new government to oversee the creation of a unified Greater German Reich where citizenship would be based on race. Although the putsch failed—and Bavarian authorities were able to prosecute nine participants, including Hitler—the leaders ultimately redefined it as a heroic effort to save the nation and integrated it into the mythos of Hitler and the Nazis’ rise to power.

But it’s interesting to note that the Beer Hall Putsch was an attempt by Hitler and the Nazis’ to “establish a new government…where citizenship would be based on race.” In other words, a government that would ensure the limitation of freedom to a select group or groups, and to systemically and legally marginalize others (and of course, much, much worse as the story unfolded).

Now look, I’m not comparing Scalia here to Hitler and the Nazis–and I hope this isn’t an instance of Godwin’s Law–but hey, he’s the one who invoked the “Putsch” in the first place. Granted, he used “Putsch” analogically, and in reference to a legal decision, but it’s interesting to compare the implications of today’s Supreme Court ruling in favor of marriage equality for all persons with the infamous Beer Hall Putsch, which intended to severely limit equality and to diminish human rights.

Many are rejoicing today because, as a result of the majority opinion, liberty has spread to more people in our country–while not reducing the freedom of anyone else (my heterosexual marriage is still legal, so far as I know). That doesn’t sound like a Putsch to me.

June 24, 2015
Why the "Billy Graham Rule" Reminds me of the Tim Hunt Proposal
Next Post