Kierkegaard: “I Believe that We Will All Be Saved”

Kierkegaard: “I Believe that We Will All Be Saved” August 23, 2016 Kyle Roberts

Kierkegaard did not make a universalist view of salvation a cornerstone or major emphasis of his theology.

He was probably not a “dogmatic universalist” so much as a “hopeful universalist,” a precursor of the great Swiss Reformed theologian Karl Barth, in that respect.

His primary thrust, throughout much of his writings, was to re-emphasize the stringency of Christianity–the demands of discipleship.

Kierkegaard had a profound theology of sin, one which permeated his works, but it was–in good Lutheran fashion–blanketed by an even more grandiose view of God’s forgiving grace. And here in 1854, just one year from the end of his short life, he relishes the thought that God will finally welcome everyone. 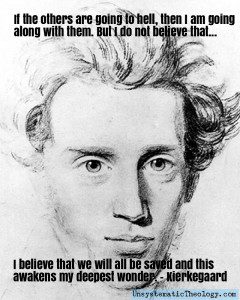 August 19, 2016
Isn't There Such a Thing As "Loving Coercion?" A Question Posed to Tom Oord
Next Post

August 30, 2016 "It's Never Been True that the Poor and Unemployed Do Nothing..."
Recent Comments
0 | Leave a Comment
"Good points. It is not wrong to love your country and do what is best ..."
Done with Religion When Churches Conflate Christianity and Nationalism ..."
"Well, you are misguided. Do you think you can figure out this God? If so, ..."
WitBrown Mother God: What Are We Doing ..."
"Obviously, you are missing the fact that The Creator God is sovereign and stands above ..."
WitBrown Mother God: What Are We Doing ..."
"A god so limited as to be gendered is too small to bother with."
Kyllein MacKellerann " Mother God: What Are We Doing ..."
Browse Our Archives
get the latest updates from
Unsystematic Theology
and the Patheos
Progressive Christian
Channel
POPULAR AT PATHEOS Progressive Christian
1