Being Good for Nothing

I suppose I shouldn’t have said anything. But letting these things slide is, shall we say, not my strong suit. So when a Facebook friend posted a picture of a gun mounted under a car’s steering 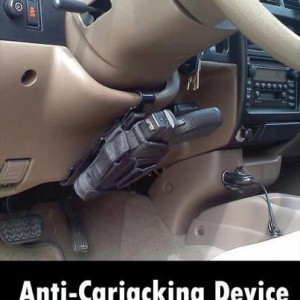 wheel with a caption about it being an “an anti-carjacking device,” accompanied by her wish that this were legal, I just had to put in my $.02 worth. I suggested that, given the prevalence of road rage, maybe more guns in cars might not be such a good thing. Only maybe there was the tiniest bit of sarcastic edge to the way I phrased it.

And, as these Facebook conversations go, someone else responded: “Wouldn’t you be more polite if you knew everyone else had a gun?” I don’t know whether the conversation got more serious for the other folks viewing the exchange at that point, but it certainly did for me. We had just entered the realm of religion. Here’s the thing. No, I’m not polite because I’m afraid of people around me with guns. I’m polite (at least I’m generally polite) because I just think people should be nice to one another. I’m happier, they’re happier, the world in general is happier if people are nice to one another. It’s a basic religious principle. Like, you know, the Golden Rule.

But there are plenty of folks in the world who believe that we need the guns in order to make people behave. Deterrence is at the heart of their theology. They figure that the sure knowledge of hellfire and damnation is the only thing that can keep people on the straight and narrow. Without the threat of hell, surely utter licentiousness would prevail and we would be sucked down into a whirlpool of degradation.

It’s a point of view to which they are entitled, but a) there’s no particular evidence that the threat of guns or the threat of hell actually makes people behave better on the average and b) really, how depressing can you get? Would you rather live in a world in which people are polite out of terror for their lives or souls, or would you rather be part of a community of people who cared for one another because love is the great sustaining principle? Isn’t it better, really, to be “good for nothing,” to be good without hope of reward or punishment other than the pleasure of doing what is right, kind, honoring of our connections?