Sin Isn’t Very Original: Dostoyevsky and the Freedom to Really Mess Things Up

I have a terrible confession: almost all of the calories I consume in a day, I consume after 8pm.

No, I don’t cook extravagant dinners late at night. Far from it. I eat junk.

I have even stopped doing it for, oh, two or three days at a time.

As a matter of fact, the thought that I shouldn’t do it goes through my head each evening. Right before I head for the fridge.

This is a terrible confession. But you who have not sinned may hurl the first stone. Perhaps binge eating doesn’t appeal to you. OK. But something does . . .

Yes, you know you’re going to face-palm when you wake up the next morning. But you just can’t stop yourself.

Many Christians blame it on “original sin,” but a quick survey of the wreckage around us shows that sin isn’t all that original. You who have not sinned may hurl the first stone.

OK, so I know that’s not what St. Augustine meant by the “original” in “original sin.” But there is certainly a connection between those seven deadly sins—wrath, greed, sloth, pride, lust, envy, and gluttony—and the sort of thing I’m talking about. They are all things we do because they come naturally. Each is an easy answer in the immediate moment, though each is fairly clearly not good for us in the long run, if by “good” we mean . . . well, what? Our animal selves?

Why do we fall so easily into those patterns of behavior described as the “deadly sins”? St. Augustine thought that it’s because we’re born that way—we are born into a fallen world. I don’t think St. Augustine’s answer quite survives Occam’s Razor—it is not the simplest explanation by a long shot.

Despite the fact that he’s been dead for a hundred and thirty-three years, Russian novelist Fyodor Dostoyevsky still has the best explanation, I think. His insights continue to challenge our most sacred of cows.

In his time, most Europeans believed that humanity had finally rounded a corner, and that the human future would be determined by rationality and reason—the greatest good for the greatest number.

Dostoyevsky was there to say this was not the case . . . and never will be the case.

Of all the reflections on why we human beings do what we do, from philosophers to neuroscientists, Fyodor Dostoyevsky still gets my vote for the deepest insight concerning why human beings make the choices we do:

“One’s own free unfettered choice, one’s own caprice, however wild it may be, one’s own fancy worked up at times to frenzy—is that very “most advantageous advantage” which we have overlooked, which comes under no classification and against which all systems and theories are continually being shattered to atoms.”

“And how do these wiseacres know that man wants a normal, a virtuous choice? What has made them conceive that man must want a rationally advantageous choice?

What man wants is simply independent choice, whatever that independence may cost and wherever it may lead.”

Why? That’s the question we ask in those face-palm moments: Why? Why do we do that?

Philosopher Crispin Sartwell puts it this way: “When you consult your experience, the fact that you are a body is more obvious than that two plus two equals four.”

There: I think that’s it. And that’s what Dostoyevsky knew is the case: The physical trumps the reasonable. Virtue. Reason. Those don’t feel like independent choice, do they? They feel, well . . . wholesome. And wholesome, like two plus two equals four, doesn’t feel real, doesn’t feel embodied.

Isn’t the concept of original sin merely a complex way of saying that human beings are born with bodies?

And isn’t this the wellspring of so much of Western thought? Our dualism, our denial of the body?

The doctrine of original sin is all about how merely being born with a body, merely entering this world, makes us sinful. Fallen. Dirty. In need of redemption.

Well. Maybe you don’t buy that. But, when we turn the terms into “head” and “heart,” which do you think is more important? Which should predominate? Isn’t one about me staying in my chair and the other about my trip to the fridge?

Consider some other “em” prefixes: em-brace, em-bryo, em-barrassment. Fleshy stuff, isn’t this “em,” this being “put into”? Getting into a body appears to put us into quite a fix. I’m reminded of that Punk classic from Richard Hell and the Voidoids: “It’s a gamble when you get a face.”

I think that the most damaging idea in all of Western philosophy and religion is the body / mind distinction.

It led to the belief in a distinction between the body and the soul, which I think is a psychologically damaging and completely erroneous idea.

It led to the erroneous idea that consciousness itself is somehow distinct from the functioning of the brain.

These errors permeate Western thinking. Perhaps it’s easiest to see in the statement, “I have a body.” How could a human being possibly “have” a body? We can “have” a beer or a smoke or a snack or a new car. We can even have an opinion. But we don’t have a body: we ARE a body.

Yes, Dostoyevsky said, people are capable of realizing the advantageous—what is good for us. But this knowledge, far from leading to rational decisions, shows us instead the way to REALLY mess things up.

I feel, as I head toward the fridge, liberated. I feel as if I were practicing free will. But am I? Or am I merely playing out my enslavement to one of the seven big sins, gluttony?

Dostoyevsky understood this dilemma. He was ruinously addicted to gambling. Still, in a world full of human beings whose actions can be predicted by statistics, what can we do? The irrational.

As Dostoyevsky had his Underground Man put it,

“The formula ‘two plus two equals five’ is not without its attractions.” 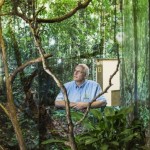 March 16, 2014 Think...Less?!
Recent Comments
1 Comment | Leave a Comment
Browse Our Archives
get the latest from
New Visions
Sign up for our newsletter
POPULAR AT PATHEOS New Visions
1