Tinfoil Hats and the Examined Life

Tinfoil Hats and the Examined Life May 22, 2014 David Breeden

Let’s say I tell you I’m wearing a tinfoil hat today . . . What does that say to you? Crazy? Paranoid? Safe from the mental meddling of governments and/or extraterrestrials?

The first known appearance of a tinfoil hat is in a science fiction story published in 1927 by the evolutionary biologist Julian Huxley. In that story, tinfoil hats prevent interference from mental telepathy.

Now, if you look for how tinfoil hats work on Yahoo Answers, you will discover this advice:

Tin foil does not work. I tried aluminum foil for my first thought screen helmet in 1998 and it was a failure. Thought screens made from velostat work. I’ve been making them since 1999 and sending them to abductees all over the world for free for 13 years.

Now, in case you’re like me and didn’t know, velostat is a packing material used to block electronic effects. So it goes.

I want to notice two things about this brief look at tinfoil hats. First, “tinfoil hat” has come to mean something way beyond merely a hat made of a particular material. And, second, how quickly we rocket from a discussion of tinfoil hats to a discussion of more efficient hats to evade thought surveillance.

The simplest example is perhaps flags. We create a flag to symbolize a nation or some other grouping of people. Then we create rules and customs around how flags must be treated.

I’ve heard people debate whether a particular piece of cloth is a flag or only bunting—because you can burn bunting, but burning a flag might get you into trouble.

We create a symbol, then we treat the symbol as a reality. The flag becomes the nation. And so on.

Educator Hugh Mearns had something to say about this propensity back in 1899 when he wrote a poem in response to a brouhaha in the town of Antigonish, Nova Scotia concerning a ghost sighting. One of the poem’s verses goes like this:

Last night I saw upon the stair,

A little man who wasn’t there,

He wasn’t there again today

It appears that we can make symbols of things that aren’t there at all. And then the symbol becomes a thing we can imagine.

We enter into pretend realms very early in childhood—you be Batman; I’ll be Joker. I’m an elephant. I’m a unicorn. When we play these games, we agree to certain rules. We agree to be bound by the logic of the game. Just as do the folks who wear tinfoil hats or who set out to make a better tinfoil hat. Or who imagine little men on stairs that aren’t there.

We can have “magical realism,” in which the world operates more or less as it does in our own world, but occasionally odd things happen—such as people flying away.

We can also have fantasy—that is, a world in which the rules we know do not apply. But even there, notice, there ARE rules of the game. Devotees of Star Trek or of the World of Warcraft will be quick to point out when an action goes outside the rules of that particular fantasy world.

We agree to the rules of a particular form of government. Or of economics. Of of religion. In these cases, usually, we have very little in the way of choice about playing the game—we are born in places where a set of games with rules are already in place—this is called culture and tradition.

Those who choose to ignore the rules are ostracized or punished. The rules of the games called culture and tradition often insist that you WILL see the little man on the stair—or at least say you do—, even if you cannot see the little man.

However, the difference between knowing you are playing a game with rules and thinking you are seeing reality are very different things, aren’t they?

Some games we choose, and some we don’t. No one is born wearing a tinfoil hat. Or saluting a particular flag. Or worshiping a particular god. Mostly, such games with their particular rules are forced upon us by geography or social status or educational attainment or mental health.

Am I really equating tin foil hats and patriotism, you might be asking. Yes, I am. Because I think the examined life requires that sort of examination. Until we see the games we are enmeshed in with some clarity, we have seen neither truth nor reality. We have not examined life. 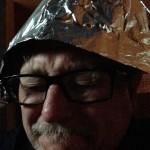 So, what’s your game? Do tinfoil hats come in handy?

May 24, 2014 Day Two
Recent Comments
0 | Leave a Comment
"Dear Author,As I read your words I am both "boosted", yet simultaneously frustrated for the ..."
Scot Reichman The Spiritual Practice of Agnosticism
"In other words it should be'celebrated' in the way we 'celevrate" Remembrance Day (11th hour ..."
Ivlia Blackburn The Meaning of Memorial Day
"Talk about that moral arc of the universe that bends toward justice is metaphysical talk—theology—not ..."
NoDifference #Charlottesville and Getting Real
"My tradition is Advaita Vedanta. Yoga is actually union with God. Advaita recognizes no duality ..."
Arthur Shimkus To Whom It May Concern: the ..."
Browse Our Archives
get the latest from
New Visions
Sign up for our newsletter
POPULAR AT PATHEOS New Visions
1