The Wrath of Pew and the Road to Character

The Wrath of Pew and the Road to Character May 14, 2015 David Breeden

Another Pew poll showing another major decline in church attendance appeared this week. This is becoming a habit! The 2015 poll shows church attendance is down nearly eight percent since the 2007 poll that had us all talking. And that mysterious group we hadn’t heard of until 2007, the “nones,” increased from 16% in the previous poll to nearly 24% of Americans. No religion. None. And no plans of finding one, at least in the traditional denominations.

And you know, I have to say it’s all good. I say that not because I’m a Humanist indulging in schadenfreude, but because I’m an American with some hopes for the future.

I’ve been reading the new book The Road to Character by conservative New York Times columnist David Brooks. The book sits at number two on the NYT bestseller list for nonfiction. It’s a good book. It’s not a conservative’s panacea as was a previous bestseller, The Closing of the American Mind. Allan Bloom’s book was target practice on straw men. Brooks is inadvertently showing us why traditional religion is in free fall in the US.

Brooks sets out on his exploration of how we develop character by distinguishing between “resume virtues” and “eulogy virtues”—that is, those things we do to survive and thrive in the culture we find ourselves in, and those things we do that we are remembered for after our deaths. Brooks says, “We live in a society that encourages us to think about how to have a great career but leaves many of us inarticulate about how to cultivate the inner life.” Interesting: a majority Christian culture inarticulate about cultivating an inner life. Churches flubbed their chance.

Easily retaining his title as “the liberal’s favorite conservative,” Brooks explores the lives of personalities as diverse as Dwight Eisenhower and Mary Ann Evans, the Victorian radical Unitarian better known by her pen name, George Eliot.

I think Brooks gets it right when he claims that we live a “life of vague moral aspiration.” Mainline religions stand accused. It sounds like an accusation echoing right out of the Victorian era, and it reminds me of that paragon of Victorian Unitarian values, Rev. James Freeman Clarke, and his famous—even infamous now—“salvation by character.”

Rev. Clarke would no doubt have packed up his duds and joined Brooks on the road to character.

Back to the Future 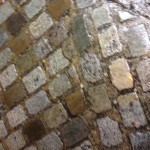 The idea that our characters can always use some work is far from being a quant Victorian sentiment or a conservative hobby horse. It is the unstated but driving force behind many popular movements in contemporary culture that are replacements for flaccid Christianity, from yoga and “mindfulness” to neo-Stoicism and renewed interest in Epicureanism. As poll after poll shows the collapse of mainline Christianity and the rise of “nones” and the spiritual but not religious, books and classes that promise paths to character development will no doubt proliferate like kudzu.

Contemporary writer Joan Didion defined character as, “the willingness to accept responsibility for one’s own life.” Didion and James Freeman Clarke underline something that we too often forget nowadays—that the purpose of inner work, the work of building character, is to accomplish outward work, the work of compassion and social justice. As David Brooks puts it, “The ultimate joys are moral joys.” Joy and character. This is what many of those missing from the pews have hit the road searching for.

What does the man who would become St Augustine and the woman who would become George Eliot have in common? According to Brooks, both show a willingness to do the inner work that turns to external good for humanity. Both found a road to character outside of the norms of their day. George Eliot perhaps sums that road up best: “It’s never too late to be what you might have been.”

May 21, 2015 That’s Why They Call It Practice
Recent Comments
0 | Leave a Comment
Browse Our Archives
get the latest from
New Visions
Sign up for our newsletter
POPULAR AT PATHEOS New Visions
1