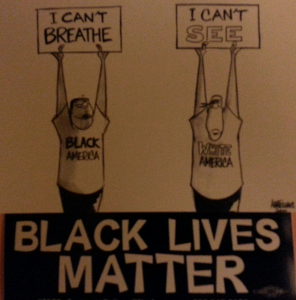 “The Federal Bureau of Investigation and the Bureau of Alcohol, Tobacco, Firearms, and Explosives are involved in the investigation into the incidents — though the FBI says it’s too soon to tell if they’re at all connected. The churches targeted have majority black congregations.

“They’re being investigated to determine who is responsible and what motives are behind them,” FBI spokesperson Paul Bresson told BuzzFeed News. “I’m not sure there is any reason to link them together at this point.””

I am going to point to a reason to link the burning of predominantly black churches together at this point – the ideology of white supremacy.

As a minister who has stood in a pulpit praying for her faithful people when our congregation was invaded during worship, I can only affirm and promote the words of the Revered Peter Morales, President of the Unitarian Universalist Association, in his public statement issued following the news of several African American churches burned last week:

“Where we choose to worship is sacred space. To violate that space is unconscionable.”

When sacred space is terrorized, when that which is sacred is desecrated by hate or fear, we must name it and organize against the power arrangement that makes it possible.

“At the Unitarian Universalist Association’s General Assembly in Portland, OR, delegates overwhelmingly passed an Action of Immediate Witness entitled ‘Support the Black Lives Matter Movement.’ It calls our Unitarian Universalist community to ‘take initiative in collaboration with local and national organizations fighting for racial justice against the harsh racist practices many black people are exposed to.’

We must not just proclaim black lives matter. We must also engage and act with love and compassion. It is the only way to stop the hatred from spreading. We can make a difference, and we must. It is a matter of life and death. Black lives matter.”

Be about it, dear ones.  Insist on naming the clear connections and work to undo the destructive and dehumanizing ideology of white supremacy in this land and inside of us.  As Dr. Cornel West pointed out in the 2015 Ware Lecture last week, if he can look inside and find the ideas of white supremacy living in him, no doubt each of us can, too.

Unitarian Universalists are a people of faith who believe in the power of love to resist the power of fear, hatred, and greed.  We are a people with a gift for connecting the dots of power, terror, and oppression.  Let’s be about it, beloveds.

July 2, 2015 Black Churches, Black Lives, the Legacy of Whiteness
Recent Comments
0 | Leave a Comment
Browse Our Archives
get the latest from
New Visions
Sign up for our newsletter
POPULAR AT PATHEOS New Visions
1