On the Right to Take Up Space

On the Right to Take Up Space August 6, 2015 David Breeden 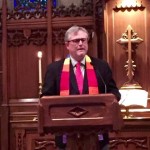 Power is about controlling space.

Power is about controlling space.

But here’s the thing: each and every human being takes up space.

The most radical thing a human being or a group of human beings can say is, “I take up space and I’m here.”

Feminist critic Soraya L. Chemaly wrote an article titled “Our Society Urges Girls To Take Up Less Space And Boys To Take Up More, And It Needs To Stop.”

And yes, the title pretty well sums up the article. Chemaly claims that girls are trained starting at a young age to—quote—“be as small as possible (so) we will love you more.” End quote.

The most radical thing a human being can do is say, “I’m here and I WILL take up my space.”

Freedom is all about whether or not you get to take up the space you need to inhabit.

I’m white. When I walk into a restaurant, they take one look at me and they surmise that I’ve got a credit card (that works) and so I’m welcome to take up their space.

People don’t even tell me—nobody except my wife and my doctor—that I ought to go on a diet . . . because I’m taking up too much space.

That’s privilege: I’m here and nobody asks me why I’m taking up space. I have freedom.

I’m NOT bragging. I’m condemning. I’m calling out.
Because here’s the truth: I don’t have any more right to take up space than anybody else.

What is Christianity, or who is Christ actually for us today? The age when we could tell people that with words—whether with theological or pious words—is past . . .

Carroll sets out to answer Bonhoeffer’s question, “Who is Christ actually for us today?” by asking another question: “Who was Christ when he was alive.”

Carroll’s answer: He was Jesus, a poor Jewish Palestinian peasant executed by the Romans.

Then Carroll looks at the circumstances of the time the first Gospel, the Gospel of Mark, was written, which was sometime around the year 70 of the Common Era.

Well—the Roman siege of the city of Jerusalem was happening, an event that eventually led to the destruction of the Second Temple and the displacement of most Jews from Jerusalem and Palestine.

During that long Roman siege of Jerusalem, the Romans crucified five hundred Jews per day. They set up crosses around the walls of Jerusalem and crucified Jews in order to send a message to the defenders of Jerusalem: Your Jewish lives do not matter. You have no right to take up space.

And the Romans didn’t clean up the mess at night. They left the crosses and the broken bodies on the crosses to rot. And, when Jerusalem fell, there were more than 10,000 crosses surrounding the city.

What happens when we re-contextualize the crucifixion of Jesus into that context? Just another broken Jewish body . . . another person told “Your life does not matter. You have no right to take up space . . .”

To the Romans, Jesus—and all Jews—were taking up too much space in the wrong place. So the Romans took away the right of Jesus and Jews like him to take up space: took away their right to be fully human where and how they were.

. . . You see where I’m going with this. Let’s re-contextualize this yet again: where would that poor brown preaching peasant be today, in the United States?

Look at the carnage around us for the answer. Look at the crosses . . . in Ferguson and Charleston and Baltimore and Dallas and on and on . . . The crosses that say, “Your Black life doesn’t matter.
You have no right to take up space.”

Hear me: It’s not the cops.
It’s not even the crazy White Supremacists.
It wasn’t the Roman soldiers.
It’s governments that exist to control space.
It’s the dominant culture that refuses to see that Black Lives Matter
and that a young black man walking home from the store,
or a black woman driving to a job interview,
or a group studying the bible in a church basement . . .
have the right to take up space.

I don’t care if it’s your specific religion; or if it’s God; or if it’s Humanism . . . or morality or ethics . . . whatever motivates you, we all are obligated . . . obligated . . . to change the culture; to change the way space gets controlled; to work until Black Lives Matter and everyone, EVERYONE has the right to take up the space
it takes to be free in our world.

July 30, 2015
Ta-Nehisi Coates: Essential Summer Reading (and why freedom of the press was invented)
Next Post

August 12, 2015 The Deciduous Universe
Recent Comments
0 | Leave a Comment
Browse Our Archives
get the latest from
New Visions
Sign up for our newsletter
POPULAR AT PATHEOS New Visions
1