Alternative Facts and Reason in Religion

I say this as someone who is not scientifically trained. I’m a poet and a minister. But I know that artists and ministers must live with facts just like everyone else.

We now know that reason is merely another way of feeling; another way of thinking—thinking fast and thinking slow—and this is important knowledge because it breaks down that false dichotomy between the head and the heart.

The word fact derives from the Latin word factum, meaning a deed. Something that’s been done.

Truth, on the other hand, is something that’s solid. The word derives from Old English and goes back to the word dru—it meant “tree.” Something very solid. It’s where the word druid comes from.

A fact is something that has been done, and a truth is something solid that you can point to. A subjective feeling can’t be either of those.

Facts and truths are tangible and communal.

The word theory, on the other hand, derives from Greek, theoria, and it means speculation—as in spectacle—something you look at but you don’t necessarily know what you’re looking at. (In science, theory means something a bit different.)

One way to look at it is that you can feel a fact, but you can’t feel a fact into non-existence. To take a simple example, say you run over a squirrel when you’re out driving. You can feel the fact—you really, really wish you hadn’t killed that squirrel. But no matter how much regret you feel, you can’t un-kill the squirrel. The fact remains that the squirrel is dead.

This is what many people can’t understand about creation science—it may hurt that there isn’t a reasoning god who made the earth and all its animals. But no matter how much that hurts, it doesn’t unmake the fact that the earth evolved.

Facts matter. Truth matters. Religion is as good a place as any to start weeding out alternative facts and truths. The good old Unitarian tradition did that for years.

Reason was the wedge issue among Congregationalist ministers in the eighteenth century. Unitarians just couldn’t square the concept of the Trinity with logic. The dogma didn’t make sense; they weren’t about to take something on faith alone; and so they rejected the age-old concept of the Trinity.

Later, in the nineteenth century, miracles came under fire: how could miracles happen in the material world as we understand it? Belief in miracles just didn’t square with reality, and thus many Unitarians rejected it.

And on it went. Textual criticism proved that the bible wasn’t infallible. And, in the early twentieth century, some Unitarian ministers, such as John Dietrich, began to wonder if the Western notion of God made logical sense. Soon, the entire idea of what religion means came in for questioning.

All along the way, there have been congregations of people who have required that what they believe square as well as possible with the known facts. As the old saying goes, we Unitarians don’t leave our brains at the door.

In this way Unitarianism is countercultural. American culture has always been irrational, running off into witch-hunts and crazes and Great Awakenings. It’s not that Unitarians don’t “do what the Spirit says do,” it’s just that we know that “Spirit” is a construct of the human mind to explain a particular set of emotions.

All along the way, Unitarians have agreed with Vaclav Havel:

Whether all is really lost

or not depends entirely on

whether or not I am lost.

We are still here. We are not lost. 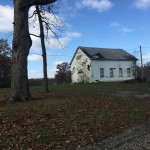 January 31, 2017 Blessing the Organizers
Recent Comments
0 | Leave a Comment
"Dear Author,As I read your words I am both "boosted", yet simultaneously frustrated for the ..."
Scot Reichman The Spiritual Practice of Agnosticism
"In other words it should be'celebrated' in the way we 'celevrate" Remembrance Day (11th hour ..."
Ivlia Blackburn The Meaning of Memorial Day
"Talk about that moral arc of the universe that bends toward justice is metaphysical talk—theology—not ..."
NoDifference #Charlottesville and Getting Real
"My tradition is Advaita Vedanta. Yoga is actually union with God. Advaita recognizes no duality ..."
Arthur Shimkus To Whom It May Concern: the ..."
Browse Our Archives
get the latest from
New Visions
Sign up for our newsletter
POPULAR AT PATHEOS New Visions
1