Assumptions are Imaginary But They’re not Social

Assumptions are Imaginary But They’re not Social March 30, 2017 David Breeden

In Notes of a Native Son, James Baldwin wrote,

Society is held together by our need; we bind it together with legend, myth, coercion, fearing that without it we will be hurled into that void, within which, like the earth before the Word was spoken, the foundations of society are hidden. From this void—ourselves—it is the function of society to protect us; but it is only this void, our unknown selves, demanding, forever, a new act of creation, which can save us—“from the evil that is in the world.”

The void. The creative void where we face ourselves, the selves we do not know, and find . . . new legends, now myth; myths and legends that do not coerce.

The Western Europeans who came to North America on the Mayflower—being quite full of biblical lore—made a covenant in the year 1620 called “The Mayflower Compact.” (A covenant was something Yahweh had made with Abraham, so they thought it was a good idea too.)

The Mayflower Compact says this, for example—

Having undertaken, for the Glory of God, and advancements of the Christian faith and honor of our King and Country, a voyage to plant the first colony in the Northern parts of Virginia, do by these presents, solemnly and mutually, in the presence of God, and one another, covenant and combine ourselves together into a civil body politic; for our better ordering, and preservation and furtherance of the ends aforesaid . . .

They went on to write—

and by virtue hereof to enact, constitute, and frame, such just and equal laws, ordinances, acts, constitutions, and offices, from time to time, as shall be thought most meet and convenient for the general good of the colony; unto which we promise all due submission and obedience.

There are several disturbing things about this little document designed to hold society together. For one, they didn’t make it to Virginia, which perhaps reveals one of the problems with patriarchy.

But a larger problem is just who this covenant was “most meet and convenient” for. What are the hidden assumptions about what a “civil body politic” might look like?.

The Mayflower Compact embodies a “social imaginary,” which is a set of values, narratives, and symbols common to a particular social group and the social system that develops from it.

James Baldwin knew that we create documents such as the Mayflower Compact out of fear:

fearing that without it we will be hurled into that void, within which, like the earth before the Word was spoken, the foundations of society are hidden.

There is a “we” in a covenant that creates an inside and an outside and exclusivity and excluded-ness. Was everyone—even on that one little boat— of the same mind and living in the same social imaginary?

For many of the signers of the Mayflower Compact, one assumption was that men and women were not equal; another assumption was that their god was the only true god; another was their concept of property and who could own it and what ownership meant. And on . . . Unstated assumptions. Their social imaginary was bound, as James Baldwin put it, “with legend, myth, coercion.”

Steeped as they were in the Western European reading of the bible’s myths and legends, the signers of the Mayflower Compact knew “the evil that was in the world.” That evil was the other, and that other was non-white, non-Protestant men; it was all women, even those in their own group. It was eros and a hundred other human emotions. Those were the void that had to be held off.

Here’s the thing: Most of the people in the United States today who make the rules they consider “most meet and convenient for the general good” still look like those signers of that document

Not very imaginative, are we? 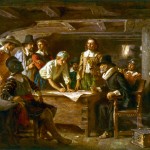 April 4, 2017 In the Name of Love
Recent Comments
0 | Leave a Comment
"Dear Author,As I read your words I am both "boosted", yet simultaneously frustrated for the ..."
Scot Reichman The Spiritual Practice of Agnosticism
"In other words it should be'celebrated' in the way we 'celevrate" Remembrance Day (11th hour ..."
Ivlia Blackburn The Meaning of Memorial Day
"Talk about that moral arc of the universe that bends toward justice is metaphysical talk—theology—not ..."
NoDifference #Charlottesville and Getting Real
"My tradition is Advaita Vedanta. Yoga is actually union with God. Advaita recognizes no duality ..."
Arthur Shimkus To Whom It May Concern: the ..."
Browse Our Archives
get the latest from
New Visions
Sign up for our newsletter
POPULAR AT PATHEOS New Visions
1