True confession: I don’t know a chancel from a narthex. This can become a liability when one is, as I am, employed as a Unitarian Universalist minister. When I visit places, I’ll get an instruction such as “sit to the right on the cancel.” Or the narthex. I don’t rememberer. Anyway, it’s a liability.

I’m sure that those who notice my confusion (I do try to hide it) think I’m being willfully Humanist and anti-religion about it. I’m not. I don’t know because I was raised Pentecostal. Pentecostals, like Humanists, don’t use those terms.

I don’t know if Pentecostals don’t use churchy words because—back in the bad ‘ol days—they considered ten-dollar words “Popish” or if the spaces Pentecostals inhabited for worship didn’t necessitate those words. After all, a revival tent has a pulpit and an alter and some seats of some sort. That’s about it. Narthexes and chancels don’t fit on the truck.

One of the churches where I spent a lot of time as a kid was a storefront. Everything in the building was temporary. We could move the church out and throw it on a truck if the lease got called. The space would have made a very fine spot for a hardware store. Nowadays, I think the space is occupied by a Big Lots, which makes spiritual sense to me, somehow.

It was the pulpit that was the center of the Pentecostal celebrations of my youth. The pulpit had to be sturdy. I’ve seen more than one preacher climb the pulpit and stand on top. The Spirit—for a reason that has remained mysterious to me—tells preachers to do that sometimes.

I learned the social hierarchy of Christendom—at least the Christendom of the Ohio River Valley—very young. The Presbyterians were the top dogs. They had brick buildings and even stained glass windows. I’m supposing they had narthexes and such as well. The Methodists were next. In town, they had brick buildings; in the country, they build white wooden churches, very austere. Baptists came in many varieties, from the “Hardshells” and “Primitives” who were as poor as we were, to some very citified folks in brick churches. Then there was us, Pentecostals of various stripes, from “Oneness” holy rollers (my family) to Apostolics. In the country these churches were often converted houses. It town, they were storefronts, rented space.

As a side-note I should mention that Episcopalians, Lutherans, and Congregationalists did not penetrate the dark hardwood forests of the Ozarks.  And the Catholics were always over by the river.

In the great sea of poor, yellow clay farms, the church told the social class and the social class determined the worship style. Presbyterians were God’s Frozen People. The Methodists and the Baptists had eschewed noisy worship. Then there was us. Improvised. Temporary. And loud.

Nowadays I go back to those clay hills only to bury family. Nowadays I’m a Humanist. I preach in a large, expensive building. But it doesn’t have a narthex, so far as I know. Or a sanctuary, for that matter. And for me, church is still best done as improvisation. It’s a place to have fun, think about big stuff, and get loud in a way that feels right, right now. Still, somehow, I think it’s safest if you can throw it all on a truck fast if you have to. You never know when a Big Lots is going to get your lease. 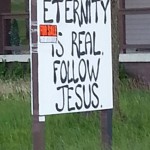 June 1, 2017 Getting Tough
Recent Comments
0 | Leave a Comment
Browse Our Archives
get the latest from
New Visions
Sign up for our newsletter
POPULAR AT PATHEOS New Visions
1