The Lesson of Sunday School Cards

My dad was out of work a lot when I was a kid, so we traveled from town to town in the Southeast. Consequently, I attended all sorts of churches, from strip mall storefronts to white wooden boxes with a steeple on top. The churches were always in the Pentecostal / Apostolic range, which in those days meant that nearly everyone attending was poor and everything about the operation was a bit out of date.

Out of date isn’t always bad, however. Something I ran into several times as a kid was Sunday school lesson cards. I’ve looked for these since, and there are some out there, all being sold as antiques. A typical lesson card was the size of a playing card and had a Bible verse and a color lithograph illustration.

I’ve lost all that I collected by now, but my favorite was a lesson about Mark 2:4. The verse read, “And when they could not come nigh unto him for the press, they uncovered the roof where he was.” The illustration was of four men in typical imaginary-bible-times dress lowering their gnarled and prostrate friend through a hole in the roof of a flat-topped house. The house was surrounded by blobs that represented bunches of people.

The backstory from The Gospel According to Mark was that Jesus had gone to a house and, when the locals discovered his presence in the village, everyone turned out to see him. The four friends had brought their distressed friend to get him healed, only to find that it was impossible to get to Jesus for the crowds. So they headed for the roof.

The moral of the story—for so it was that those Sunday school cards each and every one had a moral—was that going the extra mile for Jesus was a darn good idea. Even if it meant digging through somebody’s roof.

I dutifully memorized the verse and took the lesson to heart. And I got to take the card home to treasure. What a deal.

And the moral of my little story? Hmmm. Send the kids home with something. And morality is always more complex that it looks. 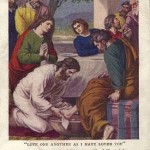 June 29, 2017 Loving What Happens
Recent Comments
0 | Leave a Comment
"Dear Author,As I read your words I am both "boosted", yet simultaneously frustrated for the ..."
Scot Reichman The Spiritual Practice of Agnosticism
"In other words it should be'celebrated' in the way we 'celevrate" Remembrance Day (11th hour ..."
Ivlia Blackburn The Meaning of Memorial Day
"Talk about that moral arc of the universe that bends toward justice is metaphysical talk—theology—not ..."
NoDifference #Charlottesville and Getting Real
"My tradition is Advaita Vedanta. Yoga is actually union with God. Advaita recognizes no duality ..."
Arthur Shimkus To Whom It May Concern: the ..."
Browse Our Archives
get the latest from
New Visions
Sign up for our newsletter
POPULAR AT PATHEOS New Visions
1