Murder and What’s in a Story

Why do we kill each other? I have to admit that when I walk along a street and look at the apartments and houses, I don’t wonder what evil lurks in the hearts of the neighbors. Instead I wonder why so many people go day after day, year after year, without killing anybody. It’s not that there’s no opportunity, after all. Or motive.

For the ancient Hebrews, murder was how it all got started. In Genesis, chapter 4, we see this:

Now Abel was a shepherd and Cain was a farmer. It came to pass that Cain brought an offering of produce to The LORD . Abel brought parts of a first-born lamb.

The LORD  preferred Abel’s offering to Cain’s. This made Cain angry and he lost it. The LORD  said to Cain, “Why are you angry, and why are you losing it? If you do the right thing, won’t you be accepted? And if you do not do the right thing, sin is lurking at the door; sin wants you, but you must master it.”

Then The LORD  said to Cain, “Where’s your brother?” Cain replied, “How should I know? Am I my brother’s keeper?”

Cain said to The LORD , “That’s more punishment than I can bear! Today you have driven me away from the soil, and I shall be hidden from your face; I shall be a fugitive and a wanderer on the earth, and anyone who meets me might kill me.”

The LORD said, “Not so! Whoever kills Cain will suffer a sevenfold vengeance.”

Then The LORD put a mark on Cain, so that no one who met him would kill him. Thus Cain went away from the presence of The LORD , and settled in the land of Nod, east of Eden.

Admittedly, Cain’s killing of Abel is the definition of a cold case. Yet, we have what purports to be an on-the-scene report. Still, it’s not all clear what all of it means.

When I was a kid in Sunday school, I learned that Cain killed Abel because of jealousy. Cain was jealous because The LORD  liked Abel’s offering more: “You’ve all felt jealous, haven’t you, children?”

Yes, as a matter of fact . . . and I’d contemplated offing a cousin or too as well.

Later I read that this story may be a parable for the ancient rivalry between farmers, in the case of Cain, and herdsmen, in the case of Abel. The LORD is assumed to love meat in Hebrew tradition, and the temple would become quite the barbecue shop.

As you probably know, this story was long used by Christians in the United States to justify slavery, because, claimed the ministers, non-whites were “of the race of Cain,” and” The LORD set a mark upon Cain.”  Mansplaining and whitesplaining have been going on for a while now.

This story also contains the first mention of a concept that would be a big hit in Jewish and Christian writings—sin. Sin, the story tells us, is like a beast waiting at the door, and The LORD warns Cain about sin’s nefarious hanging-out habit.

Unlike my Pentecostal Sunday school teachers, some rabbis have asked us to look at what happens after Cain heads for the Land of Nod. To look at the rest of the story:

Cain and his wife had sex and she gave birth to Enoch. Enoch built a city and named it Enoch after his son Enoch. To Enoch was born Irad; and Irad was the father of Mehujael, and Mehujael the father of Methushael, and Methushael the father of Lamech. Lamech had two wives; one was named Adah and the other was named Zillah. Adah gave birth to Jabal; he was the ancestor of those people who live in tents and have livestock. His brother’s name was Jubal; he was the ancestor of all those who play the lyre and pipes. Zillah also gave birth to Tubal-Cain, who made all sorts of bronze and iron tools.

Disobedience and murder set it all in motion.

Genesis is an interesting book. Sure, it’s rife with weird things, such as where Cain’s wife came from and how Enoch built a city when he was the only daddy in town, but it sure is interesting to see what the ancient Hebrews thought about the world. At the beginning of Genesis, The LORD is all-powerful, creating the heavens and the earth, but by the end, The LORD has been happy, sad, mad, and even fought to a draw by Jacob in a wrestling match.

Does the fear of divine punishment really keep people in line? Hebrew writings indicate the answer is “no.” Cain killed Abel when he and The LORD were on a first-name basis, as it were.

What keeps people in line, doing the right thing?  It’s hard to say  . . .  But as it turns out, I never did kill any of my cousins. 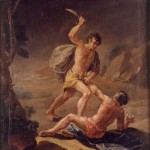 June 15, 2017 The Stories We Listen To; the Stories We Tell Ourselves
Recent Comments
0 | Leave a Comment
Browse Our Archives
get the latest from
New Visions
Sign up for our newsletter
POPULAR AT PATHEOS New Visions
1

The Man Who Went to Heaven—and...
Wake Up Call
Related posts from UU Collective